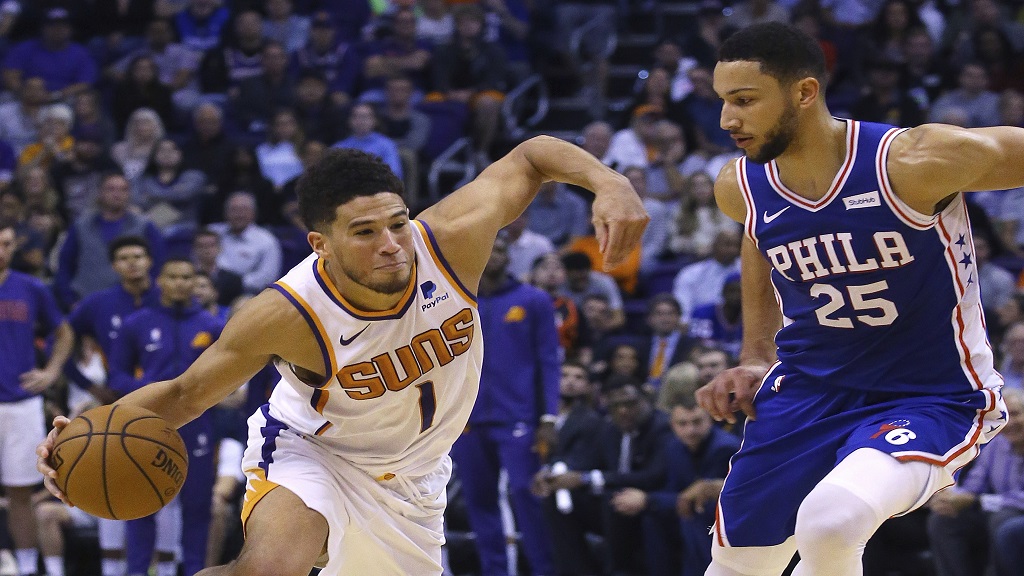 Devin Booker inspired the Phoenix Suns as the Philadelphia 76ers suffered their first defeat of the NBA season, while the injury-ravaged Golden State Warriors prevailed.

Booker scored 40 points to lead the Suns past the previously undefeated 76ers 114-109 in Phoenix on Monday.

Ricky Rubio chipped in with 21 points and 10 assists for the Suns (5-2), who are on a three-game winning streak.

The 76ers (5-1) – playing without suspended star Joel Embiid – were led by Al Horford's 32 points on the road.

Meanwhile, the Warriors claimed just their second victory of the season after upstaging the Portland Trail Blazers 127-118.

Without injured stars Stephen Curry, Klay Thompson, Draymond Green and D'Angelo Russell, the Warriors improved to 2-5 thanks to 36 points and 13 rebounds from rookie Eric Paschall.

Damian Lillard's 39 points and a double-double from Hassan Whiteside (22 points, 11 rebounds) were not enough for the visiting Trail Blazers in San Francisco.

Giannis Antetokounmpo posted 34 points and 15 rebounds to lead the Milwaukee Bucks past the Minnesota Timberwolves 134-106. The reigning MVP has recorded a double-double in all seven games this season.

Kyrie Irving put up 39 points and nine assists as the Brooklyn Nets withstood Brandon Ingram's career-high 40 points for a 135-125 victory against the New Orleans Pelicans.

The Houston Rockets topped the Memphis Grizzlies 107-100 behind James Harden's 44 points in the absence of rested star Russell Westbrook.

It was a quiet night for Ben Simmons, who was limited to just six points on two-of-eight shooting from the floor against the Suns.

Giannis with the coast-to-coast slam!

There was just no stopping 'The Greek Freak' against the Timberwolves in Minnesota.

LeBron James and his in-form Los Angeles Lakers will look to extend their winning streak to six games when they visit the struggling Chicago Bulls on Tuesday.