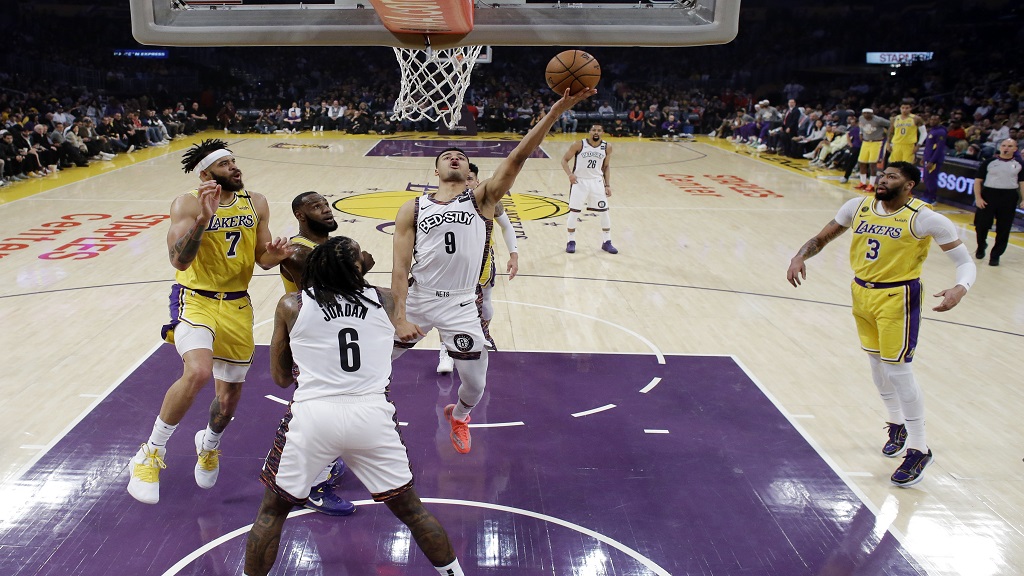 Brooklyn Nets' Timothe Luwawu-Cabarrot (9) drives to the basket against the Los Angeles Lakers during the first half of an NBA basketball game Tuesday, March 10, 2020, in Los Angeles. (AP Photo/Marcio Jose Sanchez).

The Brooklyn Nets held on to beat LeBron James and the Western Conference-leading Los Angeles Lakers 104-102 in the NBA.

Spencer Dinwiddie (23 points) hit the tie-breaking jumper with 28.3 seconds remaining as the Nets upstaged the streaking Lakers at Staples Center in Los Angeles on Tuesday.

The Lakers' four-game winning streak came to an end after Anthony Davis (26 points) missed a three-pointer at the buzzer.

James had 29 points, 12 rebounds and nine assists for the Lakers (49-14), who were unable to close the gap on the slumping Milwaukee Bucks (53-12) for the league's best record.

The Los Angeles Clippers bounced back from Sunday's loss to the Lakers by routing the Golden State Warriors 131-107 away from home.

Kawhi Leonard posted 23 points before sitting out the entire fourth quarter, along with the rest of the Clippers' starters.

Jayson Tatum put up 30 points for the Boston Celtics, who reached the postseason for the sixth consecutive year. Gordon Hayward added 27 points and 10 rebounds in the 114-111 triumph at the Indiana Pacers.

Luka Doncic registered 38 points, but it was not enough for the Dallas Mavericks, who lost 119-109 at the San Antonio Spurs.

The Washington Wizards benefited from another big Bradley Beal performance in their 122-115 victory over the New York Knicks. Beal had 40 points, surpassing 25-plus points for the 22nd time in 23 games.

With Stephen Curry sidelined by the flu, Mychal Mulder played guard and the 25-year-old struggled for the Warriors. Mulder was one-of-nine from the field and 0 of seven from three-point range for three points in 26 minutes.

Aron Baynes made history on Friday. The Australian joined Harden as the only players in NBA history with 30-plus points, 15-plus rebounds and eight or more three-pointers in a game following his career-high 37 points, 16 rebounds and nine three-pointers for the Suns. However, Baynes was just three-of-14 from the field and one-of-seven from beyond the arc for just seven points against the Trail Blazers on Tuesday. He tallied two rebounds in 34 minutes.

After an embarrassing loss away to the lowly Warriors, the Philadelphia 76ers (38-26) are back on home court against the Detroit Pistons (20-45) on Wednesday. The 76ers are 28-2 in Philadelphia, compared to 10-24 on the road.