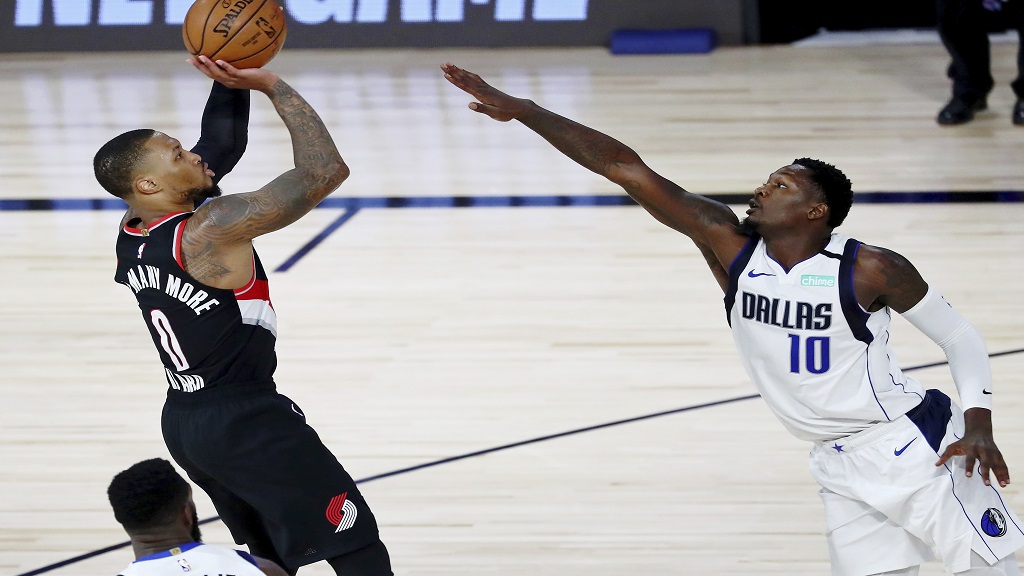 Damian Lillard produced an incredible performance to lift the Portland Trail Blazers, while Giannis Antetokounmpo was ejected in the NBA on Tuesday.

Lillard scored 61 points to guide the Trail Blazers past the Dallas Mavericks 134-131 and into eighth place in the Western Conference.

The guard was in stunning form, going nine-of-17 from three-point range at the Walt Disney World Resort.

Kristaps Porzingis scored 36 points for the Mavericks, while Luka Doncic had a double-double of 25 points and 10 assists.

Antetokounmpo was ejected in the second quarter of the Bucks' 126-113 win over the Washington Wizards.

The reigning NBA MVP head-butted Moritz Wagner, having scored 12 points and had nine rebounds in 10 minutes.

Brook Lopez finished with 24 points for the Bucks.

Devin Booker had 35 points and nine rebounds as the Phoenix Suns beat the Philadelphia 76ers 130-117 for a seventh straight win.

Jayson Tatum helped the Boston Celtics past the Memphis Grizzlies 122-107 thanks to 29 points. In the same game, Ja Morant had 26 points and 13 assists for the Grizzlies.

D.J. Augustin struggled from the field, going one-of-eight for just six points in the Orlando Magic's 108-96 loss to the Brooklyn Nets.

Lillard had his third game this season with 60-plus points and five-plus assists and no player has had more than two such games in their career since the merger, according to STATS.