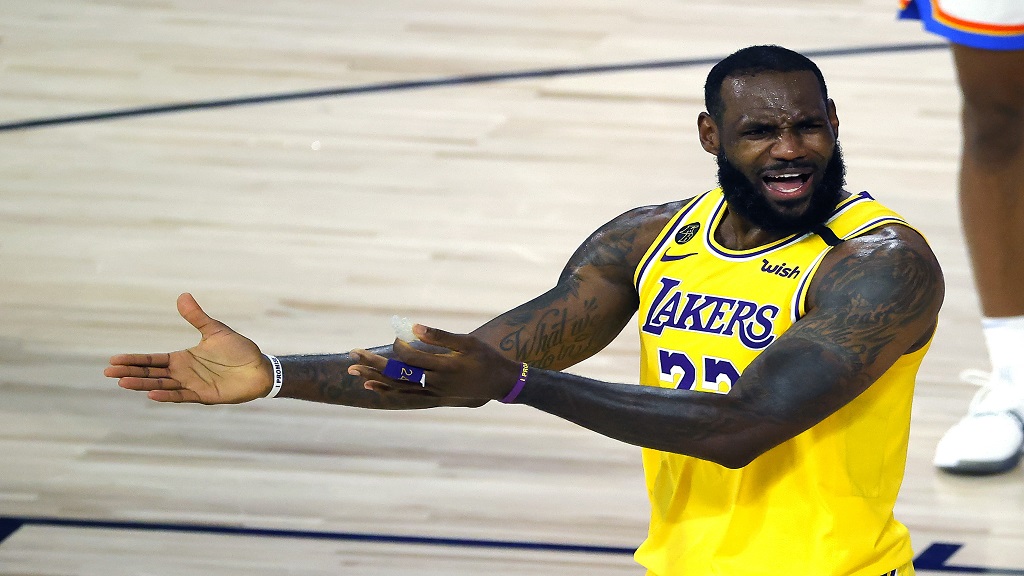 LeBron James of the Los Angeles Lakers reacts to a call against the Oklahoma City Thunder during the second half of an NBA basketball game Wednesday, Aug. 5, 2020, in Lake Buena Vista, Fla. (Kevin C. Cox/Pool Photo via AP).

The Los Angeles Lakers were well beaten in the NBA on Wednesday, while Joel Embiid led the Philadelphia 76ers to a win.

With the top seed in the Western Conference secured, the Lakers went down to the Oklahoma City Thunder 105-86.

Chris Paul top-scored in the Thunder's victory with 21 points.

Embiid's double-double of 30 points and 11 rebounds saw the 76ers past the Washington Wizards 107-98.

Philadelphia suffered a setback during their win, with Ben Simmons hurting his knee in the third quarter.

The Boston Celtics had seven players in double-digits for points in a 149-115 thrashing of the Brooklyn Nets. Jaylen Brown (21), Jayson Tatum (19), Gordon Hayward (18) and Robert Williams III (18) led the way.

Rudy Gobert had a double-double of 21 points and 16 rebounds in the Utah Jazz's 124-115 victory over the Memphis Grizzlies.

Fred VanVleet went eight-of-13 from the field for 21 points, to go with 10 assists, in the Toronto Raptors' 109-99 win against the Orlando Magic.

The Lakers (51-16) will try to bounce back on Thursday in a blockbuster clash with the Houston Rockets (42-25).