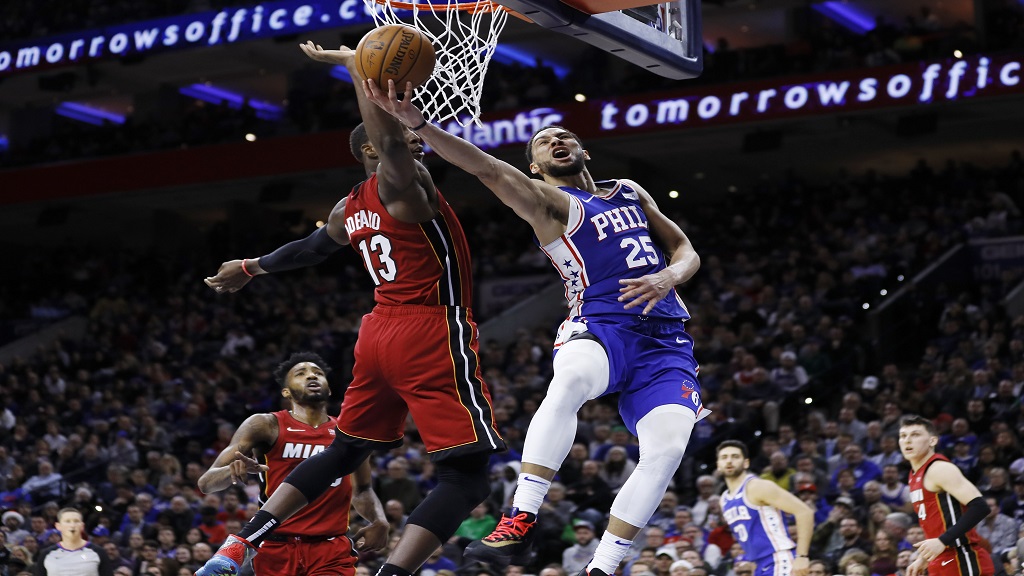 Philadelphia 76ers' Ben Simmons, right, goes up for a shot against Miami Heat's Bam Adebayo during the second half of an NBA basketball game, Wednesday, Dec. 18, 2019, in Philadelphia. (AP Photo/Matt Slocum).

The Miami Heat snapped the Philadelphia 76ers' unbeaten start at home with a 108-104 victory in the NBA.

Philadelphia boasted a 14-0 record on home court until Wednesday's defeat to their Eastern Conference rivals at Wells Fargo Center.

Kemba Walker's 32 points were a game high as the Celtics left Dallas with the win.

After a franchise-worst 13-game losing streak, the New Orleans Pelicans upstaged the Minnesota Timberwolves 107-99. Brandon Ingram had 34 points for the visiting Pelicans.

Defending champions the Toronto Raptors were 112-99 winners against the Detroit Pistons thanks to Kyle Lowry's 20 points, 10 rebounds and 10 assists.

Jamal Murray's 33 points and Nikola Jokic's double-double of 18 points and 12 assists fuelled the Denver Nuggets' 113-104 victory over the Orlando Magic.

Already without star guard Fred VanVleet, the Raptors lost Marc Gasol and Norman Powell to injures in Detroit. Gasol left with a hamstring strain in the opening quarter before Nowell departed in the fourth due to his left shoulder.

Thaddeus Young made just one field goal from 10 attempts and was 0 of four from beyond the arc in 20 minutes as the Chicago Bulls edged the Washington Wizards 110-109 in overtime.

It is the battle everyone has been waiting for. Thursday's showdown sees Western Conference leaders the Los Angeles Lakers visit Eastern Conference pacesetters the Milwaukee Bucks. All eyes will be on LeBron James and reigning MVP Giannis Antetokounmpo.

LeBron: Lakers determined to bounce back after road streak ends