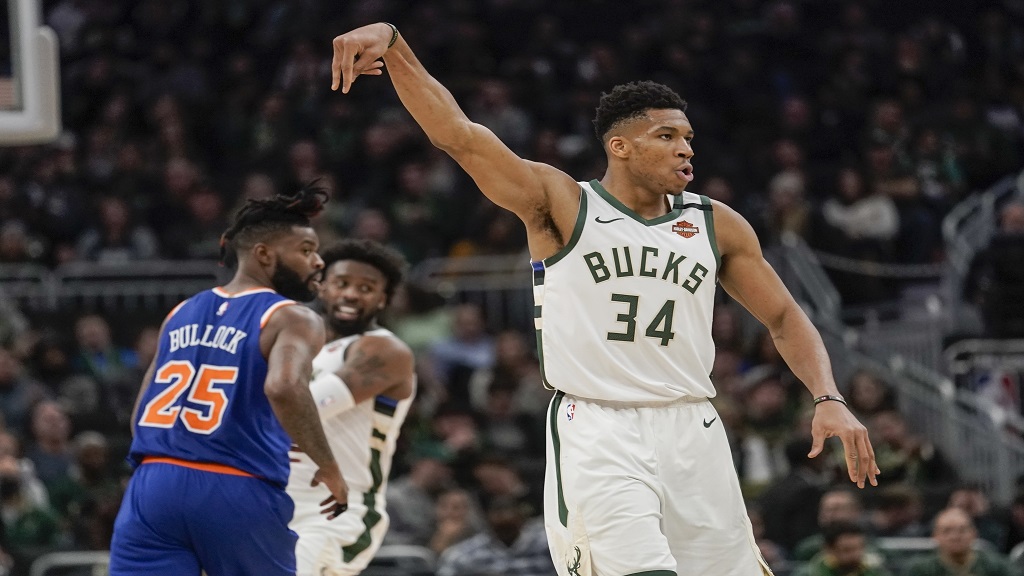 Milwaukee Bucks' Giannis Antetokounmpo reacts to his three-point basket during the second half of an NBA basketball game against the New York Knicks Tuesday, Jan. 14, 2020, in Milwaukee. (AP Photo/Morry Gash).

Giannis Antetokounmpo showed no mercy in a devastating 21-minute display as the NBA-leading Milwaukee Bucks defeated the New York Knicks 128-102.

Antetokounmpo only played three quarters but the reigning MVP still scored 37 points to lead the Bucks past the Knicks on Tuesday.

The Bucks, who led by as many as 35 points, improved their league-best record to 36-6 with a fourth consecutive victory.

Lou Williams contributed 24 points off the bench for the Clippers, who were again without injured star Paul George.

The Utah Jazz made it 10 successive wins by beating the Brooklyn Nets 118-107. Joe Ingles matched his career high with 27 points, while Rudy Gobert had 22 points and 18 rebounds. Kyrie Irving recorded 32 points and 11 assists for the Nets.

James Harden's 41 points were not enough after the Houston Rockets fell 121-110 to the in-form Memphis Grizzlies. Rookie Ja Morant put up 26 points as the Grizzlies won their sixth successive game.

Royce O'Neal did not post a point against the Nets. In 32 minutes, he was 0 of five from the floor, while he missed all three of his three-point attempts.

Can the Los Angeles Lakers (33-7) make it 10 straight wins? The Western Conference leaders play host to the Orlando Magic (19-21) on Wednesday.