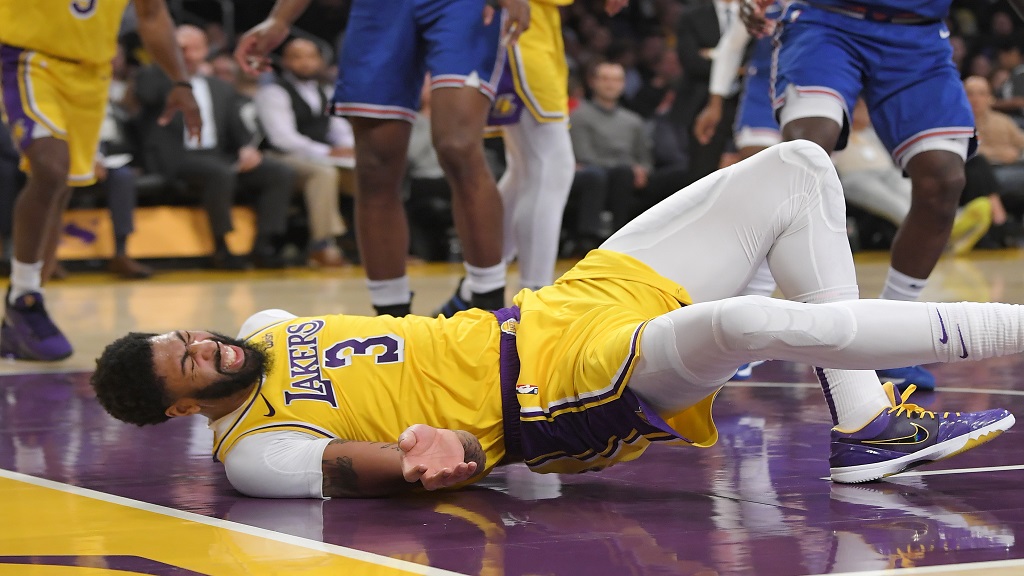 Los Angeles Lakers forward Anthony Davis winces as he hits the court after falling while trying to defend against a shot by New York Knicks forward Julius Randle during the second half of an NBA basketball game Tuesday, Jan. 7, 2020, in Los Angeles. Davis left the game. The Lakers won 117-87. (AP Photo/Mark J. Terrill).

Anthony Davis was hurt in a hard fall during the Los Angeles Lakers' win in the NBA on Tuesday, while Carmelo Anthony delivered a game-winner.

Davis fell awkwardly on his back during the third quarter of the Lakers' 117-87 thrashing of the New York Knicks.

The forward, who had five points, six rebounds and five assists, managed to walk to the locker room slowly after the fall and has reportedly been cleared of a serious injury.

LeBron James saw the Lakers to a sixth straight win thanks to 31 points, five rebounds and five assists.

Anthony hit a pull-up jump shot with 3.3 seconds remaining to see the Portland Trail Blazers past the Toronto Raptors 101-99.

He finished with a game-high 28 points on 10-of-17 shooting in a match-winning performance.

Andre Drummond's double-double of 23 points and 20 rebounds guided the Detroit Pistons to a 115-113 win over the Cleveland Cavaliers.

Chris Paul finished with 28 points as the Oklahoma City Thunder edged the Brooklyn Nets 111-103 after overtime.

Joe Harris managed nine points in the Nets' loss, but the guard struggled from the field. Harris went three-of-12 from the field and one-of-seven from three-point range.

The Milwaukee Bucks (32-6) will look to bounce back from their loss to the San Antonio Spurs when they visit the Golden State Warriors (9-29) on Wednesday.