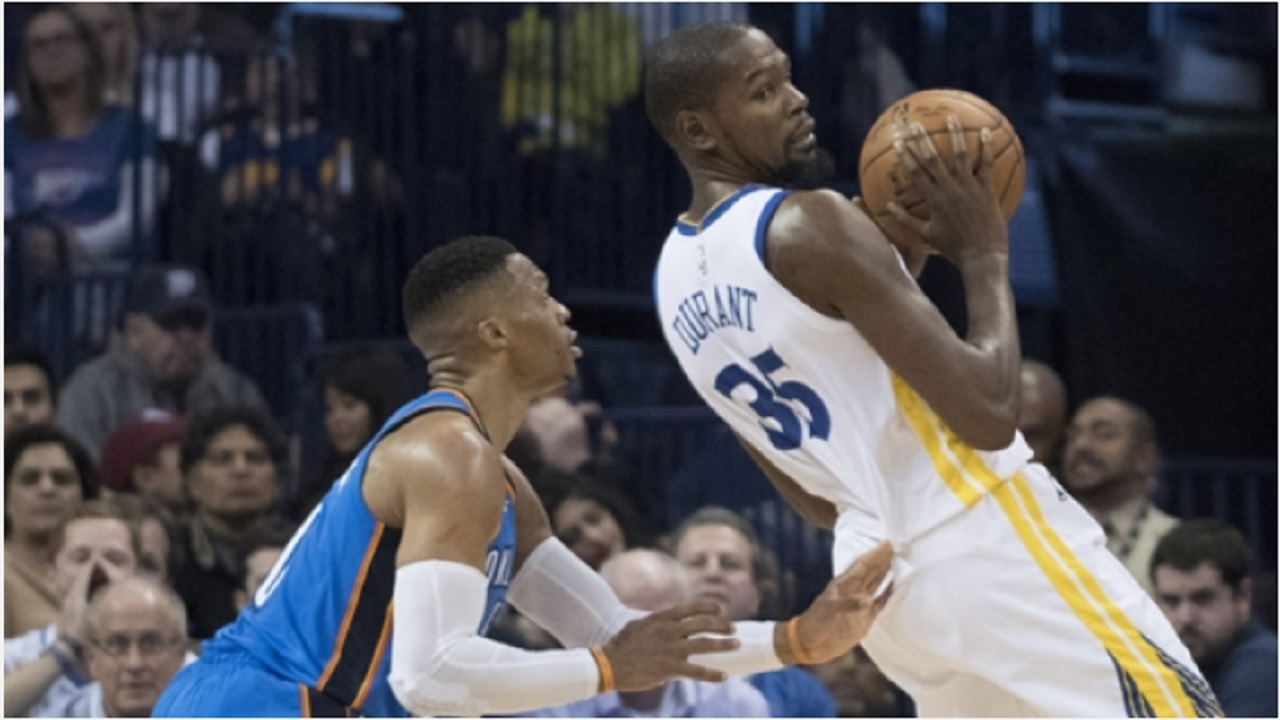 Kevin Durant's return to Oklahoma City ended in defeat as Russell Westbrook led the Thunder to a 108-91 victory over reigning NBA champions the Golden State Warriors.

MVP Westbrook had his way with the Warriors on Wednesday, scoring 34 points, 10 rebounds and nine assists and even enticed Durant to get chippy on the court which is exactly what his former team-mate wanted.

Durant – who recovered from an ankle injury to play – did have 21 points and five rebounds, but he was one of just three Warriors to score in double digits on the night. Oklahoma City had four of five starters score in double figures.

The Cleveland Cavaliers stayed hot as they downed the Brooklyn Nets 119-109 for their sixth successive victory.

LeBron James had 23 of his 33 points in the fourth quarter, including 18 straight for the Cavaliers, after he was accidentally headbutted by Brooklyn's Tyler Zeller in the third period, which required stitches above his lip.

As for the Boston Celtics, their winning streak was stopped at 16 after losing to the Miami Heat 104-98.

Los Angeles Clippers forward Blake Griffin tallied his first triple-double of the season with 26 points, 10 rebounds and 10 assists as his team snapped a nine-game losing streak with a 116-103 win over the Atlanta Hawks.

Dallas Mavericks forward Harrison Barnes scored 22 points and added nine rebounds, but his final shot was the one that made his night wonderful as he banked in a three-pointer with no time left on the clock in a 95-94 victory over the Memphis Grizzlies.

The Portland Trail Blazers shot badly in a 101-81 loss to the Philadelphia 76ers, but C.J. McCollum was particularly awful. He went one of 14 from the field scoring five points and adding five rebounds. He also went 0 for three from three-point range.

WINSLOW SPINS OUT OF SIGHT

It took a great night for the Heat to end Boston's run, but plays like this spinning layup from Justise Winslow helped Miami get it done.

The Heat just broke the Celtics' winning streak and they will be taking on a Timberwolves team that has won four of their last six and nine of 13. Heat center Hassan Whiteside is as good as it gets defensively for a big man in the NBA and he will match up with Timberwolves star Karl-Anthony Towns which presents a very interesting battle on Thursday.