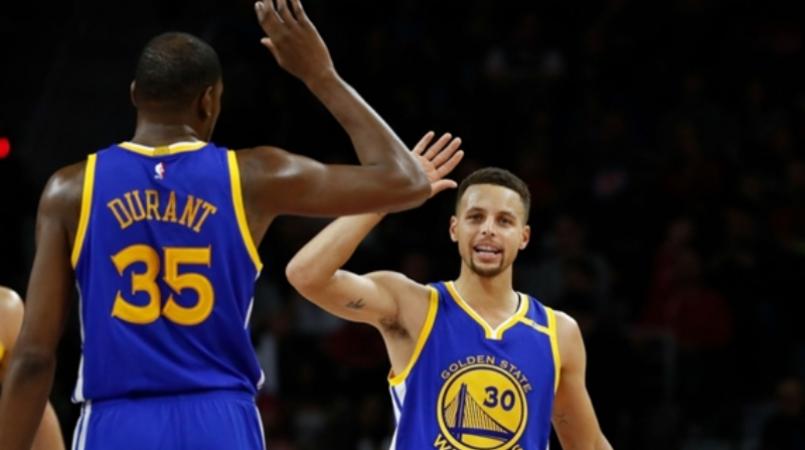 The Houston Rockets continued to fly high as the Oklahoma City Thunder crashed to defeat against the Orlando Magic, while reigning NBA champions the Golden State Warriors won in overtime.

For the Rockets, things have gone just as planned. With their 118-97 victory over the Indiana Pacers on Wednesday they have started the season 17-4 and went 12-1 in the month of November.

As for the Thunder, the season is not going so well. With their 121-108 loss to the Magic, Russell Westbrook's team has lost three in a row, five of their last six and now sit at 8-12 for the campaign.

Oklahoma City have not had a record that bad in their first 20 games since starting 7-13 in 2014.

The Thunder have had tremendous problems with sharing the ball this year as they had a mere 17 assists on 38 made field goals against the Magic. Even worse, they had just three assists in the entirety of the second half when they were outscored 62-51. They are tied for 21st in the NBA in assists per game with 21.

Meanwhile, the Rockets are playing their best basketball since February 2008. They went through the entire month of November with just one loss. That is their best month since Houston won 22-straight games with Yao Ming as the focal point of their offense.

As for the Warriors, they outlasted the Los Angeles Lakers 127-123 midweek.

Kevin Durant had 29 points, Stephen Curry scored 28 and Draymond Green finished with 15 points and 11 rebounds, while the Lakers were led by 32 points from Brandon Ingram.

Magic forward Aaron Gordon scored 40 points on 13-of-23 shooting with 15 rebounds, four assists and four steals in Orlando's win over the Thunder.

Spurs forward LaMarcus Aldridge scored a season-high 41 points on 17-of-24 shooting including a perfect three for three from three-point range in San Antonio's 104-95 victory against the Memphis Grizzlies.

Toronto Raptors point guard Kyle Lowry scored 36 points with six assists and five rebounds in a 126-113 win over the Charlotte Hornets. He also went eight of 11 from three-point range.

SIMMONS STRUGGLES FROM THE LINE

Even with Ben Simmons' 31-point, 18-rebound night in the Philadelphia 76ers' 118-113 win over the Washington Wizards, the guard left something to be desired with his free-throw shooting. He went 15 of 29 from the line and single-handedly let the Wizards back into the game as Washington employed the hack-a-shack game plan on Simmons.

Last season's number one pick attempted 24 free throws in the fourth quarter — an NBA record for a single quarter — and the Wizards cut the lead all the way down from 14 to three as the rookie went 12 of 24 from the line. He was still awesome overall, but that is something he will have to improve on moving forward.

Hornets center Dwight Howard not only shook his defender in the post, but he posturized another at the rim.