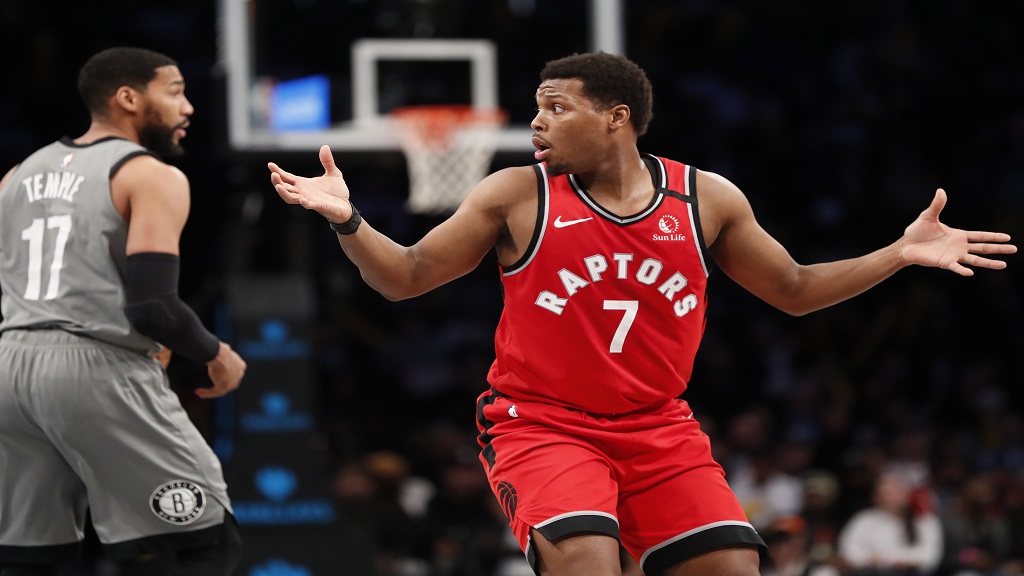 Toronto Raptors guard Kyle Lowry (7) reacts as he is called for a foul, his fourth, during the second half of an NBA basketball game against the Brooklyn Nets, Wednesday, Feb. 12, 2020, in New York. The Nets won 101-91. (AP Photo/Kathy Willens).

The Toronto Raptors and their 15-game winning streak was snapped by the Brooklyn Nets, while the NBA-leading Milwaukee Bucks lost without reigning MVP Giannis Antetokounmpo.

Toronto carried a franchise-record run into Wednesday's contest but the defending champions went down 101-91 at the Nets midweek.

It was the Raptors' first defeat since falling to the San Antonio Spurs on January 12.

Kyle Lowry's triple-double of 12 points, 12 assists and 11 rebounds were not enough for the Raptors, while Serge Ibaka top scored with 28 points on the road.

The Bucks, meanwhile, were beaten by the Indiana Pacers 118-111 in the absence of star Antetokounmpo.

Antetokounmpo missed his second successive game following the birth of his son and the Pacers took advantage, snapping a season-worst six-game losing streak.

Malcolm Brogdon posted 17 points and matched a career-high with 13 assists for the Pacers in Indianapolis, where T.J. Warren stole the show with 35 points.

Donte DiVincenzo was the pick of the Milwaukee players after scoring 19 points off the bench.

LeBron James and Anthony Davis put on a show. James posted a triple-double (32 points, 14 assists and 12 rebounds) and Davis registered 33 points and 10 assists as the Los Angeles Lakers outlasted the Denver Nuggets 120-116 in overtime. They became the first Lakers team-mates with at least 30 points and 10 rebounds in the same game since Kobe Bryant and Pau Gasol in 2008.

Luka Doncic was at it again, putting up 33 points and 12 rebounds to help the Dallas Mavericks beat the Sacramento Kings 130-111.

The streaking Utah Jazz defeated the Miami Heat 116-101 thanks to Donovan Mitchell's 26 points and a Rudy Gobert double-double of 16 points and 20 rebounds.

Carmelo Anthony has shown he is far from a spent force after being picked up by the Portland Trail Blazers in November. However, the 10-time All-Star had a rough night in the 111-104 loss to the Memphis Grizzlies. While collecting 15 rebounds, Anthony was just one of 15 from the floor for five points in 36 minutes. The veteran also missed all four of his three-point attempts.

The Cleveland Cavaliers topped fellow strugglers the Atlanta Hawks 127-105, but Cedi Osman had a game to forget. Osman made just one of 10 shots from the field, while he was one of seven from beyond the arc for three points.

The two final games before the All-Star Weekend take place on Thursday. The Los Angeles Clippers (37-17) travel to the Boston Celtics (37-16), with both teams coming off losses. The Oklahoma City Thunder and New Orleans Pelicans are also in action.