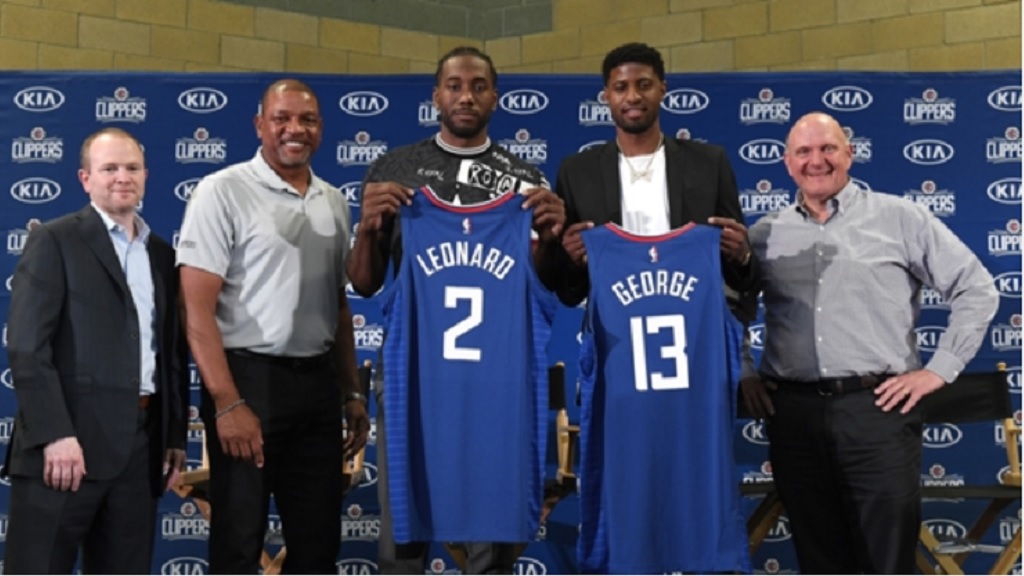 Kawhi Leonard (third from left) and Paul George (second from right) were introduced as members of the Clippers on Wednesday.

For the first time in six seasons, there may be a new winner of the Western Conference.

The Golden State Warriors, winners of the conference in each of the previous five campaigns, have lost Kevin Durant to the Brooklyn Nets and Klay Thompson to injury.

The Los Angeles Lakers added Anthony Davis but didn't improve nearly as much as the Los Angeles Clippers, a team that was better than them last season and have since added Kawhi Leonard and Paul George.

All we can do is guess who will win the conference this season and it could easily be an under-the-radar team like the Utah Jazz, who added Mike Conley and Bojan Bogdanovic.

Here's what we think you can expect this season.

Team on the rise: Dallas Mavericks

Dallas improved a lot last year with Luka Doncic coming into the fold and now they will have a healthy Kristaps Porzingis. We'll have to see how it works in the long run, but this team appears to clearly be trending upward.

This is obvious. Oklahoma City lost Russell Westbrook and George. A step back is inevitable. But this team has talent with Chris Paul, Shai Gilgeous-Alexander, Steven Adams, Danilo Gallinari, Dennis Schroder and Hamidou Diallo. We'll see how it works out and if the Thunder trade any of those guys to hasten their rebuild.

No Durant and no Thompson. That means a lot more shots for Stephen Curry. The big question is how he will fit with D'Angelo Russell, who is a lot more ball-dominant than Thompson. But if they can work well together, we could see the two-time MVP-level production from Curry again.

An obvious candidate. Williamson has already won the Rookie of the Year Award if he can get through the season healthy - and there are doubts about that given he will miss the start of the season due to knee surgery. Williamson will be on a team without a ton of talent and on highlights every single night. That's a great recipe to win Rookie of the Year.

Jokic has averaged 18.0 points, 10.0 rebounds and 6.0 assists each of the last two years. Only Westbrook and Oscar Robertson have done that over a three-year span.

The Nuggets might not have added as much as some of the other teams in the West (see the Houston Rockets, Clippers, Lakers), but one more year of development of Jokic and Jamal Murray, plus a healthy Michael Porter Jr, should keep this team in contention for a playoff spot.

1. The Rockets duo: Will Westbrook and James Harden be able to mesh together in an offense? And how will Westbrook's shooting struggles fit with Mike D'Antoni?

2. Clutch performers: Will Davis and LeBron James dominate the league like we think they can or will the duo once again struggle to stay healthy?

3. A pair reigns supreme: Is it Harden and Westbrook? James and Davis? Leonard and George? Donovan Mitchell and Conley? Doncic and Porzingis?

The new season of the NBA starts on Tuesday, October 22.

NBA preview: How Westbrook and Harden evolved since Thunder days