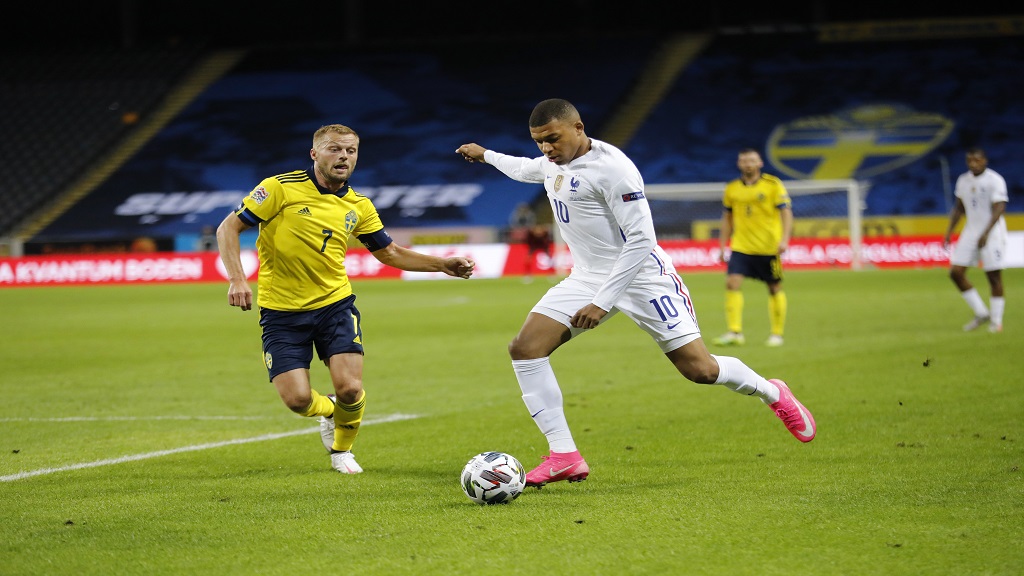 Kylian Mbappé scored the winning goal as France earned a scrappy 1-0 win at Sweden in the Nations League on Saturday.

The Paris Saint-Germain striker's 14th international goal came in the 41st minute but it could have been more comfortable for France, only for Antoine Griezmann to fluff a penalty right at the end.

Mbappé cut in from the left and, after initially being tackled, he got the ball back off Kristoffer Olsson, feinted, and then curled the ball inside the post.

“It was a tough match and we fought hard. It wasn't easy ... it could be better in the future," Mbappé said. "The most important thing is the result."

It was an accomplished finish from Mbappé, following his glaring missed chance in the 1-0 defeat to Bayern Munich in the Champions League final on Aug. 23.

France coach Didier Deschamps handed a debut to 21-year-old Leipzig center half Dayot Upamecano and recalled Adrien Rabiot to midfield, after a long spell out of the side following his refusal to be on the reserve list for the 2018 World Cup.

Chances were scarce in the first half but veteran Sweden striker Marcus Berg almost broke through late on, only for France goalkeeper Hugo Lloris to deny him by rushing off his line. Moments later, Sweden 'keeper Robin Olsen was picking the ball out of the net.

“It was difficult for us, but for them as well,” Deschamps said. “We could have done a bit better going forward.”

Still, France were in control of the second half, with Mbappé and Barcelona's Griezmann wasting good chances before Lloris punched away a late effort from the lively Emil Forsberg.

Griezmann then blazed a poor penalty over the bar after substitute Anthony Martial was fouled.

France host Croatia at Stade de France on Tuesday in a repeat of the World Cup final two years ago, which France won 4-2 with Mbappé among the scorers.

In the group's other game, Croatia lost 4-1 at defending Nations League champion Portugal.

Mbappe to stay at PSG next season 'no matter what'