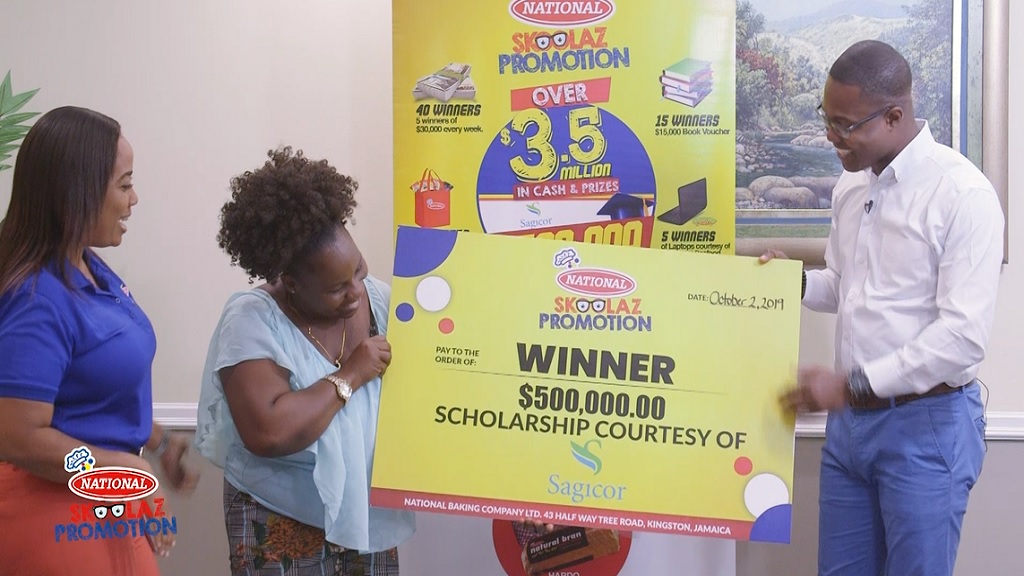 What would you do if you won $500,000 towards your child’s tertiary education? For Doris Johnson, the grand prize winner in the National Skoolaz Promotion, it is exactly the sum of money she needed to complete paying for her daughter’s final year of Law School.

For the last eight weeks, the National Baking Company has been awarding weekly prizes to lucky entrants in the skoolaz promotion to help with the offsetting of back to school expenses. The grand prize for the promotion was a $500,000 tertiary scholarship awarded by the Sagicor Group.

Speaking on their involvement in the campaign, Marketing Manager for Sagicor Life Terron Dewar revealed: “Sagicor Life decided to partner with National because this is an excellent initiative aimed at financing the cost of tertiary education for Jamaica’s children [and] we are committed to improving the lives of Jamaica’s children.”

When asked why she entered the promotion, Doris Johnson said her daughter saw the advertising on social media and was immediately attracted to the grand prize. In Week 5 of the campaign she won one year’s supply of National products but was determined to re-enter for a chance to win the grand prize. With the $500,000 prize she says she will now be able to comfortably finance the end of her daughter’s Law School tenure.

The eight-week long National Skoolaz promotion, which started on August 2, rewarded over 85 winners with cash and prizes totaling $3.5 million. Click the video below to find see the grand prize handover.

JWN Foundation looks to award scholarships at a national level