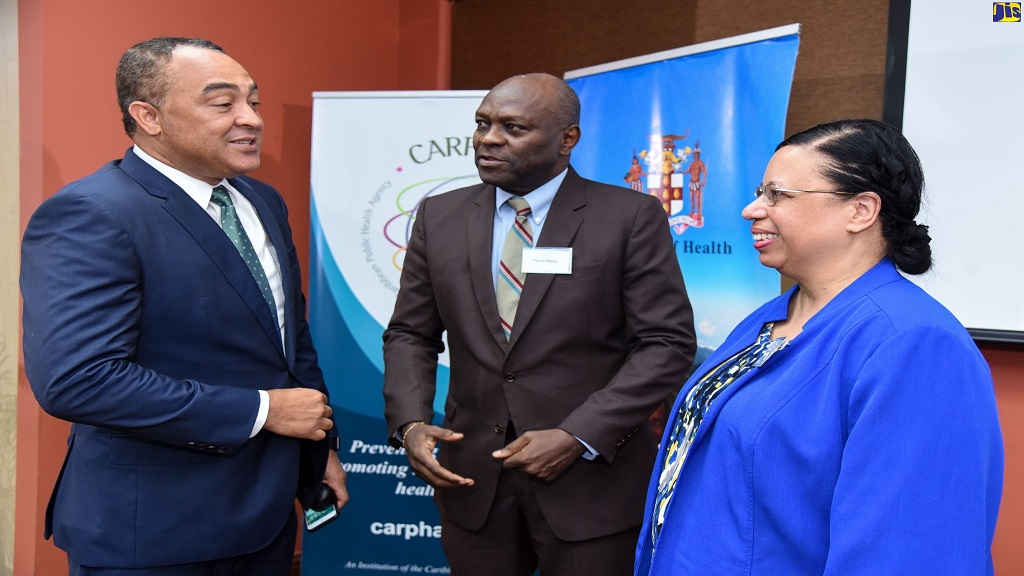 Minister of Health and Wellness, Dr Christopher Tufton (left), in discussion with the Pan American Health Organisation (PAHO)/World Health Organisation (WHO) representative in Jamaica, Dr Bernadette Theodore-Gandhi, at the opening of a two-day Regional Meeting on ‘Reduction of Salt for Prevention and Control of Non-Communicable Diseases (NCDs) on Tuesday at the University of the West Indies in St Andrew. The meeting was organised by the Caribbean Institute for Health Research (CAIHR).

Health and Wellness Minister, Dr Christopher Tufton, says that as part of continuous measures to combat non-communicable diseases (NCDs), the ministry will be implementing a National Salt Reduction Programme.

Speaking at the opening of a two-day Regional Meeting on ‘Reduction of Salt for Prevention and Control of NCDs’ at the University of the West Indies, Mona Campus in St Andrew on Tuesday, Tufton said the programme, which aims to “reduce blood pressure and associated cardiovascular diseases”, carries a $23 million budget.

The minister said the project will run for 18 months in partnership with the Caribbean Institute for Health Research (CAIHR), which organised the meeting.

“The project is to capture baseline data on salt consumption, as well as salt content in packages and restaurant foods,” Tufton said.

He stated that the 2018 Investment Case for NCDs in Jamaica predicts that the economy stands to gain more than $77 billion over a 15-year period “from investing in a package of interventions for tobacco, alcohol, diabetes and cardiovascular diseases”.

In noting that the region has a blood pressure problem, the minister said statistics show that many of the territories have similar issues with NCDs, and that countries must work together to tackle the problem.

He said that across the Caribbean, persons are exceeding the World Health Organisation (WHO) recommendation of daily intake of salt, which is less than 2,000 milligrams, with the consequence that “we are killing ourselves at an increasingly rapid rate”.

The high-level meeting is intended to review actions to reduce salt and sodium in the food environment, and to facilitate the exchange of ideas and experiences among stakeholders.