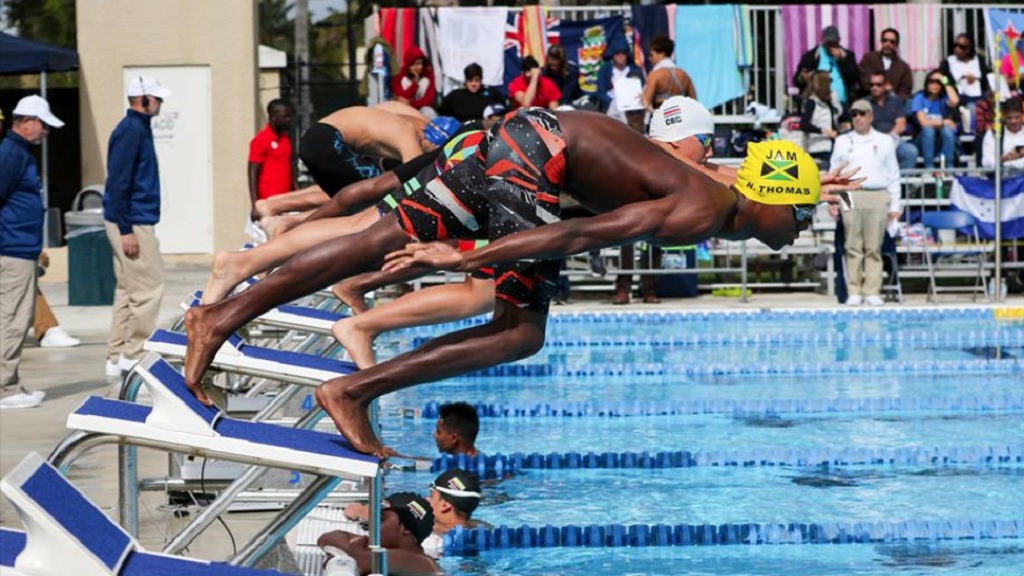 Campion College's Nathaniel Thomas in action at the 2019 ISSA High Schools and Tertiary Institutions meet at the National Aquatic Centre on Friday, November 29, 2019.

Campion College’s Nathaniel Thomas highlighted a record filled day at the 2019 edition of the ISSA High Schools and Tertiary Institutions meet on Friday at the National Aquatic Centre at Independence Park.

Immaculate Conception retained their title in the girls' section with 631 points, while the boys' title was won by Wolmer’s with 465.5 points.

Thomas, competing in the 15-16 age group, set a new 13-14 national record in the 50-metre butterfly by stopping the clock in 26.04, the fastest Jamaican of all time in that age category.

The previous 13-14 national record was 26.22,  set by another Campion College past student, Olympian Timothy Wynter when he won bronze at the 2011 CCCAN championships.

He started the competition with a record in the Boys' 15-16  50-metre backstroke winning in 27.76 almost two seconds faster than the old record of 29.67. Thomas is the reigning CARIFTA and CCCAN champion in the event.

Thomas gave his thoughts on his performances at the meet

"I think I can drop more time at the Christmas Open and I think I can do 25, but for my other races I was  not really focusing on that. My main goal was to drop time in the 50 butterfly and 50 backstroke. I did not do as well in the 50-metre backstroke but it is okay as it was still a good performance”.

Another swimmer in record breaking form was Nelson Denny of Hillel in the 12 and under division. He swam five races and took gold in four on his way to four new meet records.

Denny placed fourth in the open 200m freestyle event in a new personal best time of 2:11.05. Only in the 100m freestyle did he not swim a new personal record. The freestyle and butterfly records were set by former World Championships representative and Kingston College past student Brad Hamilton.

Wolmerians Britney Williams 17 and over, Kyle Sinclair and Kaheem Lozer accounted for seven of the meet records to fall on the day

Paris Clare of St Andrew High School also got her name in the record books when she bettered Stefani Webley’s 31.37 to win a time of 30.96.

The relay records fell to Immaculate in the 13-14 and 17 and over girls' 200 medley races. The younger age group had the team of Saifya Officer, Kokolo  Foster, Alvaranga and Ireland Hunter erasing the record of 2:13.52 to touch in at 2:11.52. The senior team of Zadia Davis, Karci Gibson, Sage Sinclair and Chenille Haughton bettered the old mark of 2:21.38 to set a new standard of 2:21.18.

Teammate Mia Cunningham took the bronze medal in the 11-12 50m breaststroke in 41.61.  For the boys, Benjamin Davis of Cornwall College finished third in the 100m freestyle in the 12 and under division in 1:07.46.