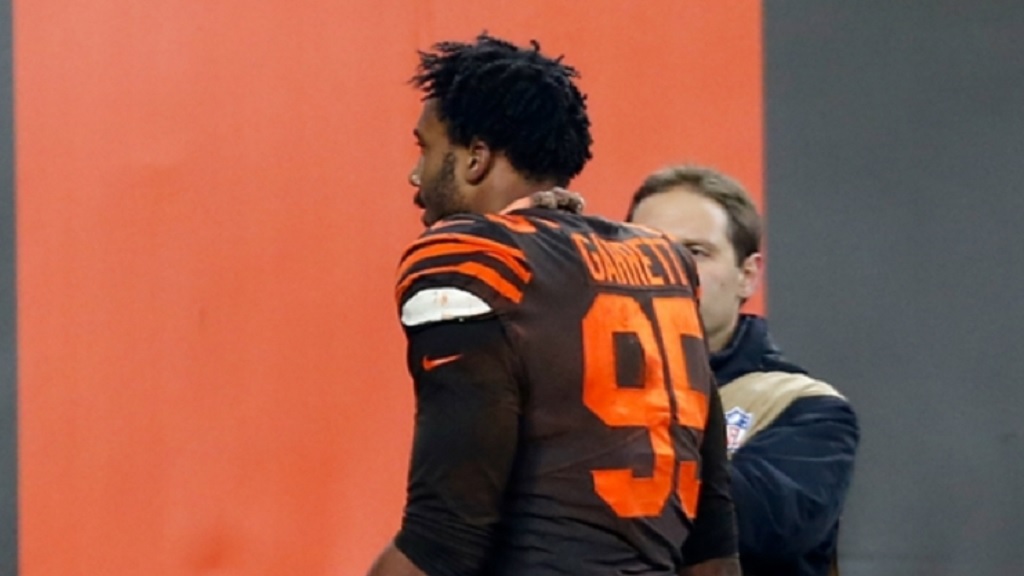 Myles Garrett's season is over.

Myles Garrett has been suspended indefinitely without pay by the NFL following his involvement in an incident with Pittsburgh Steelers quarterback Mason Rudolph.

The Cleveland Browns defensive end ripped off Rudolph's helmet before swinging and hitting the 24-year-old during the closing stages of his team's 21-7 victory over Pittsburgh on Thursday.

Steelers center Maurkice Pouncey responded by aiming kicks and punches at Garrett, who told reporters after the game he had "made a mistake" and would "regret" what unfolded.

The NFL reacted inside 24 hours to the ugly scenes in the televised game, including fining both franchises $250,000.

Garrett has been banned for the remainder of the season – including the playoffs, should the Browns make the postseason - and the NFL announced it has also fined him an "additional amount".

The league also stated that Garrett, the first overall pick in the 2017 draft, must "meet with the commissioner's office" before a decision is made over when he can return to action.

Pouncey has been suspended without pay for three games and fined for fighting, while Cleveland's Larry Ogunjobi will sit out one game for unnecessary roughness.

The suspended players can appeal within three days, while the NFL may also take action against others who were involved in the fracas during the final seconds of the fourth quarter.

"Additional discipline for other players will be forthcoming through the standard accountability process, including those players who left the bench to enter the fight area," the NFL said.

The Browns responded to the NFL's announcement with a statement from owners Dee and Jimmy Haslam, in which they apologised to Rudolph and the Steelers while describing Garrett's actions as "completely unacceptable".

Cleveland's statement read: "We are extremely disappointed in what transpired last evening at the end of our game. There is no place for that in football and that is not reflective of the core values we strive for as an organisation.

"We sincerely apologise to Mason Rudolph and the Pittsburgh Steelers. Myles Garrett has been a good team-mate and member of our organisation and community for the last three years, but his actions last night were completely unacceptable.

"We understand the consequences from the league for his actions."

Victory over their AFC North rivals lifted Cleveland to 4-6 for the season. They host the Miami Dolphins in Week 12 before travelling to again tackle Pittsburgh (5-5) on December 1.

The Patriots and Eagles will square off in Super Bowl 52