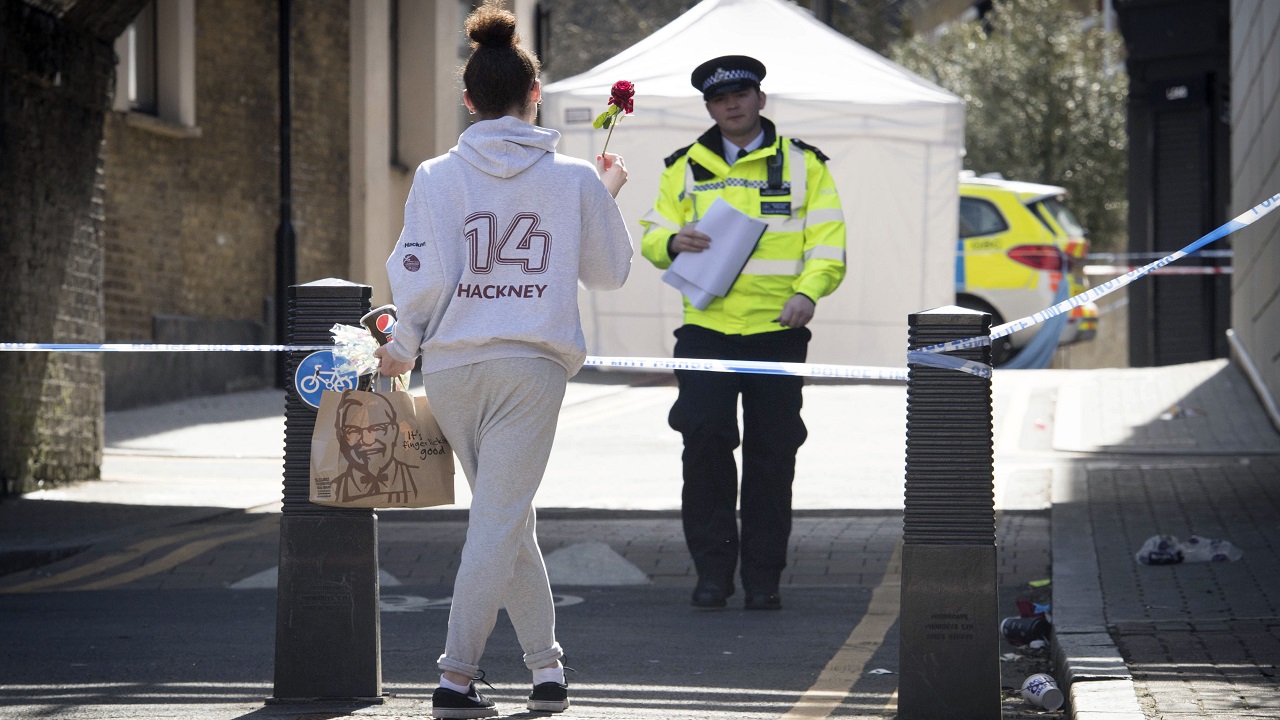 Friends say Israel Ogunsola was a bubbly young man with a knack for making people laugh.

This week the 18-year-old was stabbed to death, becoming London's 53rd murder victim of 2018. The British capital is being shaken by a spike in deadly violence, much of it involving young people with knives caught up in gang feuds. The causes are disputed and so are the solutions. But the pain is raw.

"I'm still in disbelief, because I don't understand why," said 19-year-old Nella Panda, standing beside a police cordon in the east London borough of Hackney, steps from where Ogunsola collapsed on Wednesday evening. Police and an off-duty paramedic battled to save him, but he was pronounced dead 25 minutes later.

Ogunsola was the 12th teenager to die violently in London since January. Many of those arrested for the killings are also in their teens and 20s. Most of the city's murder victims were stabbed to death. Guns are tightly restricted in Britain and shootings are relatively rare.

If the bloody trend continues, London will far surpass the 130 murders in 2017 and reach a number not seen since the early 2000s.

In February and March, London hit the unwanted milestone of recording more homicides than New York. The cities are roughly the same size, with more than 8 million people, and have similar extremes of poverty and wealth, but London has never recorded more murders in a year than the US metropolis. New York had 290 homicides in 2017, the lowest number in decades.

Police and community workers say London's surge in violence is partly driven by battles over control of the illegal drug trade and a "postcode war" between street gangs. Some victims were targeted, while others may have been in the wrong place at the wrong time - such as 17-year-old Tanesha Melbourne, killed in a drive-by shooting on Monday as she hung out with friends.

As well as multiple causes, there are multiple candidates to blame for the city's rising homicide rate.

Some have criticised London Mayor Sadiq Khan, who oversees London's Metropolitan Police. But most of the police budget comes from the British government, which has cut funding to police forces by more than 20 percent since 2010.

Khan said on Thursday that rising crime is a national problem and "I can't solve it by myself". "Since I first became mayor, I have been saying to the government that it's not sustainable to make the level of cuts they have been making to London," he said.

The deficit-cutting Conservative government has also slashed funding to local councils, which run many social services, leading to the closure of youth clubs, libraries and programs for young people.

Money is not the only concern. Some argue that crime-fighting has been hampered by curbs to police stop-and-search powers - a decision made by then-Home Secretary Theresa May, who is now prime minister.

"Drugs are prolific," Lammy told the BBC. "It's like (food-delivery service) Deliveroo. They're as prolific as ordering a pizza. You can get them on Snapchat, WhatsApp. That in the end is driving the turf war and it's driving the culture of violence."

US Gov't: Goodyear tyres may have caused 95 deaths or injuries