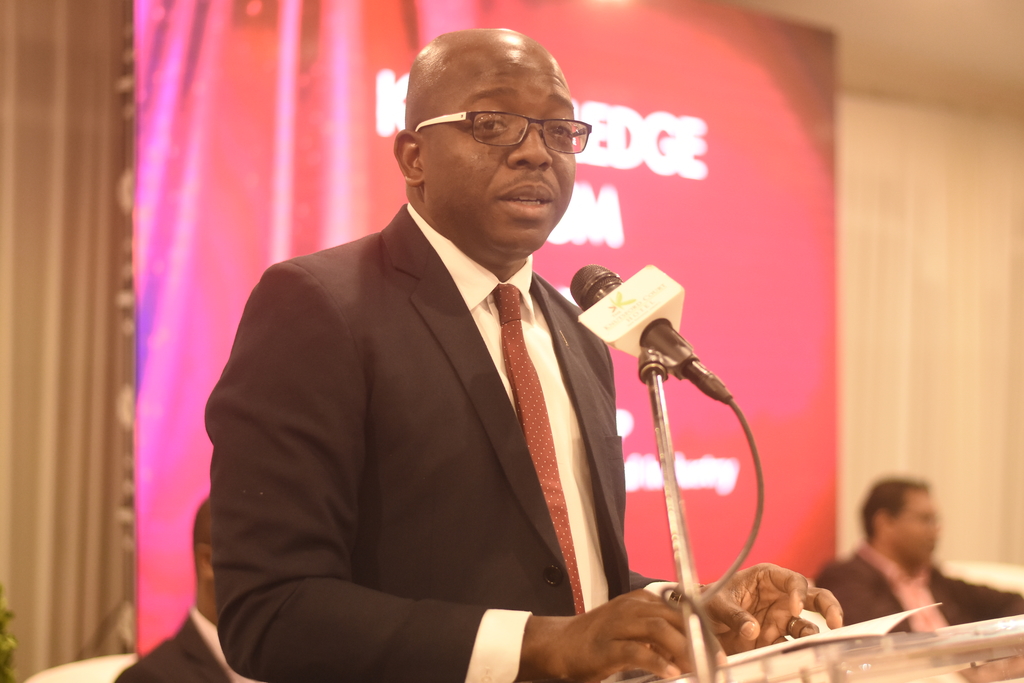 Minister without Portfolio in the Ministry of Economic Growth and Job Creation, Senator Pearnel Charles Jnr.

As Jamaicans continue to grapple with another dry season and fears of dwindling water supplies, Minister without Portfolio in the Ministry of Economic Growth and Job Creation, Senator Pearnel Charles Jnr. is announcing a raft of multi-million dollar projects to bolster Jamaica’s water sustainability efforts.

Beginning with a US$42.5 million dollar five-year programme that will target the Kingston and St. Andrew Area (KSA), the administration plans to plug existing gaps and convert more users of water to paying customers.

Charles, who has portfolio responsibility for water, infrastructure and housing, was speaking at Red Stripe’s ‘Every Drop’ water stewardship forum last week. He emphasised the need to regularise users of water in the KSA which is the main contributor to Jamaica’s high non-revenue generating water usage rate – standing at 70 per cent.

“An integral part of growing the NWC’s customer base will be converting consumers of water into NWC customers. Through the use of geo-referencing of services and GIS technology, the NWC will be better able to identify illegal connections and will continue to take the relevant steps to ensure that once the customers are identified they are accounted for on its billing system,” said Charles.

“The recent increased budgetary allocation of $795 million to the Rural Water Supply Limited confirms that this government is serious about meeting the needs of our people. This increased allocation will see an increase in the number of projects undertaken in rural areas, at the school level and the community level.”

According to the minister, the work of the Rural Water Supply Limited is important to ensure that no one is left behind when it comes to access. He pointed to a recent legacy project executed by the Ministry and its agencies to rehabilitate an outdated National Water Commission water supply system in the community of Font Hill, in St. Thomas.

“Through this initiative, the Font Hill Primary School was reconnected with a constant supply of potable water,” he said.

Red Stripe's forum was part of a targeted effort to support the development of a more robust and sustainable water sector, thereby ensuring the continued growth of the Jamaican economy.

Red Stripe managing director Ricardo Nuncio revealed that although Jamaica was not considered a “water-stressed country”, the company acknowledged weaknesses in stewardship that result in shortages.

He revealed that the beer company had taken massive steps towards making its operations more efficient when it comes to water usage.

“Thanks to our investment in state of the art magnetic flow water meters and a 4,300 M3/day Waste Water Treatment Plant, we have managed to achieve higher levels of efficiency,” he shared.

Minister Charles commended Red Stripe for placing the spotlight on the world’s most critical resource. “Every Drop Counts is a global call that appeals to every citizen to conserve water.

This call, which has been adopted by the National Water Commission, is not only appropriate but is applicable to the management and sustainability of Jamaica’s water resources. Red Stripe’s utilisation of this slogan speaks volumes to their involvement in water conservation.”

Deputy President of the Jamaica Manufacturers and Exporters Association Richard Pandohie endorsed the minister’s comments and added his voice to the call for more focus on sustainability.

“Water is at the core of sustainable development, for a healthy ecosystem and economic survival. It is an irreplaceable resource that is only renewable when managed efficiently,” said Pandohie. Calling the forum timely, the JMEA deputy president hailed Red Stripe for bringing the country’s greatest minds together to chart a way forward. “This makes us appreciate that good water stewardship or lack thereof represents a tangible business risk to the public and private sector.”

NWC to spend $4.5b to stem non-revenue water in Portmore, north coast