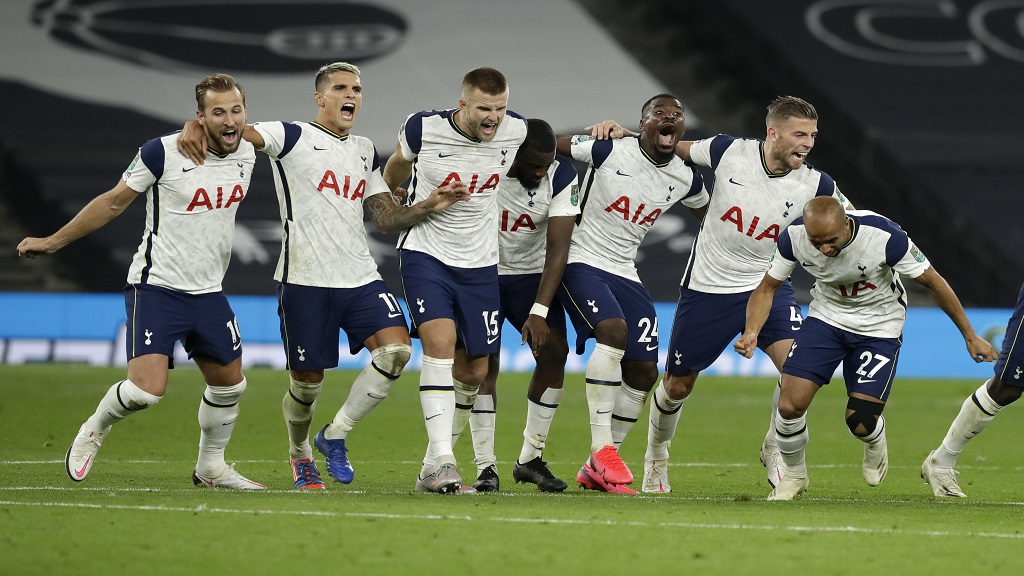 Jose Mourinho had just completed his third and final Tottenham substitution when Eric Dier sprinted off the field past him.

With Tottenham losing 1-0 to Chelsea on Tuesday, the manager chased after his midfielder into the dressing room.

“He wasn’t happy,” Dier said, "but there was nothing I could do about it, nature was calling.”

Tottenham were a goal down, a man down, and without their manager.

“I was just pushing him,” Mourinho said, “to come back as soon as possible.”

Dier was soon back on the pitch to help Mourinho see off his former side and reach the quarterfinals of the League Cup in his first full season with Tottenham.

First Erik Lamela had to equalise in the 83rd minute, canceling out Timo Werner's first-half goal. Then, once the game went straight to penalties after 90 minutes, Tottenham scored all five spotkicks before Mason Mount hit the edge of the post with Chelsea's fifth.

Tottenham, which had a bye into the fourth round due to coronavirus cases at Leyton Orient, advanced 5-4 in the shootout to put Mourinho two wins from a first final with Tottenham.

Dier was named man of the match, and the award was proudly placed on the toilet for a social media photo. The last time Tottenham contested a penalty shootout — losing in the FA Cup to Norwich in March before the coronavirus shutdown last season — Dier ended up charging into the stands to confront a fan and being banned for four matches.

Tuesday's unexpected exit from the pitch had a better ending.

“After playing on Sunday and tonight it wasn’t easy,” Dier said.

The League Cup was the first trophy Mourinho collected as Chelsea manager in 2004 before sweeping back-to-back Premier League titles in that first spell in charge. Now Frank Lampard, who was so instrumental to Mourinho's success at Chelsea, is leading the west London club.

And the pair became involved in a brief heated exchange in the first half of a London derby that lacked some of the unusual intensity with fans locked out of the stadium due to the pandemic,

Lampard had asked why Mourinho spends more time speaking to the referee than his own players.

“I think he was feeling the sense of the first half and how it was,” Lampard said.

It was a first half when Tottenham played without a recognizable striker in the lineup as Mourinho copes with the demands of this being his team's third game in five days — with another to come on Thursday.

With nine changes from the side that was held by Newcastle on Sunday, Tottenham were completely overwhelmed by an expansively reshaped Chelsea side.

It was one of Tottenham's new signings at fault for the opener on his debut. Left back Sergio Reguilón gave the ball and Werner had the space to strike past goalkeeper Hugo Lloris in the 19th minute for his first goal since joining from Leipzig for around $60 million.

But Reguilón, who was signed from Real Madrid, showed his attacking prowess down the left flank in a second half. Tottenham were transformed, showing the threat missing before the break, with Harry Kane, Lucas Moura and Pierre-Emile Højbjerg having to be deployed.

Shortly after Dier's toilet pit stop, Reguilón made amends for his first-half mix-up. The Spaniard chipped the ball over for Erik Lamela, who got ahead of Emerson Palmieri to net the equaliser in the 83rd minute past goalkeeper Edouard Mendy.

Then, on his Chelsea debut, Mendy didn't get close to making a single save in a penalty shootout lacking the usual pressure coming from the stands with the stadium largely empty.

Going out of the League Cup was the latest setback for Lampard, whose side has only four points from their opening three Premier League games.

“You sleep for one minute and don’t recover and defend a zone where players score goals then you are going to concede," Lampard said. “Players have to get better at that.”

Tottenham, which haven't won a trophy since last picking up the League Cup in 2008, returns to action in their stadium on Thursday to play Maccabi Haifa in the Europa League qualifying playoffs and then play at Manchester United on Sunday.

“The football authorities, with so many rules which are in place, should be forbidding a player to play two matches in 48 hours,” Mourinho said.