VIDEO: Mourinho felt he had 'no bench' as Spurs draw with Man Utd 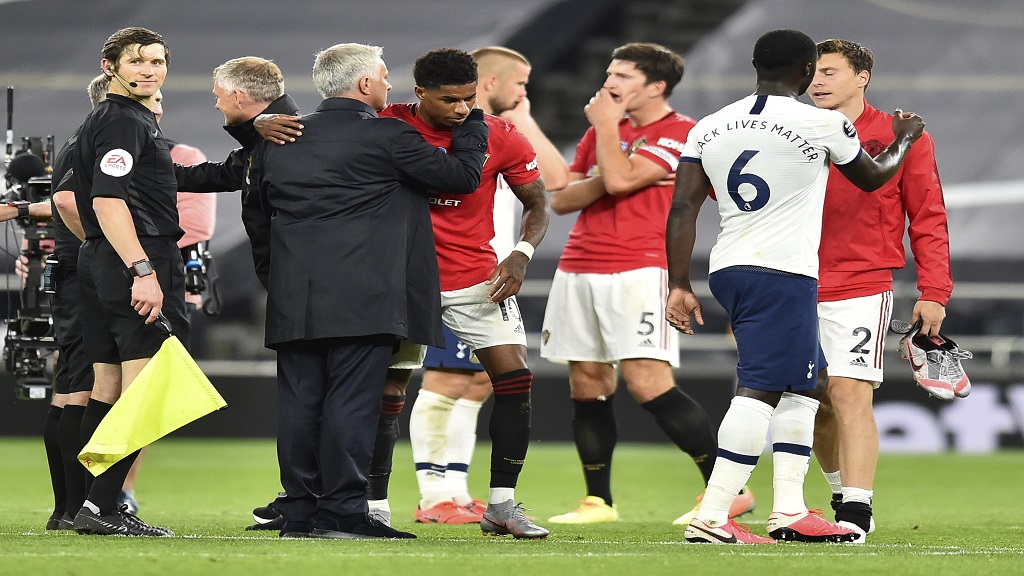 Jose Mourinho felt he had "no bench to react" during Tottenham's 1-1 English Premier League draw with Manchester United on Friday.

Bruno Fernandes' 81st-minute penalty cancelled out Steven Bergwijn's goal as Spurs and United returned to action amid the coronavirus pandemic.

United were also awarded an even later penalty, but a VAR check reversed the on-field call.

But Mourinho rued a lack of options off the bench, with the absences of Dele Alli and Lucas Moura hurting Spurs' depth in attack.

"I liked the team attitude, the team organisation, the control, the following of a plan, being very solid, giving to United what they don't like, really happy with that," the Spurs head coach told Sky Sports.

"I'm unhappy with the fact that the way I was reading the game, I had no bench to react to it.

"With Lucas and Dele Alli, they would be on the bench or playing, then I would have had on the bench some of our attacking players because they become more dominant because we tired upfront. By being tired we couldn't press, making it easier for them to build.

"At the same time, we couldn't be dangerous on the counter-attack because we had no legs for that. It was hard for us to manage the game in that sense.

"With the second penalty, I'm unhappy with Moss because he didn't give the free-kick on Serge Aurier, again giving a cheap penalty, a non-penalty. In this case, the VAR gave the truth over what happened in the box."

While Mourinho lamented his lack of options, United introduced Paul Pogba, who was fouled for the penalty converted by Fernandes, Mason Greenwood, and Odion Ighalo off the bench.

"United had it, Spurs did not. It was not just Pogba. They had Paul, they had Greenwood, they had Ighalo," Mourinho said.

"If they wanted to decide, they could have had Jesse [Lingard], who can change the face of the game, or one in short spaces who can find something really good.

"That's what five changes can [do] with a powerful bench with options."

Ahead of facing West Ham on Tuesday, Spurs are eighth in the table – four points behind fifth-placed Manchester United.