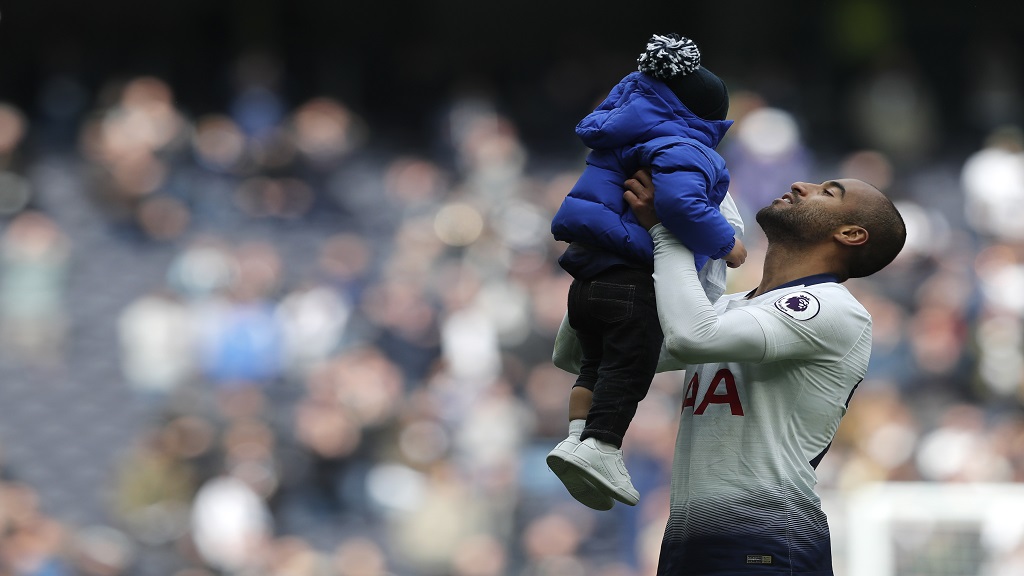 Tottenham's Lucas Moura celebrates with his son at the end of the English Premier League football match against Huddersfield Town at Tottenham Hotspur stadium in London, Saturday, April 13, 2019.

Lucas Moura scored a hat trick as Tottenham stayed on course for a top-four finish in the Premier League by beating Huddersfield 4-0 on Saturday.

Moura helped Spurs overcome the absence of injured striker Harry Kane by becoming the first player with a hat trick in the club's new stadium after Victor Wanyama opened the scoring in the 24th minute.

The win lifts Tottenham one point above Chelsea into third place with five games remaining. Chelsea will face first-place Liverpool on Sunday.

Moura and Wanyama were among seven changes made by manager Mauricio Pochettino from Tuesday's 1-0 win over Manchester City in the first leg of Spurs' Champions League quarterfinal — a game in which Kane suffered a left ankle injury that could rule him out for the rest of the season.

But Tottenham were in control from the start. They took the lead when Wanyama ran onto a ball that striker Fernando Llorente couldn't control then coolly rounded the goalkeeper to slot home.

While Llorente was ineffective as Kane's replacement, Moura showed he can shoulder some of the scoring burdens. He doubled Tottenham's lead when he latched onto a through ball from Moussa Sissoko and arrowed a shot into the bottom left-hand corner.

After Huddersfield missed a couple of good second-half chances to get back in the game, Moura wrapped up the points for Tottenham in the 87th when he controlled a pinpoint cross from Christian Eriksen with one foot before using the other to fire past Ben Hamer.

He still had time to complete the hat trick as he lashed a shot from a tight angle into the top corner in injury time.

Moura celebrated after the final whistle by bringing his 1-year-old son onto the field, with the crowd cheering every time the toddler kicked the ball toward his father.