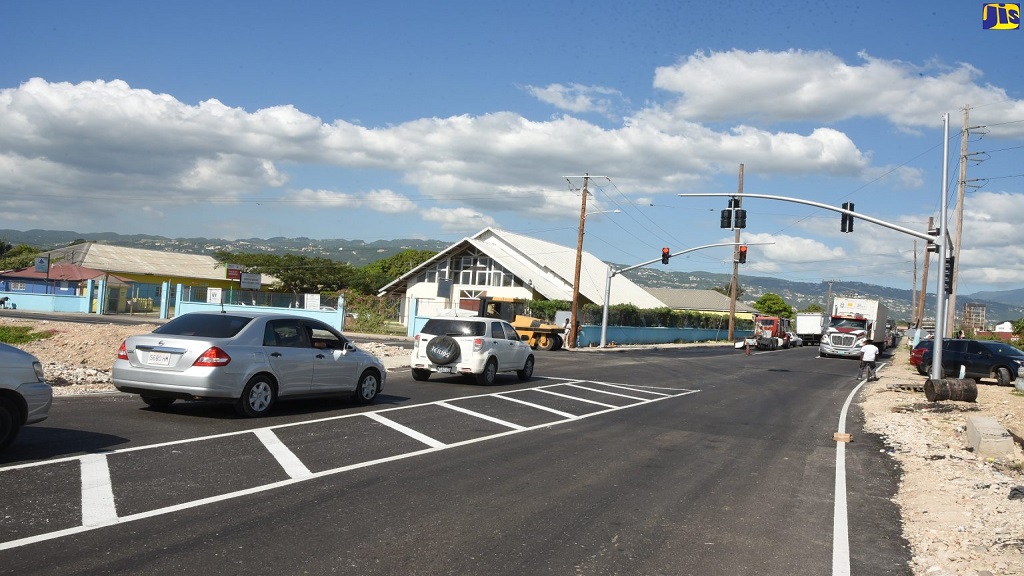 Motorists at one of the signalised points along the new Three Miles bypass road in St Andrew.

Motorists in the Corporate Area are welcoming the opening of the new Chesterfield Drive extension road in St Andrew, which bypasses the busy Three Miles roundabout.

Major road works by China Harbour Engineering Company (CHEC) are ongoing at the roundabout, and traffic has been excluded from the area.

The motorists have indicated that the new roadway has made a significant difference to the flow of traffic in the area.

The road was commissioned into service on December 2.

The new roadway is part of the Government’s overall road development and traffic management programme linking Chesterfield Drive off Spanish Town Road to Marcus Garvey Drive in the vicinity of the Tinson Pen Aerodrome.

A motorist who lives in the area told JIS News that the roadway has made her journey easier.

“This makes a world a difference right now because normally I would have to go across Portmore and come back around,” she noted.

Another driver said: “It is the first I am taking the route, but everything’s alright so far and it’s quicker and more convenient.”

“It’s a quicker way to get through and… I really feel like it’s for the good,” said another motorist.

Senior Communications Officer at the National Works Agency (NWA), Ramona Lawson told JIS News that the project was undertaken out of the need to redistribute traffic from the Three Miles area in order to facilitate ongoing bridge construction work there.

“It has taken off a tremendous amount of traffic from the Waltham Park and the Olympic Way areas… so it’s having an all-round (positive) effect on motorists who are originating west of Six Miles and going to various locations in and around the city,” she noted.

The road accommodates two-way traffic and has been signalised at two new locations – Pacific Boulevard and Marcus Garvey Drive – to effectively manage the increase in traffic.

The thoroughfare is also marked to guide the transition from Spanish Town Road and Marcus Garvey Drive, and is outfitted with the requisite road and safety signs.

“Pay keen attention to the road markings… The very good road surface is not an invitation to speed or to overtake,” Lawson warned.

She further appealed to motorists to obey the roadway’s posted speed limit of 50 kilometres per hour, and to use the bailey bridges, located close to the Marcus Garvey access, as intended.

The US$1-million Chesterfield Drive extension road project was funded under the Major Infrastructure Development Programme (MIDP). It involved the construction of a 1.5-kilometre corridor between Chesterfield Drive and Marcus Garvey Drive, as well as drainage improvement works and the rehabilitation of a 700-metre section of Chesterfield Drive to include the installation of 1.5-metre-wide sidewalks.