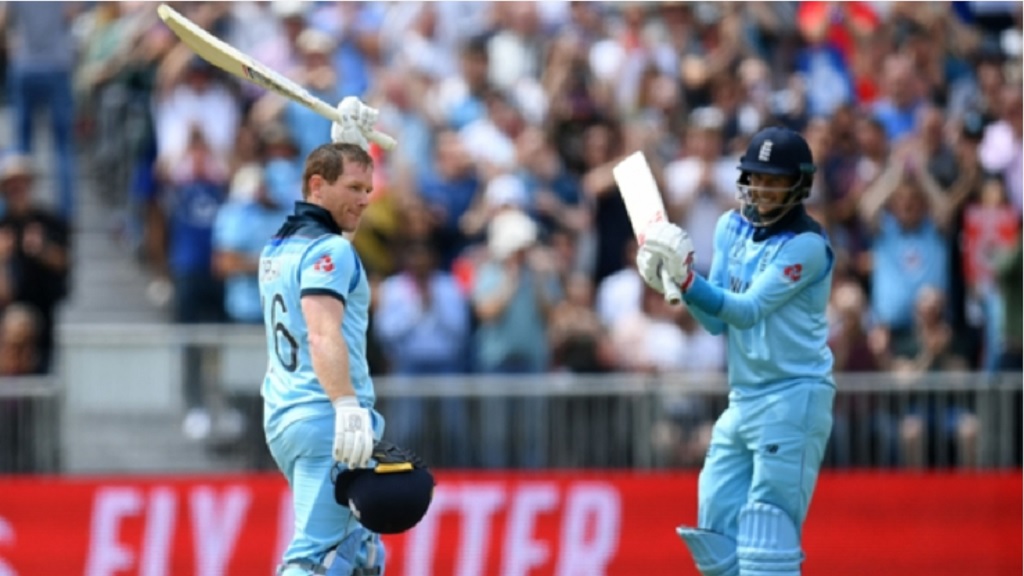 Records tumbled at Old Trafford on Tuesday as a sensational 148 from Eoin Morgan helped England thrash Afghanistan by 150 runs in the Cricket World Cup and move top of the standings.

England's captain, fit to play having been troubled by a back spasm against West Indies last time out, thumped 17 sixes - the most by any batsman in an ODI - during an enthralling 71-ball innings as the tournament hosts racked up 397-6 after electing to bat.

Morgan's glut of maximums enabled England to set a world record of 25 in an innings, while the match featured 33 sixes – a new World Cup high.

Afghanistan, who remain winless, predictably came up well short in reply but they showed admirable resolve to reach 247-8, Hashmatullah Shahidi top-scoring with 76 after recovering from a nasty blow to the helmet.

Jonny Bairstow (90 from 99 deliveries) and the prolific Joe Root (88 from 82) made valuable contributions for England, while Moeen Ali blasted 31 not out from nine balls at the death.

Yet it was Morgan who took centre stage in stunning fashion, his sixes all coming in the arc between long-off and backward square-leg courtesy of a series of punishing pulls, drives and slog-sweeps.

Morgan was given a life on 28 when Dawlat Zadran misjudged a chance at deep midwicket off Rashid Khan. The mistake proved painfully costly for Afghanistan and Rashid, who finished with 0-110 from nine overs, the most expensive analysis in World Cup history.

Rohit Sharma, AB de Villiers and Chris Gayle have all managed 16 sixes in an ODI innings, but Morgan went one better in Manchester as he compiled the fourth-fastest hundred in World Cup history.

While the skipper's contribution was outstanding, the efforts of Root - who now has 367 runs in the tournament from five innings - should not be overlooked. England's number three once again fulfilled his role to perfection, ticking along at roughly a run a ball while eschewing risk. By contributing 43 off 33 deliveries during a third-wicket stand of 189 with Morgan, Root did exactly what was required, unselfishly giving as much of the strike as possible to his partner.

Jason Roy's absence was hardly a factor as England romped to victory without their in-form opener, who has been sidelined by a hamstring tear.

However, James Vince failed to make the most of his opportunity at the top of the order, departing for 26 after a start that had promised much.

Roy has already been ruled out of Friday's clash with Sri Lanka, at the very least, and Vince will be eager not to waste another chance with uncertainty surrounding his fellow batsman's availability for the remainder of the tournament.