The Jamaican Government is looking at divesting its shares in the Central Waste Water Company, the Jamaica Public Service Company, and the Jamaica Mortgage Bank.

Speaking at the listing of the Wigton Windfarm on the Jamaica Stock Exchange (JSE) on Wednesday, Prime Minister Andrew Holness said the new divestments would take place in the “short to medium term.”

Regarding the Jamaica Mortgage Bank, Holness said Cabinet submission has been approved “for us to move forward with that divestment. The modality, whether it is an IPO or otherwise, will be declared shortly”. 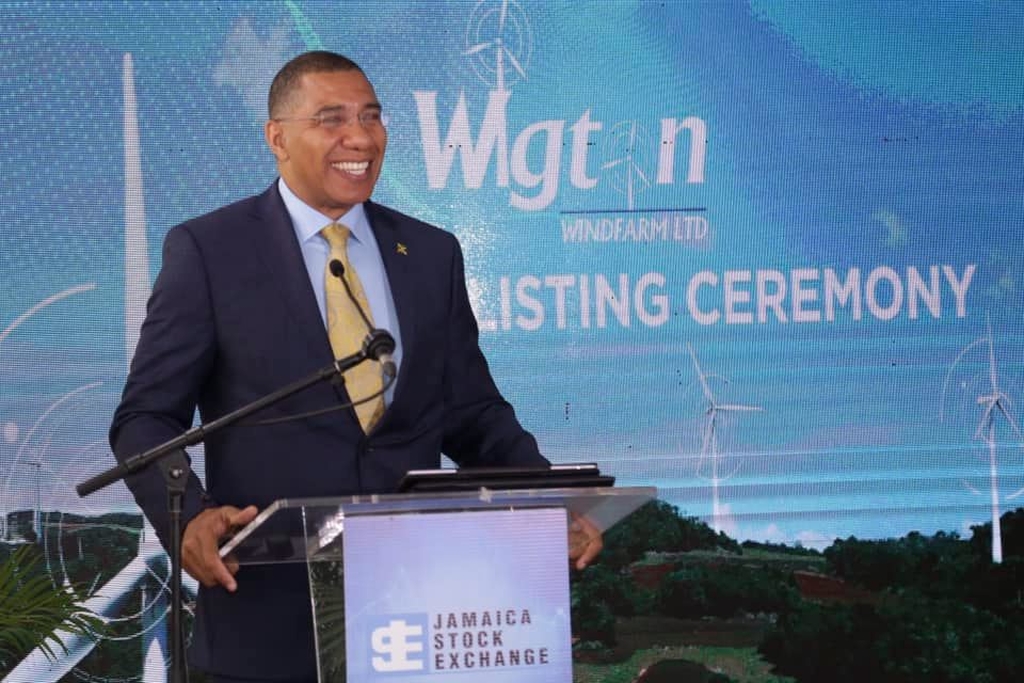 “The government has a duty to make sure that there is a steady flow of investment-grade assets in the market to address the liquidity that is there and the need for investment as a good tool of monetary and fiscal management of the government’s affairs,” Holness said.

The Wigton Windfarm listing follows the success of the company’s initial public offering (IPO), which saw some 31,200 Jamaicans taking up the opportunity to own 11 billion shares in the company.

The offer was oversubscribed as the IPO generated some $14 billion. Each share was sold for 50 cents.

Holness said the government is being instrumental and proactive in promoting ownership while facilitating wealth creation for Jamaicans at all levels.

“Now we are expanding that concept of ownership to the average Jamaican to say that you can own a piece of a profitable company, and more than that, as a shareholder you have a powerful vote, not just the directors. I believe the government has fulfilled its policy objectives and, indeed, the higher objective of starting the ownership culture,” Holness said.

He argued that there is a significant gain in value in owning assets in companies. “The investment that you have made in Wigton is one that I am certain will yield great future gains,” he said.

In her remarks, Managing Director of the JSE, Marlene Street-Forrest, said over 64 per cent of those who invested are under 50 years of age, with approximately 50 per cent under 40.

“The gender mix was also quite interesting, as more females applied for shares within this IPO that is 56 per cent to 44 per cent female-male ratio. The average spend for a new investor was approximately $124,000, which on the basis of all this, one can conclude that the public believes in this company and expects that it will continue to do well. This is confirmed by the oversubscription of the offer by over 158 per cent,” she said.

For her part, Minister of Science, Energy and Technology, Fayval Williams, said the IPO has provided an opportunity for many ordinary Jamaicans, especially public-sector workers, “to kick-start their investment in stocks”.

“As a Government, we are pleased to have been able to provide the opportunity for our people to own a national asset,” the Minister said.

Gary Peart, CEO of Mayberry Investments Limited, lead broker of the IPO in his closing remarks thanked all the teams that made this historic day possible.

A subsidiary of the Petroleum Corporation of Jamaica (PCJ), Wigton Windfarm is the largest wind energy facility in the English-speaking Caribbean and was built by the Government to help diversify Jamaica’s energy mix.

The company began operating in 2004 with the commissioning of a 20.7-megawatt generating plant, Wigton I.

This was followed by the development of Wigton II in 2010, which generates 18 megawatts of energy. Wigton III, the 24-megawatt expansion of the facility, was officially commissioned into service in June 2016 by Prime Minister Holness.