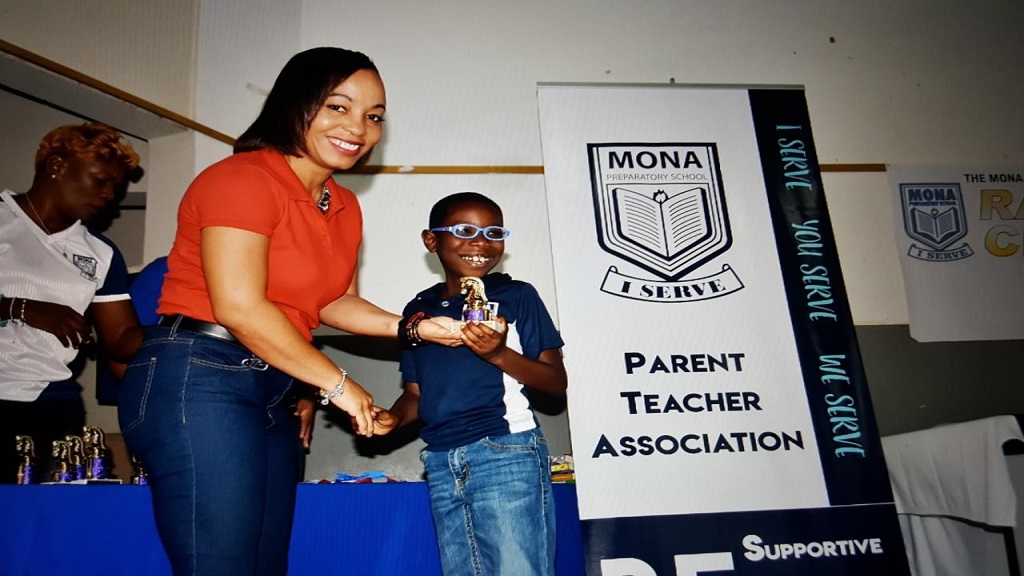 Dionne Smallhorne, Operations Manager, Express Canteen Services, makes a presentation to one of the many budding chess players at the Rapid Chess Tournament, which was hosted recently by Mona Prep School PTA at Hope United Church, Old Hope Road.

Mona Preparatory and the Jamaica Chess Federation have credited the move by Express Canteen and other sponsors for contributing to the inaugural Rapid Chess Tournament.

The tournament, which attracted 74 students from 18 Prep and Primary schools, was hosted recently by the Mona Prep PTA at Hope United Church Hall. Both are located on the same premises on Old Hope Road in Kingston.

“Chess is a game that forces one to think and helps to build critical thinking, which are the ‘new’ buzz words for the Primary Exit Profile (PEP). The aim is to create the awareness of the game and how it can build one skill in critical thinking,” said Natalia Blake, Sports Director, Mona Prep PTA.

Express Canteen provides menu services to the institution and when asked about their reciprocal effort, Blake said: “We thank Express Canteen for being part of this event and it is good corporate citizens such as them that makes tournaments such as these a success.”

“Express Canteen is pleased to have supported Mona Prep PTA in this their first chess tournament. One of the mandates of our business is to not only be the nutritional partner of choice but to also be good corporate citizens. We applaud Mona Prep PTA for organising such a tournament as it gives our younger generation an avenue to excel and to showcase their respective talents,” said Foster.

“Chess is a sport that not only challenges the mental fortitude of its participants, but it develops other life skills that they will carry with them beyond Prep school,” Foster continued.

Competition took place in several categories at the tournament, ranging from kindergarten to Grade Six. There were various prizes for participants who placed from first to fifth, and all players received a Certification of Participation.