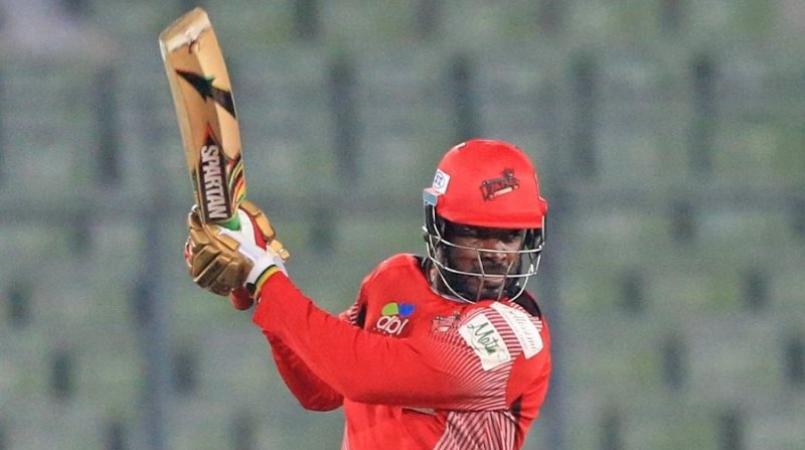 Chris Gayle run out for 94.

Moeen Ali blasted a 53-ball century as England moved closer to a One-Day International (ODI) series victory over West Indies with a crushing 124-run win despite fireworks from Chris Gayle in Bristol on Sunday.

All-rounder Moeen smashed 102 off only 57 deliveries, the second-fastest hundred by an England player, after Joe Root (84) and Ben Stokes (73) laid the foundations.

Moeen, who hit eight sixes, set a world record by taking only 12 deliveries after passing 50 to bring up his third ODI hundred, helping England to a mammoth 369-9.

Root broke Graham Gooch's record (1277) for the most international runs in an English summer during another classy knock, putting on 132 for the fourth wicket with Stokes.

Gayle, back after hamstring trouble kept him out of the rain-abandoned second game, made a typically entertaining 94 from just 78 balls to give the Windies hope.

Jonny Bairstow scored a maiden ODI ton in the first game, but fell for 13 when he was caught and bowled by Jason Holder, who also dismissed the out-of-sorts Eoin Morgan first ball after Alex Hales went for 36.

Root and Stokes steadied the ship from 74-3, the Test skipper making it look easy with some elegant strokes to move to 50 from 41 balls and Stokes raising his bat after facing 44 deliveries.

Moeen then took centre stage, hitting 24 off five balls of an over from Cummins to pass 50. Gayle put down a straightforward chance to get rid of the rampant all-rounder on 87 and he capitalised by reaching three figures by clubbing Cummins wide of long-on for six.

The magnificent Moeen eventually holed out in an eventful penultimate over during which Nurse dropped him twice off his own bowling, England taking 93 off the last six overs.

The Windies lost Evin Lewis in David Willey's first over, yet some typically clean hitting and great timing from Gayle gave England cause for concern.

A third six from the left-hander took him to a 38-ball half-century, but Plunkett had Shai Hope (20) caught behind and Marlon Samuels (11) went the same way when he was harshly adjudged to have feathered through to Buttler on review.

Gayle gave Moeen a dose of his own medicine by easing him for three consecutive sixes to move into the 90s, but was run out by a direct hit from Rashid as he casually ambled through for a single.

Holder (34) struck some lusty blows and Jason Mohammed (38) got a start, but the impressive Plunkett and Rashid finished off the job under dark skies to put England 2-0 up.