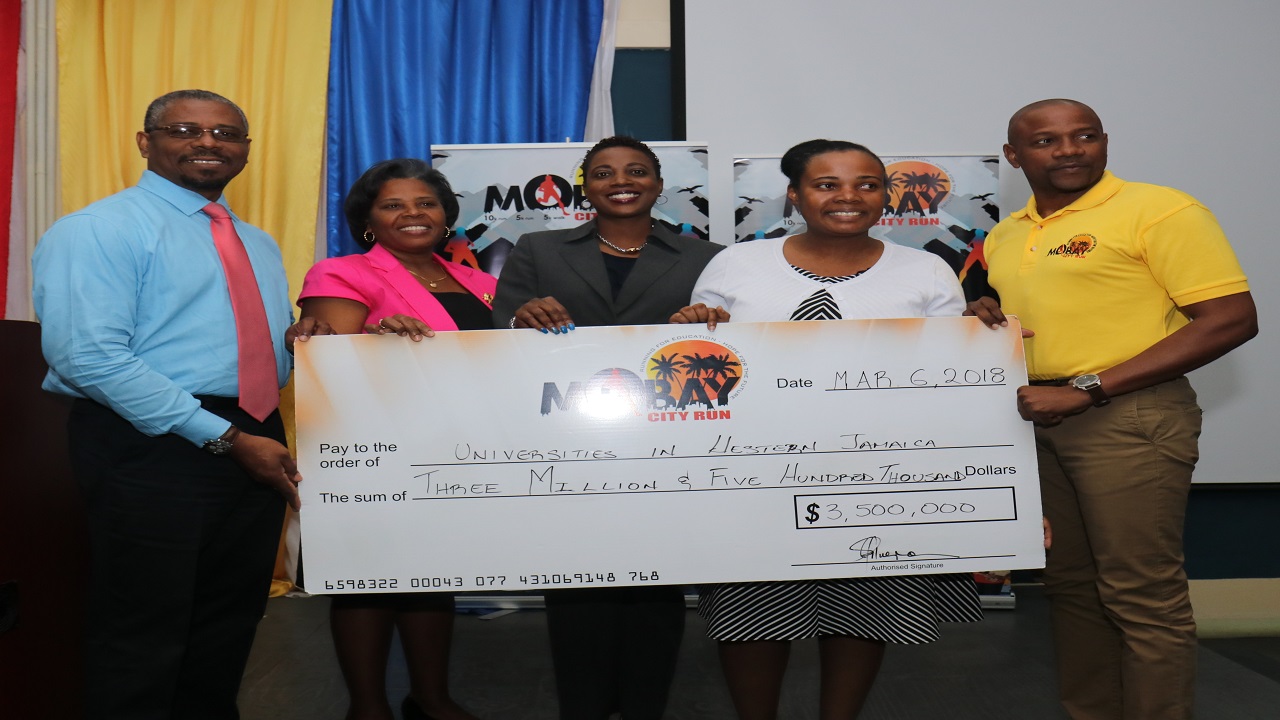 Teachers and other stakeholders from several tertiary and early childhood institutions in western Jamaica came out Tuesday morning for the ‘Official Cheque Presentation’ appreciation ceremony courtesy of the MoBay City Run charity organization.

The proceeds, which came from the 2017 edition of the annual 10k/5k run, were given to assist needy students from the region in their educational endeavours.

“Last year, the early childhood sector was brought in as a beneficiary of the programme and to say it was timely would simply be an understatement.”

Seymour-Hall, who was the keynote speaker at the ceremony held at the UWI Western Campus, noted that the Government has been making an aggressive push to streamline and improve early childhood education, adding that initiatives like the

MoBay City Run “can only assist in helping us to achieve the desired goals.”

“I know that one of the stated goals this year of the MoBay City Run organization is to improve on what they did last year so even more children from the early childhood sector can benefit,” she added.

“Early childhood is one of the most critical areas in our education system. This is what we call the formative years…where the brain starts developing and where education…the art of learning…actually begins.”

Acting Director, University of the West Indies, Western Jamaica Campus Patrick Pendergast, said words cannot begin to describe the impact the Mo Bay City Run has been having on education in the region and by extension the entire Jamaica.

“We might very soon, based on what has been transpiring, have to call this organization an institution here in western Jamaica,” Prendergast noted.

“There is really no substitute for a good education and what the MoBay City Run has been doing is to help students, many of whom are from volatile communities, realize their dreams.”

For her part, a beaming Janet Silvera, founder and chief organizer of the MoBay City Run, said the event has evolved beyond her wildest expectations “where many dreams can now be realized.”

She pointed out that that the MoBay City Run has raised and disbursed more than $15 million since its inaugural in 2014, adding that “these funds have contributed to many of our students realizing their dreams…helping them to graduate and helping them to make something of their lives.”

‘I Love MoBay’ initiative off to a positive start