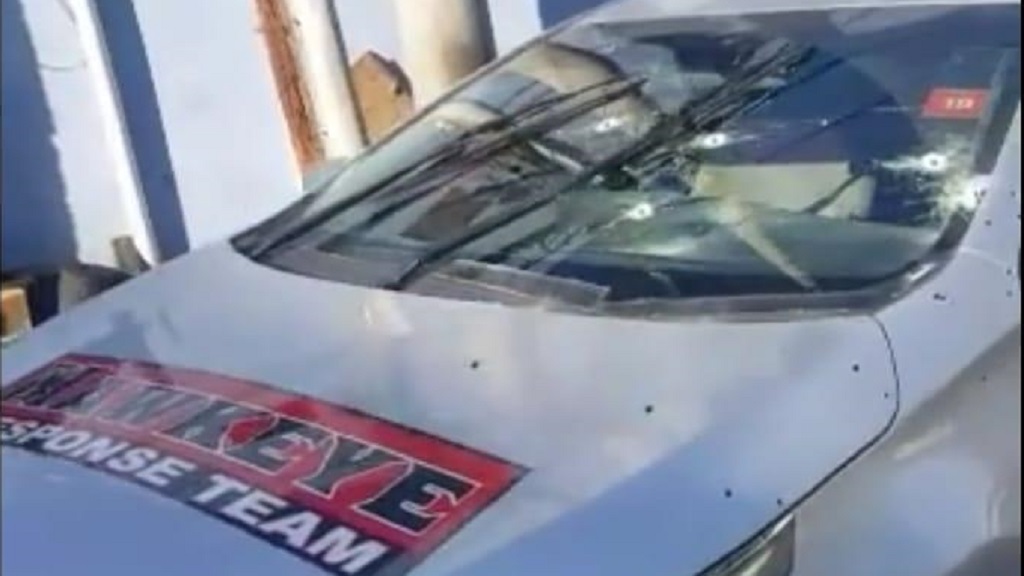 The Hawkeye Security vehicle in which one of two men who were killed during a robbery in Montego Bay on Sunday morning, was cut down by marauding gunmen.

The Montego Bay Chamber of Commerce and Industry (MBCCI) and the Jamaica Hotel and Tourist Association (JHTA) are expressing growing concerns about the rising crime trend in St James, especially following a bloody Sunday in which five persons were reportedly murdered in separate incidents.

The two private sector bodies on Sunday issued a joint release articulating their collective concerns about the escalating crime and violence in the parish in the aftermath of the state of emergency which ended there on January 31, after almost a year in existence.

"The Montego Bay Chamber of Commerce and Industry and the Jamaica Hotel Tourist Association note their increasing concerns regarding the trend of criminal activities within the city of Montego Bay and the parish of St James since the announced intentions and actual withdrawal of the Enhanced Security Measures (ESM)," the release from the MBCCI and the JHTA stated.

"The MBCCI and the JHTA are calling on the GOJ (Government of Jamaica) and the (security forces) to hasten the implementation of the relevant policies, legislation and strategies to bring an instant halt to this undesirable trend that has returned to the city and parish of St James," the release said.

A member of the Jamaica Defence Force (JDF) from a deployment of personnel from the security forces on the streets of Montego Bay recently. The Montego Bay Chamber of Commerce and Industry and the Jamaica Hotel and Tourist Association are collectively calling for the type of strong security presence to minimise the likelihood of the ongoing crime wave in the resort city.

Reports of the killings on Sunday started about 6:30 a.m. when the body of a woman with its head bashed in, was found along a beach in Montego Bay.

The deceased has been identified as Kerry-Ann Campbell of John’s Hall in St James.

About 8:00 a.m., two men, 61-year-old Canute Earle, a security guard of Norwood; and 41-year-old Floyd Wilson, a driver of Rosemount Gardens, both in St James, were shot and killed by gunmen who robbed an undetermined sum of cash, reportedly in the millions, along Jarrett Street in Montego Bay.

About 15 minutes later, Allen Walters, otherwise called ‘Hot Beer’, of Hendon, Norwood was pronounced dead at the Cornwall Regional Hospital, where he was taken by residents who found him suffering from what appeared to be a gunshot wound.

Before the morning ended, another man was shot and killed in Farm Hill in the parish. He had been identified as 30-year-old Suniel Foskin.