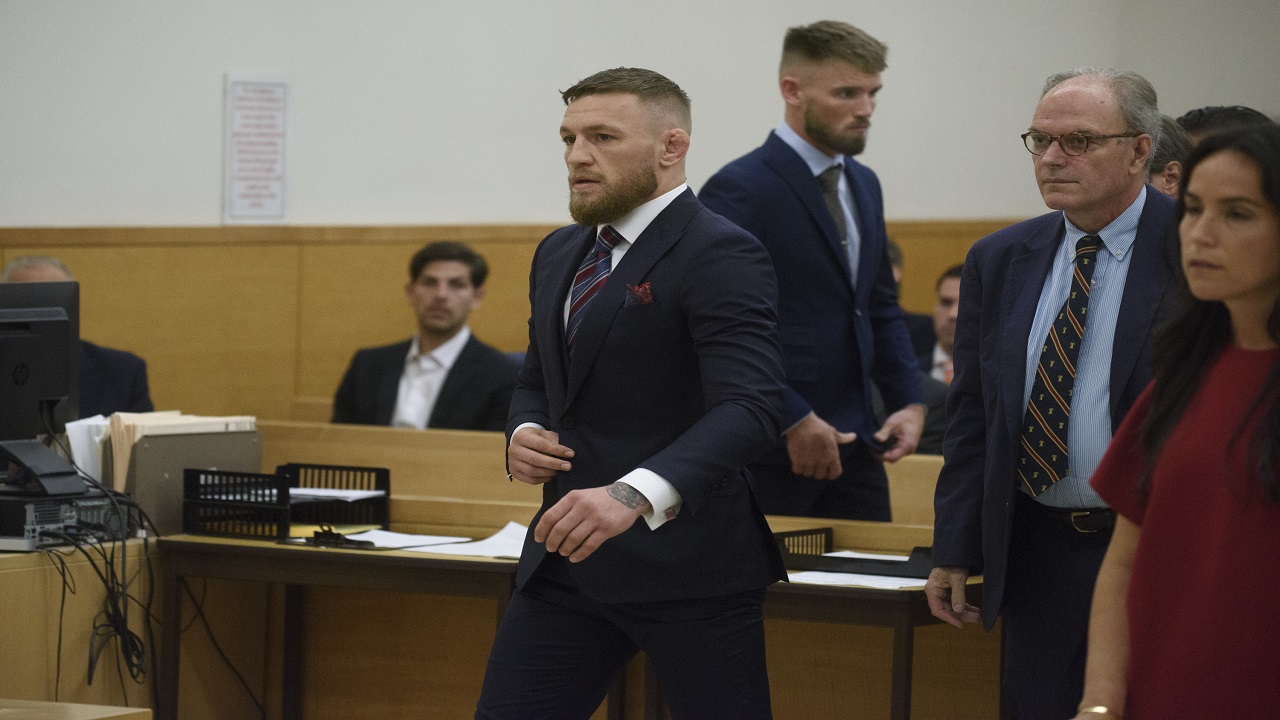 This time, Conor McGregor didn't put up a fight.

The mixed martial arts star pleaded guilty on Thursday to disorderly conduct and will perform five days of community service to resolve charges stemming from a backstage melee at a New York City arena in which he was caught on camera hurling a hand truck at a bus full of fighters.

McGregor will also be evaluated for an anger management program and barred from contact with fighters injured in the mayhem after a news conference for the UFC 223 event at Brooklyn's Barclays Center in April.

There are no restrictions on McGregor's travel. If he stays out of trouble for a year, his record will be wiped clean. If he violates the terms of his plea deal, he could be jailed for up to 15 days. Prosecutors said he's already paid to fix the bus.

"I just want to say I'm thankful to the DA and the judge for allowing me to move forward," McGregor said outside a Brooklyn courthouse. "I want to say to my friends, my family, my fans, thank you for the support."

The 30-year-old Irish brawler, who last month said he regretted his actions, then rushed to a waiting SUV with his entourage, separated by bike-rack barricades from dozens of photographers and reporters and a self-professed superfan.

"You're the champ Conor!" Robbie Fox yelled, an Irish flag draped around his neck. "They won't do anything to you Conor, you're the champ!"

McGregor, clad in a tight, blue pinstripe suit, was joined in court by his 25-year-old friend, fellow fighter, Irish citizen and co-defendant Cian Cowley, who was sentenced to three days of community service and anger management.

Prosecutors said the sentence will allow McGregor to "reflect on his conduct and give back to society." The charges to which he and Cowley pleaded guilty are technically violations, not criminal offenses.

McGregor, once the UFC's simultaneous 145- and 155-pound champion, hasn't fought since the fracas.

The UFC stripped him of its 155-pound championship belt in April because he had not fought in 17 months. During that time, McGregor turned to boxing and secured a guaranteed $30 million payday despite losing a highly anticipated bout last year to Floyd Mayweather Jr.

The UFC declined to comment Thursday on the outcome of McGregor's case.

Last week, McGregor attended the World Cup final in Moscow as a guest of Russian President Vladimir Putin and posed with him in a photo posted on Instagram. In the caption, McGregor called Putin "one of the greatest leaders of our time."

The day before, on McGregor's 30th birthday, his girlfriend revealed on Instagram that she was pregnant with their second child.

McGregor, widely known for his fight-related antics, was seen on camera attacking the bus in a Barclays Center loading dock after a press event ahead of UFC 223, which featured the sport's biggest card of the year.

He and an entourage that UFC president Dana White described as "20 hoodlums that flew in from Ireland" crashed the event allegedly looking for retaliation against main event fighter Khabib Nurmagomedov, who had been in an altercation with McGregor's friend Artem Lobov.

Video showed McGregor tossing trash cans and being blocked from throwing a barricade before he launched the hand truck. Fighters Michael Chiesa and Ray Borg were hurt by shattered glass, forcing them from their bouts.

Nurmagomedov, the current 155-pound champion, was on the bus and said he had to be restrained to keep from fighting McGregor. In an online chat with fans this week, Nurmagomedov said he'd be interested in taking that battle to the UFC octagon.

White said McGregor justified the confrontation in a text exchange just before he turned himself in to police. According to White, he said it "had to be done."