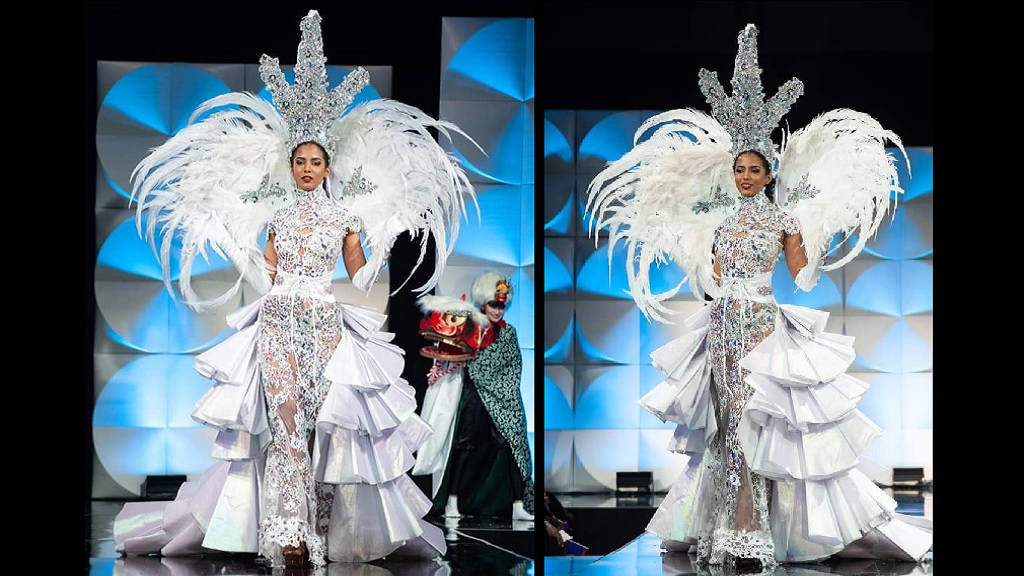 The Miss Jamaica Universe organisation is being hammered on social media sites for its use of the infamous 'White Witch of Rose Hall', Annie Palmer, as the country's national costume at the Miss Universe pageant being held in Atlanta, Georgia.

"Annie Palmer, THE LEGEND OF ROSE HALL.... Dubbed the White Witch of Rose Hall, local folk legend has it that Annie Palmer ruled the 18th century plantation with an iron fist and drove fear in the hearts of loved ones and enemy’s alike," stated the caption accompanying the photographs.

It continued: "Her iconic home, the Rose Hall Great House is a national heritage site in Montego Bay Jamaica and still stands magnificently today after almost three hundred years as a popular visitor attraction where many claim they have spotted Annie Palmer’s ghost.... Created by Uzuri International."

The reactions to the custome have been mixed across all social media outlets.

On Facebook, one user, Laurel Bryan commented, "Beautiful, finally ja is finding different themes for their costumes 🇯🇲 so rich in culture should incorporate every story.🇯🇲🇯🇲🇯🇲🇯🇲🙏🙌😍👑."

Another Facebook user, Branden Fashionb Solomon glorified the costume by writing, "This costume definitely depicts the Annie Palmer team....love it."

However, Travis Dre, another Facebook user, had a different opinion and wrote, "Am I the only one in the comments that thinks dressing up as a slave owner is.. um a horrible idea? How is this rich in culture? What's going on?"

Similar opinions were expressed on Twitter to the use of the depiction of Annie Palmer, who it is alleged murdered several of her slaves, as Jamaica's national costume at the Miss Universe contest.

Attorney and social commentator, Jodi-Ann Quarrie tweeted, "Imagine we just celebrated Emancipation and Independence Day fi come a road wid a costume CELEBRATING a slave owner. IMAGINE! The blood of the enslaved in the soil of that plantation cry out. #AsMyAncestorsWeep."

Twitter user, Rhondene Wint opined, "I... Of all the greatness that emerged from Jamaica's history, she chose to pay homage to our most savage slaver? Slavery itself was brutal so Annie Palmer must've been especially egregious to have made our history books. I'd like hear team's line of reason?"

'Annie Palmer' has since been trending on Twitter as several persons have been joining the discussion regarding the use of the costume.

The Miss Jamaica Universe Organization is yet to react to the ongoing public backlash.

But is the story of Annie Palmer true or is it in fact legend?

According to the website, Jamaica Travel and Culture.com, "The basis for most of the White Witch legend seems to come from H.G. de Lisser's 1928 novel, 'The White Witch of Rose Hall'. This was a popular novel telling the gripping story of an Annie Palmer that lived a very different life to that indicated by the records available from the time."

As the website suggested, "the true story of Rose Hall begins long before Annie Palmer was even born."

The website indicated, "Rose Hall's first mistress was Rosa Palmer (nee Kelly), a daughter of Irish immigrants living in Jamaica. In 1746 Henry Fanning, an Englishman, was anticipating marriage to Rosa so he purchased a 290 acre plot of land in St. James Parish on which to build their married home. The two were married in 1747 but Fanning died within months of the marriage."

It continued, "Rosa married again in 1750 to George Ash, a landowner in St. James. Ash spent £30,000 building a marvelous home on the land with ornately carved mahogany doors, floors and staircases. The estate was named Rose Hall in Rosa's honour. Sadly for the couple Ash did not survive long after the property was completed and died in 1752.

"The following year, Rosa entered a brief and unhappy marriage with the Hon. Norwood Witter, a widower from Westmoreland. Witter died in 1767, leaving Rosa a widow for the third time.

"Rosa finally found happiness and a lasting marriage the following year when she married the Custos of St. James, John Palmer who owned the neighbouring Palmyra estate."

The website claimed, "Palmer was a widower with two sons living in England. The two were happily married until Rosa died in 1790, leaving Rose Hall to John Palmer in her will. As a tribute to his wife, Palmer commissioned renowned artist John Bacon to carve a memorial to her in the St. James parish church."

"John Palmer later died in 1797, leaving Rose Hall and Palmyra in trust for his sons in England. They never visited Jamaica or had children by the time they died (the last one died in 1818) so the estates passed on to Palmer's grand nephew John (or possibly James) Palmer.

"John Palmer moved to Jamaica to take charge of Rose Hall and soon married Annie Patterson (the lady who became the subject of the White Witch of Rose Hall legend).

"Little is known about the lives of Annie and John but all evidence points to then being a happily married couple and model citizens.

"John Palmer died in 1827. His death was widely reported in Jamaica but there has been no recorded suggestion of foul play. There is evidence to suggest that Annie Palmer vacated Rose Hall by 1830 and died in Bonavista near Anchovy in 1846," the website said.