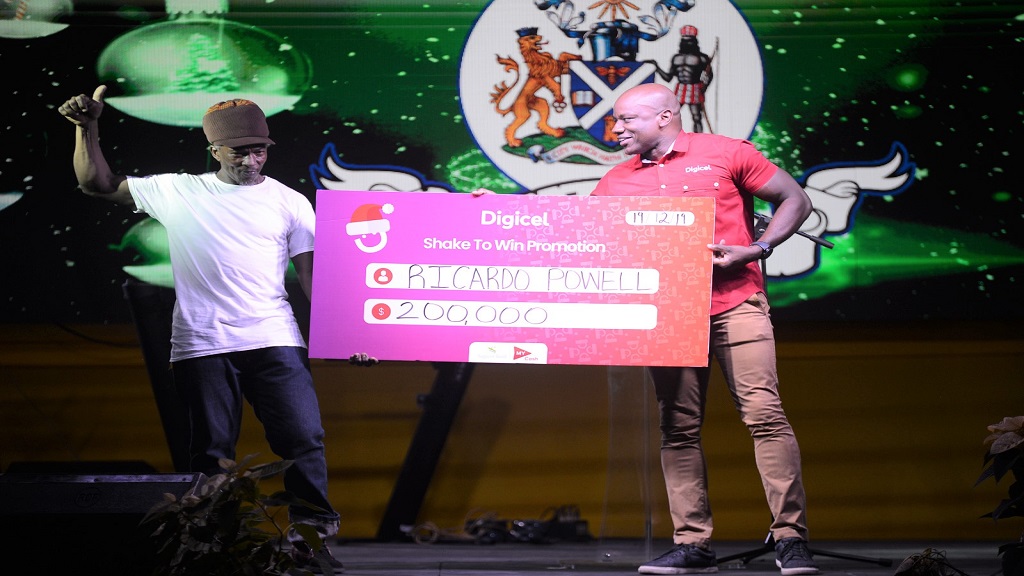 Fifty-five year old farmer, Ricardo Powell, considers himself no ordinary Digicel customer and no ordinary weekly winner of $200,000 in the Digicel Shake to Win Christmas promotion. Powell walked away with the cash prize after he opened the new MyDigicel app on his smartphone, tapped the Shake It icon, and shook the phone to see what he won on Guaranteed Win Day, Saturday, December 14, 2019.

In Powell’s words, the win was a fitting outcome for years of being a “foundation Digicel customer”, having gotten his first mobile phone when Digicel introduced the technology to his community in St Thomas back in 2001.

But what makes Powell think he truly deserves the prize is the quiet advocacy he’s done for Digicel while going about his business selling phone accessories for over almost 18 years. Known in uptown and downtown Kingston as “Phone Face King” and “Charger God”, Powell said this was a result of him spotting an early opportunity to provide mobile phone users with protective cases and chargers for a wide array of devices.

As far as his $200,000 win goes, Powell added: “Mi deserve it. Honestly. Mi proud a every opportunity Digicel mek mi have and mi really happy fi this win.”

Public Relations and Communications Manager for Digicel, Elon Parkinson, who handed over the symbolic $200,000 cheque to Powell at the Kingston and St Andrew Municipal Corporation’s annual Christmas Tree Lighting ceremony on Thursday, commented: “We live for merry moments like this when we’re able to share more with our customers at Christmastime. Ricardo has been a very loyal customer and we are thrilled to also know that we have contributed to opening up a business opportunity for him.”

Over 20,000 Digicel customers have already won cash and prizes in the Digicel Shake to Win promotion. With a prize pool of over $40 million in cash and prizes, the promotion runs until December 31, 2019.

Every Saturday until the end of the promotion is dubbed “Guaranteed Win Day”, where every eligible customer who shakes in the new MyDigicel app will win a prize. To enter, customers must download the new MyDigicel app, top up $300 or more, purchase a plan, be on or activate a Postpaid Freedom plan.

First time’s a charm for this Digicel customer

Over $30m in prizes for Digicel customers this Christmas