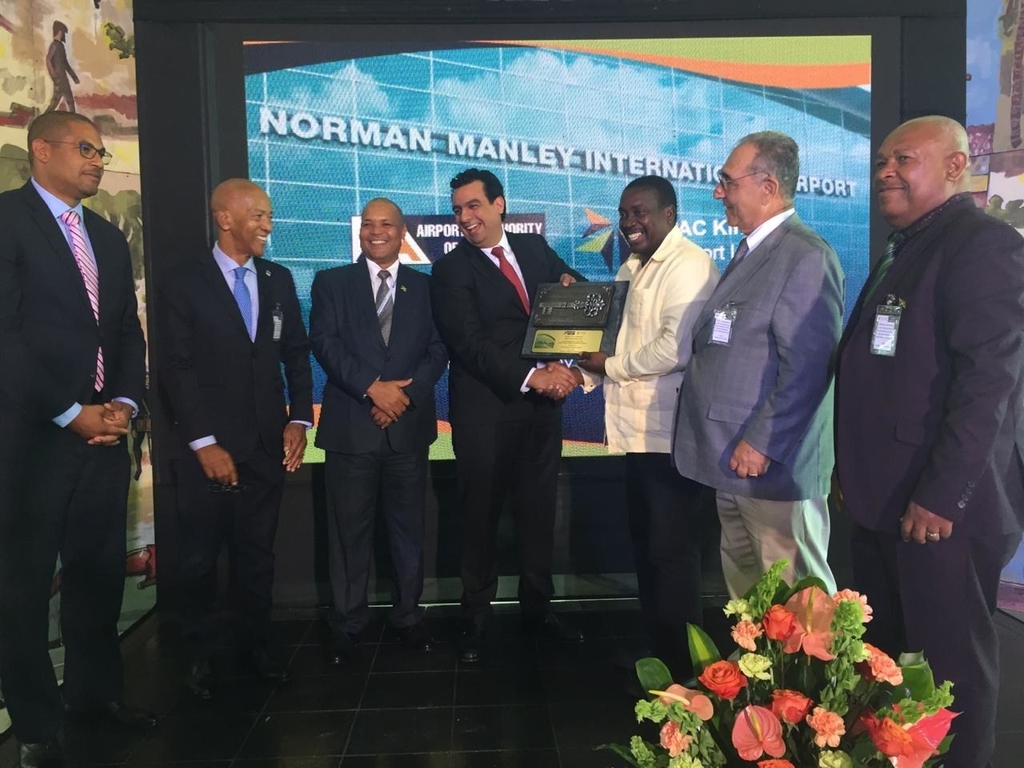 Minister of Transport and Works Robert Montague (third right) joins Raúl Revuelta (centre), CEO of GAP and other officials at the official handover at the Norman Manley International Airport in Kingston.

Under the terms of the contract signed  between GAP and the Government of Jamaica in October, 12 months were granted for the transition and 25 years for the concession.

In a statement on Wednesday, GAP said one of its commitments is to improve the infrastructure and the equipment of the airport.

Therefore, during the first 36 months, it expects to make an investment of US$ 60 million in extension and modernisation works in the Norman Manley Airport.

At the formal presentation ceremony of the Airport's operations, GAP's Director General, Raúl Revuelta, reiterated Grupo Aeroportuario del Pacifico's commitment to diversify its airport portfolio and affirmed that "to compete for the operation of Norman Manley Airport represents a strategic decision that will contribute towards GAP's positioning and it will strengthen the development and growth of Jamaica's main airports."

Kingston's airport is the 14th airport operated by the Mexican airport group. At the end of 2018, this airport had assisted a total of 1.7 million passengers, and 1.4 million in the period comprised between January and September 2019. This represents an 8.4 per cent growth compared to the same period on the previous year; in other words, practically 30% of the country's total traffic.

Grupo Aeroportuario del Pacífico said it has developed a service-commitment culture to improve the flight experience.

Additionally, it keeps close relationships with passengers, airlines, business developers, industry members and, particularly, authorities, in an attempt to contribute to the economic and social development of the communities where it operates.

GAP operates in 12 international airports in Mexico and two in Jamaica, servicing over 330 destinations through 35 airlines. Its shares are listed both on the Mexico and the New York Stock Exchange.

The Jamaican government owns the Montego Bay airport and the concession granted for its operation is for a 30-year period, which will conclude on April 2033.

NMIA operation divested to Mexican entity that operates the SIA

US$40 million for further investment of Sangsters Airport next year