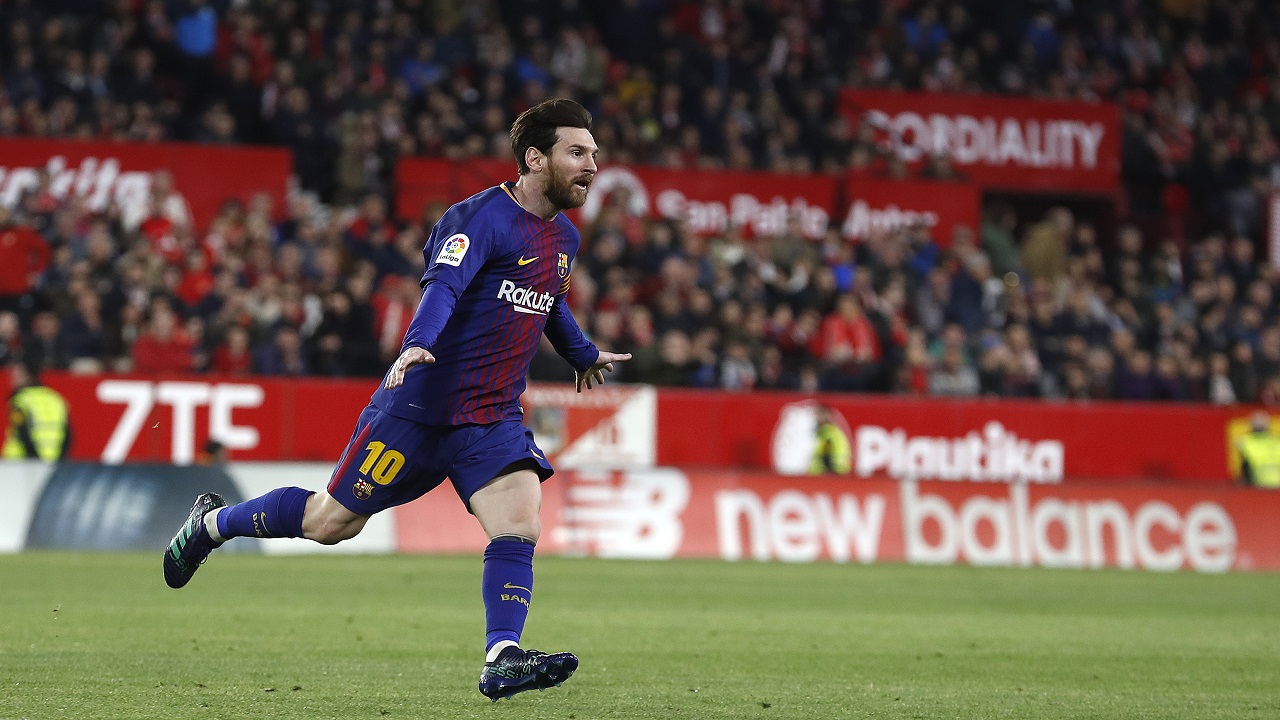 Barcelona's Messi celebrates after scoring against Sevilla during their La Liga football match at the Sanchez Pizjuan stadium, in Seville, Spain on Saturday, March 31, 2018

Lionel Messi kept alive Barcelona's unbeaten streak in the Spanish league by coming off the bench and scoring an 89th-minute equalizer to draw with Sevilla 2-2 on Saturday.

Sevilla led 2-0 until the 88th minute when Luis Suarez scored. Then Messi made his mark again a minute later to keep the Catalan club's 30-match unbeaten run going.

Messi, who recently missed two international friendlies with Argentina because of an unspecified leg muscle problem, started on the bench at Sanchez-Pizjuan Stadium and went on in the 58th, not long after Sevilla scored its second through Luis Muriel.

Franco Vazquez put the hosts ahead in the first half.

Suarez scored from inside the area and Messi quickly got the equalizer with a well-placed left-footed shot into the lower corner, taking his league-leading tally to 26.

Sevilla had good chances for its third goal while it was leading.

Sevilla and Barcelona will play the Copa del Rey final on April 21 at Atletico's Wanda Metropolitano Stadium in Madrid.

Despite the absence of Cristiano Ronaldo, who was rested for Tuesday's match against Juventus in the Champions League quarterfinals, Madrid defeated Las Palmas 3-0 in the Canary Islands to move within a point of second-place Atletico.

Bale opened the scoring in the 26th minute after a long throughball by Luka Modric, making a run from near the midfield line before entering the area and finding the top corner with a powerful left-footed shot.

Benzema converted a 39th-minute penalty kick after Lucas Vazquez was fouled inside the area, and Bale netted his second goal by converting another penalty kick early in the second half after he was brought down inside the box.

"The players who don't get to play often did a good job," Zidane said.

It was the fifth straight win for Madrid in all competitions.

Girona, in its inaugural season in the first division, had won six straight games at home without conceding any goals.

Girona went ahead early in the second half with a shot by Alex Granell, who found the top corner from outside the area.

Girona stayed in seventh place, still in contention for a Europa League spot next season.

Levante remained 17th, but it opened a seven-point lead over Las Palmas, the first team inside the relegation zone. The result extended Levante's unbeaten streak to four matches. It hasn't lost since Paco Lopez took over the team after coach Juan Lopez Muniz was fired.

"We moved a point closer to our goal of avoiding relegation," Lopez said.

Brais Mendez scored in injury time for Celta Vigo to draw at Athletic Bilbao 1-1, a result that kept both teams near the middle of the table.

Celta was ninth, three points ahead of Athletic in 12th.