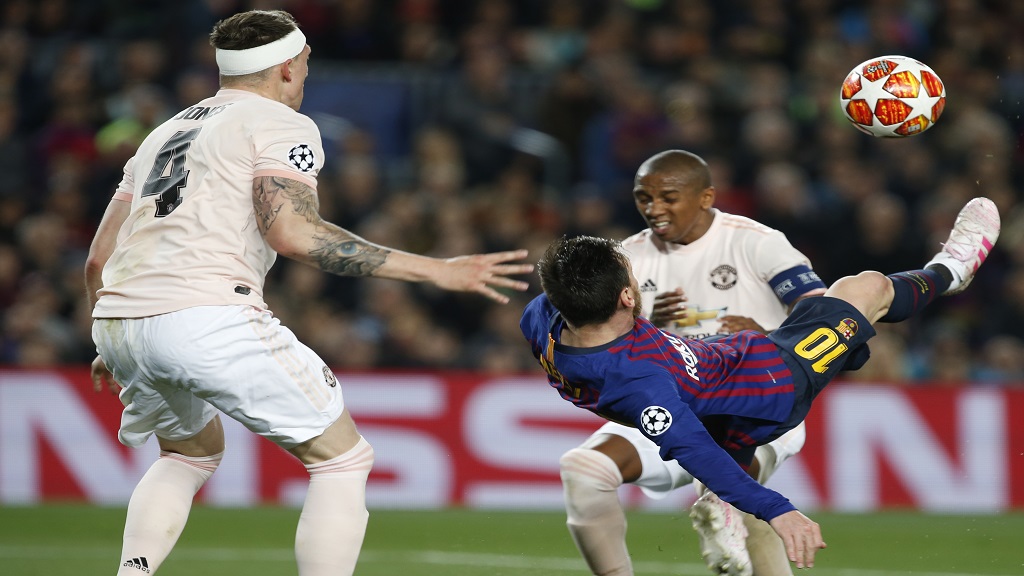 Lionel Messi made sure there was no memorable Champions League comeback for Manchester United at Camp Nou this time.

Messi scored two early goals to help Barcelona beat United 3-0 on Tuesday and reach the Champions League semifinals for the first time in four seasons with a 4-0 aggregate score.

United had arrived at Camp Nou hoping to take inspiration from their Champions League final victory 20 years ago when current manager Ole Gunnar Solskjaer capped a comeback against Bayern Munich by scoring the winner in injury time.

But Messi showed that past glories mean very little when he is playing at his best.

His first goal was had plenty of the familiar Messi magic, as he ghosted past a defender and bent the ball just inside the upright.

The second was largely thanks to a blunder by David de Gea. Messi only managed a tame shot on goal but the Spain goalkeeper let it slip underneath him and into the net.

"The image (we gave) was spectacular. This is who we are," Messi said. "I was fortunate the first went in, I struck it hard and just inside the post. I needed a little more luck on the second. The important thing is that we achieved our goal. We have taken one more step (to the title)."

After not managing a single shot on target at Old Trafford in the first leg, United looked a lot more dangerous going forward at the start. But after Marcus Rashford hit the crossbar, Messi took over with his tournament-leading ninth and 10th goals of the season.

"Messi and Cristiano (Ronaldo) have been the best players in the world for the past decade," Solskjaer said. "And he showed why we think that and why he has won so many titles. If you give him space and timing around the goal he will create chances and score."

Ronaldo will not be joining Messi in Europe's final four.

The Barcelona crowd, which for so long viewed Ronaldo as its main nemesis when he was with Real Madrid, celebrated the Ajax goals when they were announced on the video monitor.

In the opening leg, Messi had his nose bloodied by the arm of Chris Smalling in a collision that Barcelona coach Ernesto Valverde compared to being "run over by a truck."

Messi was back in full force a week later. Far from shying away from contact with rivals, he initiated it with his defense to set an example for his teammates when they were caught off-guard after kickoff.

After Rashford threatened by grazing the bar, Messi outmuscled Ashley Young to win the ball near the right touchline. He then brought the home crowd to its feet as he poked the ball through the legs of Fred, sped along the edge of the box, and drove a left-footed strike around a diving De Gea.

Messi got his double soon with more than a little help from De Gea.

"We started well in the first 15 minutes and I thought, 'We've got something here,'" Solskjaer said. "But then they scored twice in four minutes. ... You could see the difference of the teams tonight. The quality of their finishing was absolutely outstanding."

Messi went close to setting up another goal just before halftime. He made Phil Jones dizzy by changing the direction of his dribble three times. He then played Jordi Alba wide, for the left back to cross the ball to Sergi Roberto arriving at the far post. De Gea made a superb save to block his point-blank effort on the line.

Philippe Coutinho added a third goal with a superb curling strike from long range in the 61st to cap arguably the best performance by the former Liverpool player since joining Barcelona just over a year ago.

Messi cued the attack that ended in Coutinho's goal by playing a long ball down the left to Alba, who knocked it back to the Brazil midfielder to beat De Gea from distance.

The goals ended Messi's bizarre scoring drought in Champions League quarterfinals that had reached 12 matches dating back to 2013.

In total, he has 45 goals in 42 games through all competitions this campaign.