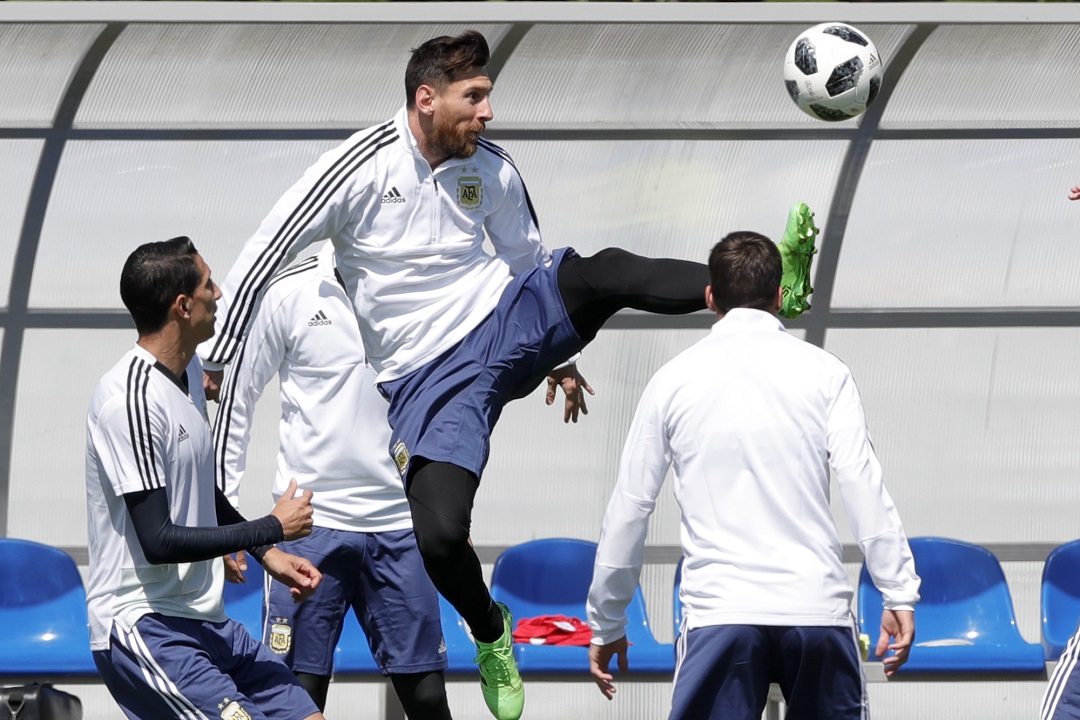 Lionel Messi plays the ball during a training session of Argentina on the eve of the group D match against Iceland at the 2018 football World Cup in Bronnitsy, Russia, Friday, June 15, 2018.

Lionel Messi takes the field for the first time in this year's World Cup on Saturday when Argentina open group play against Iceland, the smallest nation to ever play in the tournament.

The superstar forward goes into the World Cup under enormous pressure to finally win a major international title. Critics of the Barcelona forward believe that void takes him out of the debate as the best player in the history of the game.

Messi is playing in his fourth World Cup and came close to the title in 2014. Although he was named player of the tournament, Argentina lost to Germany 1-0 in the final. Messi took Argentina only to the quarterfinals in his first two World Cup appearances.

He turns 31 on June 24 during the group stage, and this could be Messi's final shot at a World Cup title.

Messi will be the headliner of the Group D match at Spartak Stadium in Moscow, but Iceland could have strong fan support after their improbable run to the quarterfinals of the 2016 European Championship.

Iceland coach Heimir Hallgrimsson does not mind being the darling of the tournament in his World Cup debut and only second major tournament.

Slovakia in 2010 was the last first-time World Cup team to make it to the knockout stage of the tournament and Iceland believes they can make a run, as well. Captain Aron Gunnarsson, who sports a long red beard and plays the role of a Viking warrior, leads the postgame, slow-building clapping exchange between the team and fans that is Iceland's trademark and should energize the crowd.

A look at the rest of Saturday's matches:

Peru captain Paolo Guerrero will be the focus in the Group C match at Mordovia Arena in Saransk.

The striker was suspended for testing positive for a banned substance and the punishment was going to prevent Peru's all-time leading scorer from making his World Cup debut. He fought the ban and received support from the captains of France, Denmark and Australia, the three other teams in Group C.

Guerrero had his penalty reduced after the three rival captains wrote letters to FIFA earlier this year arguing the 34-year-old former Bayern Munich attacker was in danger of missing what could be the only World Cup appearance of his career.

Guerrero has said the failed drug test came from tea served in a cup tainted with coca leaf residue in a Lima hotel. With him in the lineup, Peru is hoping for success in its first World Cup appearance in 36 years.

Denmark have not lost a game in 18 months and are led by Tottenham midfielder Christian Eriksen, who helped the team to six wins and three draws during its final nine qualifiers. That run included a 4-0 win over qualifying group winner Poland and a 5-1 rout of Ireland in the second leg of a two-game playoff to secure Denmark's fifth World Cup appearance and first since 2010.

France will be the big favorite when they plays Australia in a Group C match at Kazan Arena.

France have one of the deepest rosters, but the team has been criticized because some find coach Didier Deschamps' tactical approach boring. When France lost to Portugal in the Euro 2016 final, many fans were disappointed a coaching change was not made prior to the World Cup.

The team is led by Antoine Griezmann, an attacking midfielder who scored 19 goals and had nine assists in 32 Spanish league games last season.

For Australia, striker Tim Cahill is trying to join Pele and former Germany strikers Miroslav Klose and Uwe Seeler as the only players to score at four World Cups. The 38-year-old Cahill is a squad player now and international retirement is creeping up on him.

He knows the opportunity in front of him should he get playing time in the tournament.

"I have put in so much effort to be here. To get on the pitch would be one step, to score would just be amazing. To join the list of names that are on there now would be priceless," Cahill said. "If I get on the pitch I know I am going to try to make something happen. I would love to join the greats, being an Australian, being someone who has broken all barriers."

The Group D match between Croatia and Nigeria will be one of the more overlooked games. Played in Kaliningrad, an outpost wedged between Poland and Lithuania on the Baltic Sea, it is a challenging site for fans and tickets were still available the day before kickoff.

Croatia made the semifinals 20 years ago in France and are appearing at their fifth World Cup. The team has a talented roster that includes Luka Modric, Ivan Rakitic and Mario Mandzukic.

Nigeria have long been considered an underachiever among the African teams and are trying to win only their second game in their last 12 World Cup matches.

Nigeria are the World Cup's youngest squad but have several Premier League regulars, including Arsenal's Alex Iwobi, Leicester's Wilfried Ndidi and Chelsea's Victor Moses. Ndidi is one of three Leicester City players in the squad.