Messi, Argentina scrape into round of 16 with 2-1 win over Nigeria 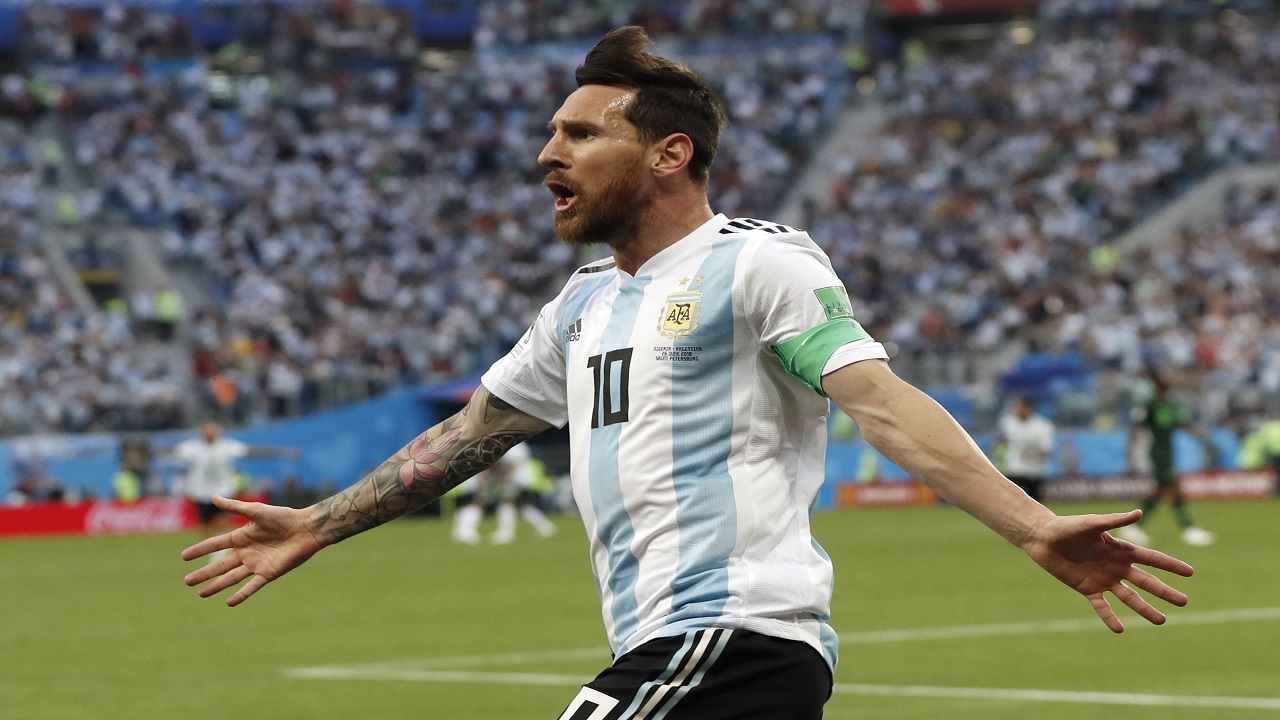 Argentina's Lionel Messi celebrates after scoring the opening goal of his team during the group D match between Argentina and Nigeria, at the 2018 World Cup in the St Petersburg Stadium in St Petersburg, Russia, Tuesday, June 26, 2018. (AP Photo/Petr David Josek)

Argentina scraped into the knockout stage of the World Cup after a tense 2-1 victory over Nigeria in a must-win last group game.

Defender Marcos Rojo scored in the 86th to secure the win with volley from the right to spark wild celebrations on the Argentina bench.

After Lionel Messi's exquisite 14th-minute goal was canceled out by Victor Moses' penalty in the 51st minute, Argentina was in danger of being eliminated without winning in Russia.

It took an unlikely goal by Rojo — a centre back — to save Argentina with a cushioned volley into the corner.

The win gave the Argentines second place in Group D and allowed the soccer-mad nation to forget about the 3-0 loss to Croatia last week that sparked days of soul-searching within the squad and back home.

Argentina will play France in the last 16 in Kazan on Saturday, keeping alive Messi's quest for a first world title. He might have retired from international soccer for a second time — and for good this time — if it wasn't for Rojo's goal.

Messi's teammates poured off the bench to celebrate with him after the final whistle, forming a circle around him. Messi exchanged a long hug with teammate Javier Mascherano, who clinched him tightly.

While Gonzalo Higuain cried nearby, Messi clinched his fist as he turned toward the Argentina fans.

Messi's name adorned the back of most of the Argentina jerseys that dominated St. Petersburg ahead of the game, and received the biggest roar when the teams were read out.

He kicked the ball out of play with his first touch, was tackled with his next, but then he started to put on a show.

Messi's 65th international goal owed as much to Ever Banega's long, driven pass over the defense as the forward's exquisite control on his left thigh, another touch with his left foot, and then a cool right-footed finish into the corner. As Messi fell to his knees and pointed his fingers upward in celebration before being mobbed by teammates, Argentina great Diego Maradona — sitting in a corporate box inside the stadium — placed him arms on opposite shoulders and looked to the sky.

Messi, who later hit the post off a free kick, and the recalled Banega ran the game in the first half for Argentina. The team's biggest problems arose whenever Mascherano lost possession in front of his own defense.

And it was Mascherano who gave away the penalty with a pull on Leon Balogun at a 49th-minute corner. Moses converted — and marked the goal with a somersault — to put Nigeria back in control of the race for second place in the group.

Argentina was facing finishing a World Cup without a win for the first time since 1934, but instead they are headed to the knockout stage.

Nigeria was four minutes away from advancing to the knockout round of a World Cup for the fourth time. As it finished, the African nation ended up third in the group — a point behind Argentina.

Argentina has four days to prepare for its last 16 match against France. It is the first game of the knockout stage.

Messi delivered his best performance of the tournament, with his goal allowing Argentina to take early control of the game.

Yet the standout player might have been Banega, who was recalled to midfield after being on the bench for the first two games and impressed with his work rate and range of passing.

Messi did not crown himself King

Messi did not crown himself King