Menzies: NextPlay exemplifies the power of football to unify cultures 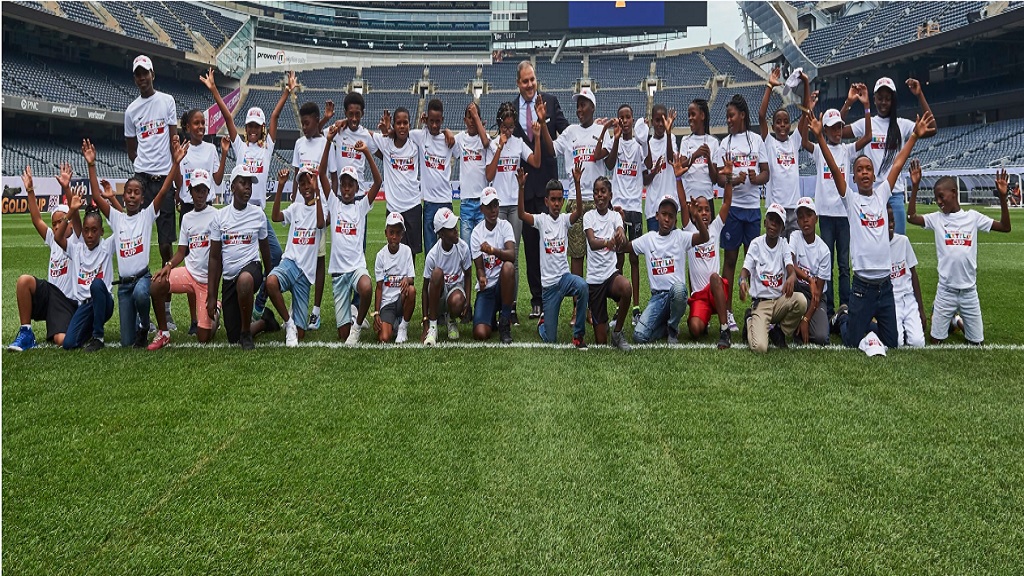 The children from Jamaica, Trinidad and Tobago, The Bahamas and Barbados had the opportunity to meet the Concacaf President Victor Montagliani at the Soldier Field in Chicago as part of the Scotiabank NextPlay event was held in Chicago, Illinois.

Some 85 children under 11 years old – 40 of them from four Caribbean territories and the others from the surrounding Chicago area – intertwined in a confluence of cultures with football the bonding agent.

The children from Jamaica, The Bahamas, Barbados and Trinidad, and Tobago were the winners of their respective Scotiabank NextPlay Cup tournaments played among primary schools.

As part of their prize, they were flown to Chicago to integrate and to also immerse themselves into the Gold Cup experience, which is another initiative in the continued build-out of the NextPlay platform.

On Saturday at CIBC Fire Pitch, the kids from diverse backgrounds took part in various fun activities but were ultimately united by the power of football.

At the end of the day’s activities, total strangers had formed bonds, some of them taking the first steps to even becoming friends down the road.

Menzies, Concacaf’s Female Football Coach of the Year, says the game has a language of its own and had the moving force to break down barriers as it relates to race, class, and creed.

“Football does not discriminate, which is very good. Here you have different creeds, different colors, and different socio-economical backgrounds, but NextPlay exemplifies here a unifying of the different cultures and I hope Concacaf and Scotiabank will sustain this program throughout the Caribbean,” he said.

“Football is a common language as it does not matter where you are from it just evolves and the values of football don’t change, so it’s easy to bring people together and we need to take advantage of the game to make the environment better,” Menzies added.

As a special guest at Saturday’s event, the USA-based Jamaican coach said he used the opportunity to speak to as many kids as he could, urging them to make the best of the opportunities that have come their way through the NextPlay Program.

“I told the kids that everybody is not going to go on to be professional players.  "But they must listen and learn and take the qualities they get out of football as it is an avenue and vehicle for the rest of their lives because the things they learn here no one can take away and they just need to apply that in life,” Menzies noted.

Meanwhile, Concacaf’s Director of Football Jason Roberts says while it was pleasing to see kids from varied backgrounds coming together on Saturday, that manifestation addresses another critical aspect of the NextPlay portfolio.

“It speaks to the integration of the program with boys and girls of different ages interacting… and then you get that interaction from the kids from the Caribbean, who have been a part of the NextPlay program.

“Today (Saturday) It started as the kids being a little stand-offish, but by the end of it, through football, through interaction of playing and being teammates, you see the bonds start to develop between kids from different sides of the world with various issues, but what we find is that football is that singular thing that brings them together.

“I think as proud as we are at Concacaf in putting football first, our competitions, how we are developing football, I think we are equally proud how we are using football as a vehicle for social change,” Roberts ended.