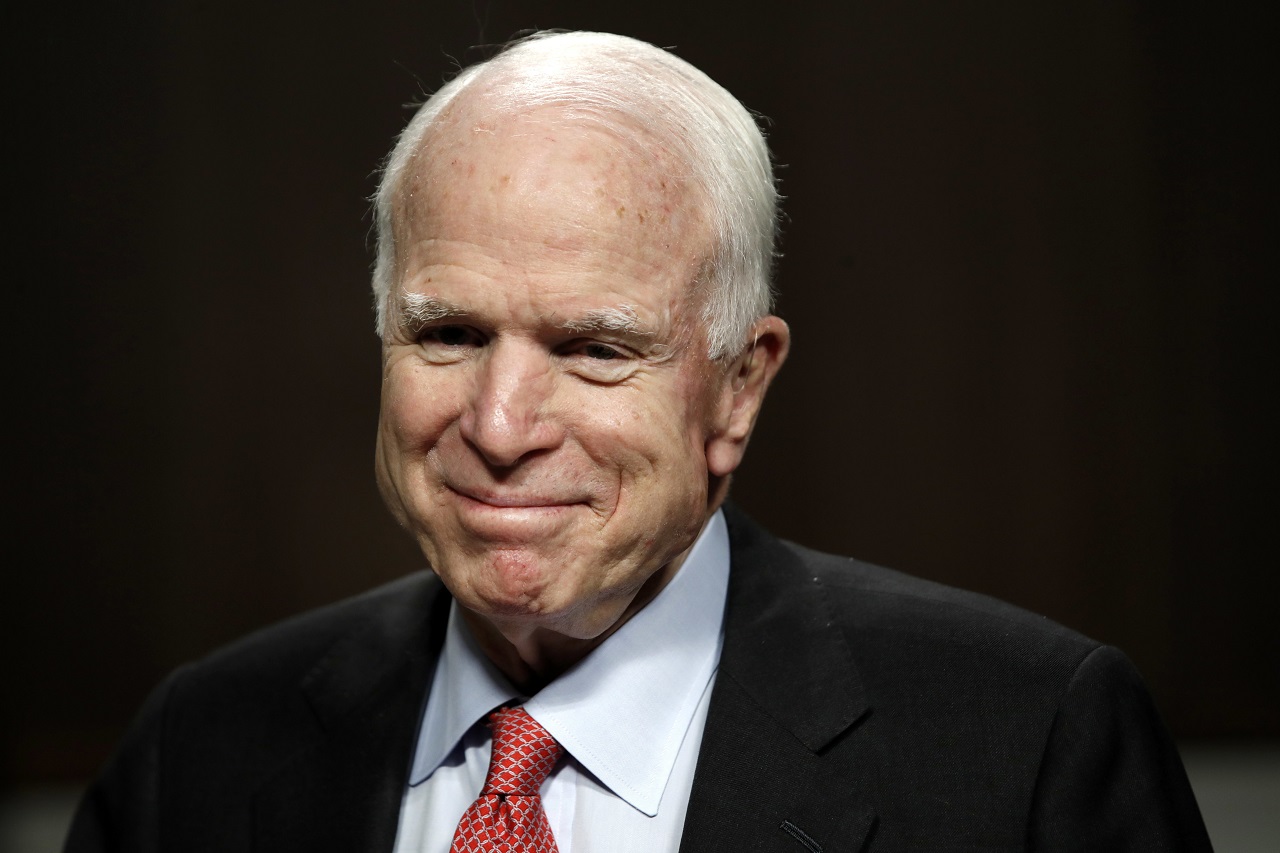 In this July 11, 2017, file photo, Sen. John McCain, R-Ariz., arrives on Capitol Hill in Washington. McCain has been diagnosed with a brain tumor after a blood clot was removed.

Sen. John McCain's diagnosis of brain cancer jolted the Senate where Republicans and Democrats offered prayers and words of encouragement for a six-term lawmaker with a war hero past.

"The outpouring of bipartisan respect and love for John McCain as he faces this cancer battle reminds us that after all the meanness there is a human side to politicians," said Sen. Dick Durbin, D-Ill., said Thursday. "Count this Democrat in John McCain's corner."

Said Sen. David Perdue, R-Ga.: "John McCain is a friend, a mentor and a true patriot. If anyone can tackle a challenge like this, it's him."

The 2008 Republican presidential nominee and Vietnam prisoner of war who has spent more than three decades in Congress was diagnosed with an aggressive type of brain cancer. The 80-year-old Arizona lawmaker has glioblastoma, according to doctors at the Mayo Clinic in Phoenix, where McCain had a blood clot removed above his left eye last Friday. He and his family are considering further treatment, including chemotherapy and radiation.

"Subsequent tissue pathology revealed that a primary brain tumor known as a glioblastoma was associated with the blood clot," his office said in a statement late Wednesday.

According to the American Brain Tumor Association, more than 12,000 people a year are diagnosed with glioblastoma, the same type of tumor that struck McCain's close Democratic colleague in legislative battles, the late Ted Kennedy of Massachusetts. The American Cancer Society puts the five-year survival rate for patients over 55 at about 4 percent.

The senator and chairman of the Armed Services Committee had been recovering at his Arizona home. His absence forced Majority Leader Mitch McConnell, R-Ky., to delay action on health care legislation.

South Carolina Sen. Lindsey Graham said he spoke to McCain Wednesday evening and that McCain said: "Yeah, I'm going to have to stay here a little bit longer, take some treatments. I'll be back."

In a statement on Twitter, his daughter, Meghan McCain, spoke of the shock of the news and the anxiety over what happens next. "My love for my father is boundless and like any daughter I cannot and do not wish to be in a world without him. I have faith that those days remain far away," she said.

As word spread of his diagnosis, presidents past and present along with McCain's current and former Senate colleagues offered support in an outpouring rarely seen in Washington.

"Senator John McCain has always been a fighter. Melania and I send our thoughts and prayers to Senator McCain, Cindy, and their entire family. Get well soon," President Donald Trump said.

Barack Obama, who dashed McCain's dreams of the presidency, said in a tweet: "John McCain is an American hero & one of the bravest fighters I've ever known. Cancer doesn't know what it's up against. Give it hell, John."

McCain has a lifetime of near-death experiences — surviving the July 1967 fire and explosion on the USS Forrestal that killed 134 sailors; flying into power lines in Spain; the October 1967 shoot-down of his Navy aircraft and fall into Truc Bach Lake in Hanoi; and 5 1/2 years in a North Vietnamese prison.

"The Hanoi Hilton couldn't break John McCain's spirit many years ago, so Barbara and I know — with confidence — he and his family will meet this latest battle in his singular life of service with courage and determination," said former President George H.W. Bush.

Politics aside, McCain and Bill Clinton developed a strong friendship, and the former president said: "As he's shown his entire life, don't bet against John McCain. Best wishes to him for a swift recovery."

The junior senator from Arizona, Republican Jeff Flake, said Thursday that McCain told him about his tumor only at the end of a telephone conversation, saying he was "feeling fine, but I might have some chemotherapy in my future." Flake said on ABC's "Good Morning America" that his colleague is "optimistic, obviously. He's John McCain. That's what we'd expect."

In the past, McCain had been treated for melanoma, but a primary tumor is unrelated. Doctors said McCain is recovering from his surgery "amazingly well" and his underlying health is excellent.

With his irascible grin and fighter-pilot moxie, McCain was elected to the Senate from Arizona six times, most recently last year, but twice thwarted in seeking the presidency.

An upstart presidential bid in 2000 didn't last long. Eight years later, he fought back from the brink of defeat to win the GOP nomination, only to be overpowered by Obama. McCain chose a little-known Alaska governor as his running mate in that race, and helped turn Sarah Palin into a national political figure.

After losing to Obama in an electoral landslide, McCain returned to the Senate, determined not to be defined by a failed presidential campaign. And when Republicans took control of the Senate in 2015, McCain embraced his new job as chairman of the powerful Armed Services Committee, eager to play a big role "in defeating the forces of radical Islam that want to destroy America."