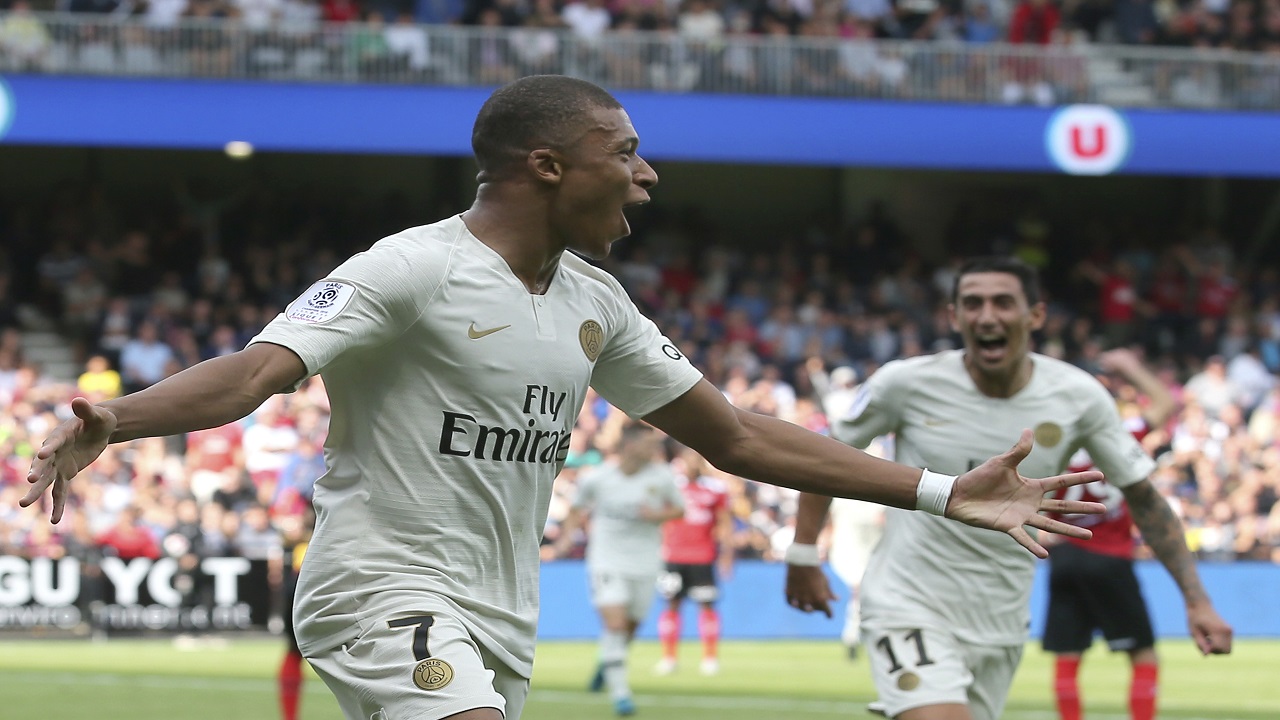 PSG's Kylian Mbappe celebrates after scoring the second goal for his team during their League One football match against Guingampat Roudourou stadium in Guingamp, western France, Saturday, Aug. 18, 2018.

Mbappe came off the bench to score twice in a 3-1 win at Guingamp on Saturday but the victory was overshadowed by a contentious VAR decision in PSG's favor, and a seemingly clear penalty not given to Guingamp with the scores level.

"It's true I added something," Mbappe said. "But the whole team wanted to change things after the first half."

PSG trailed 1-0 at halftime, which could have been 2-0 only for referee Clement Turpin to be alerted by the video assistant referee as to a possible foul in the buildup to a goal. He disallowed the header by midfielder Nicolas Benezet.

Eight minutes later, Neymar's trickery with the ball led to him earning a penalty, which he took himself for 1-1.

But with about 10 minutes left, PSG defender Thomas Meunier clattered into Guingamp winger Marcus Coco as he charged into the area.

Although Meunier sent Coco tumbling heavily, Turpin did not give the penalty and — more surprisingly — VAR officials did not alert him to review the incident.

Two minutes later, the clinical Mbappe put PSG ahead and then finished off Guingamp in the 90th minute.

He curled his first into the bottom corner and deftly chipped the second over the goalkeeper from close range.

But they struggled as Guingamp, a small town in Brittany, dominated the first half.

PSG goalkeeper Gianluigi Buffon made a sensational early save from striker Nolan Roux's close-range shot. Buffon looked beaten as he dived to his left but the 40-year-old Italian showed incredible reflexes to stick out his right hand and push the ball onto the crossbar.

But there was nothing even he could do when Guingamp scored in the 20th minute, with Dagba's mistake leading to Roux's 70th top-flight goal but the first for his new club.

Dagba chested the ball and then, thinking center half partner Thiago Silva was coming across to cover, he hesitated. Coco sprinted into the gap and squared the ball to Roux, who finished neatly.

Buffon was beaten again five minutes later when Coco flicked the ball from the left to Benezet, who headed in. Turpin disallowed the header and went for a video review after being alerted by VAR officials. He disallowed it for an apparent trip by Benezet on Dagba as they contested the ball, although there appeared to be only minimal contact, if any.

Teenagers Weah and Mbappe combined are three years younger than Buffon — who hugged Guingamp striker Marcus Thuram after the game.

Buffon was teammates with his father, the robust defender Lilian Thuram, at Italian side Parma — the city where Marcus was born in 1997.