Mayor Davis presides over the treating of the 5,000 in St James 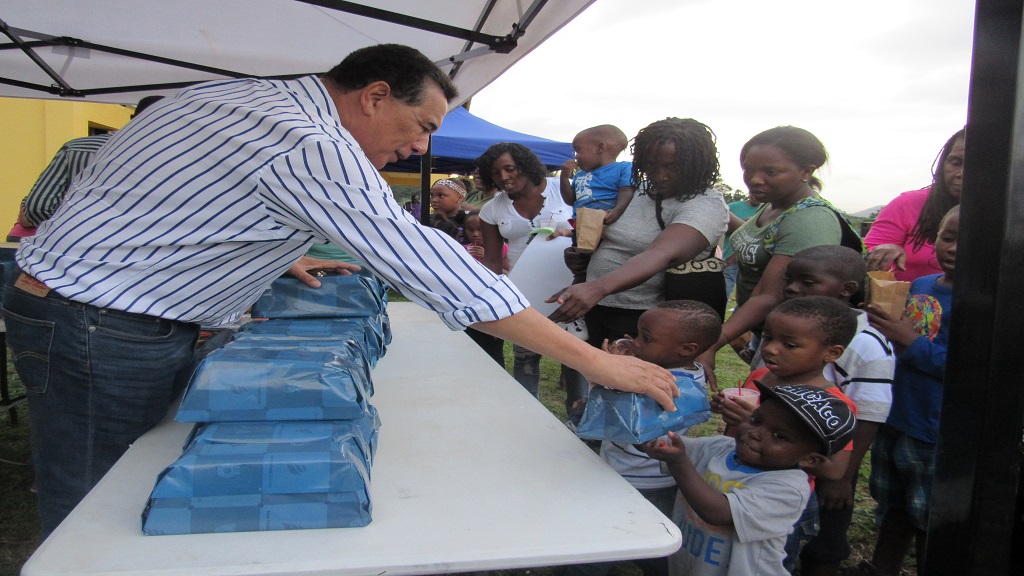 Mayor Homer Davis presents a toy on behalf of New Fortress Energy, to a little boy who attended the Mayor’s Christmas Treat at the Montpellier Showgrounds in St James.

Over 5,000 children were beneficiaries of the Montego Bay Mayor’s Christmas treats across the parish of St James over the Yuletide season.

Additionally, hundreds of senior citizens and shut-ins were presented with care packages.

Dinner was also provided for the homeless in downtown Montego Bay.

Montego Bay Mayor, Homer Davis, had pledged to patrons at the 2018 Mayor’s Charity Ball in the city on December 1 that he would bring joy to thousands of children in the parish.

Financial support for the hosting of the mayor’s Christmas treats across the five constituencies in St James came out of a very successful second staging of the Mayor’s Charity Ball on the lawns of the Rose Hall Great House in the parish.

In addition, first time sponsors of the annual St James Municipal Christmas Tree Lighting ceremony, New Fortress Energy, donated hundreds of toys which were distributed among children across the parish.

Davis said he was happy that through the support for the Mayor’s Charity Ball and from New Fortress Energy, he was able to bring Christmas cheer to so many children, elderly citizens and homeless persons.

“I am very pleased that through the generosity of forward-thinking and philanthropic Jamaicans, as well as New Fortress Energy, we were able to deliver on a promise to treat these children and elderly citizens. The response from all the treats staged across the five constituencies was overwhelming. We had children who, without prompting from anyone, came up to express appreciation and thanks for the gifts which we presented. This has given us a very heartwarming experience, which is enough encouragement to do this again come 2019,” Mayor Davis said.