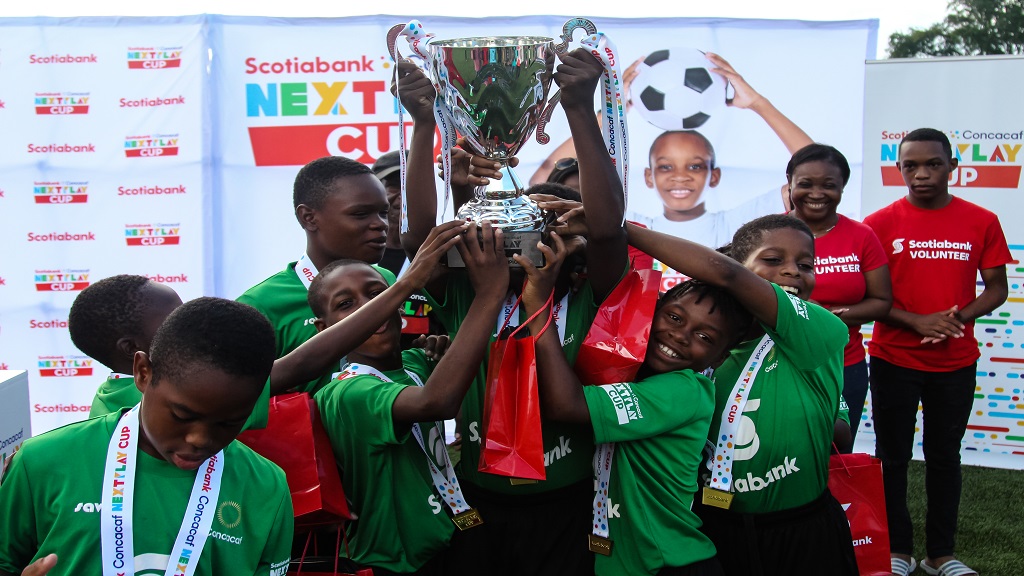 Members of May Pen Primary football team celebrate with the NextPlay Cup after beating Holland Primary 3-1 on penalties in the Jamaica leg of the the 2019 Scotiabank Concacaf NextPlay Cup final at the UWI/JFF Captain Horace Burrell Centre of Excellence on Saturday, December 7, 2019.

Goalkeeper Lennox Francis was the hero after he saved the first three Holland Primary spot kicks in a penalty shootout as May Pen Primary were crowned champions of the Jamaica leg in the 2019 Scotiabank Concacaf NextPlay Cup with a 3-1 victory on penalties in the final at the UWI/JFF Captain Horace Burrell Centre of Excellence on Saturday.

The dreaded penalty kicks were used to decide the winner after a tight game, which ended 1-1 after regulation time with few clear cut chances created. May Pen Primary had taken a 1-0 lead into the half-time break, but Holland Primary equalised following a lengthy break as a result of heavy rain accompanied by lightning.

But the day truly belonged goalkeeper Francis after his heroics from the spot as a new champion was crowned.

May Pen Primary had earlier knocked out Holy Family Primary, which won the competition in its inaugural year in 2018. 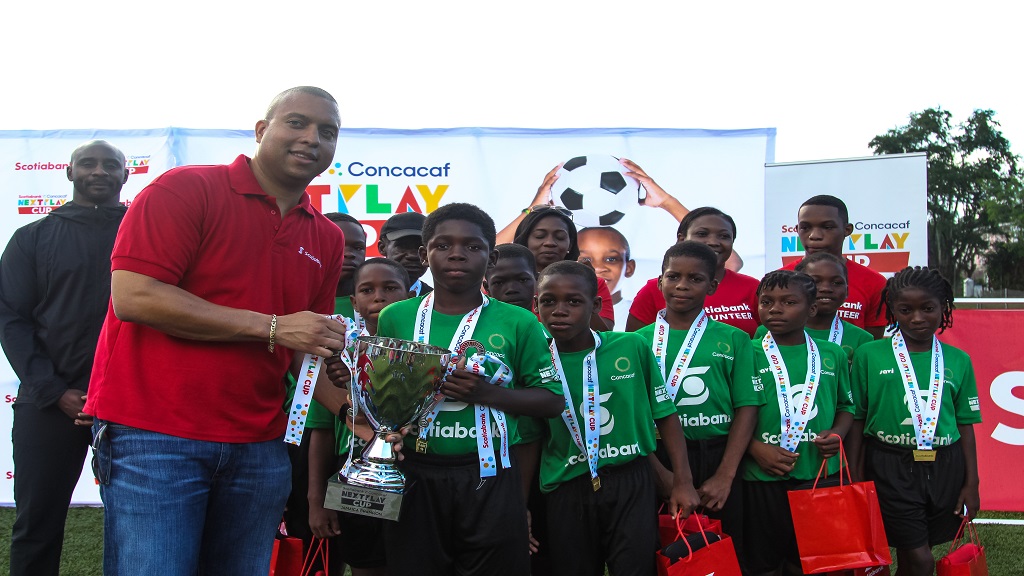 Perrin Gayle (left), Scotiabank's senior vice-president of corporate and commercial banking, presents the NextPlay Cup to the May Pen Primary team. Concacaf director of development Jason Roberts is at left.

There was a slight change to the competition’s format on the final day that was expected to feature quarter-finals, semi-finals and the final. Instead, the eight teams that advanced to the final day after two Saturdays of preliminary round were placed in two groups of four teams each. At the end of round robin play in each group, the two group winners contested the championship match.

May Pen Primary and Holland Primary came out of their respective groups with maximum nine points.

On their way to the championship match, May Pen Primary had defeated Holy Family Primary 1-0 in the second round of matches on the day. That defeat eliminated the defending champions as at that stage they were on a points from two games, while the victory pushed May Pen Primary to an unassailable six points heading into the final set of group matches.

Captain Rowanie Rampasaud, who scored for May Pen Primary in regulation time, missed from the spot in the penalty shootout, goalkeeper Francis, Devon Shaw and Ricardo LaTouche were the players on target for the new champion.

The NextPlay Cup is a primary school initiative by Scotiabank and Concacaf, which uses football as a vehicle to make a positive impact on children’s lives in four Concacaf Member Association countries - the Bahamas, Barbados, Jamaica and Trinidad and Tobago. It is confined to  boys and girls aged 10-11 years old playing on the same team.

Each country fielded 56 school teams, with 10 players, participating in 7x7 format between urban and rural regions.

It aims, not only to expose the boys and girls  to the game, but targets the wholesome development of the children through the primary school system in the participating countries. NextPlay takes aim critically at helping the kids in character building and to ensure that key life values are passed on to them at their impressionable years.

Following the completing on the Jamaica leg, Yanique Forbes Patrick, director of public affairs and communications, Scotiabank (English Caribbean), said the bank was proud of the programme.

“It has been a good programme and we are happy and proud of what we have seen and I think we accomplish what we set out to do here today," said Forbes Patrick.

Concacaf director of development Jason Roberts and  Howard McIntosh were  among the senior members of the confederation who watched the final day of the Jamaica leg.

Forbes Patrick also stated that “we had a programme that consisted of training academy and we went and we visited the schools at the training academy and it was really good to see them, and especially the girls getting technical training in football and having fun and learning all the social skills that we hoped they would learn.

“And then we have a good day today. Did you see all the passion of football, you see the sweet taste of victory for some and others are learning to lose gracefully and that is also important. Honestly, I think we have accomplished what we wanted to do with the programme and we are very happy.”