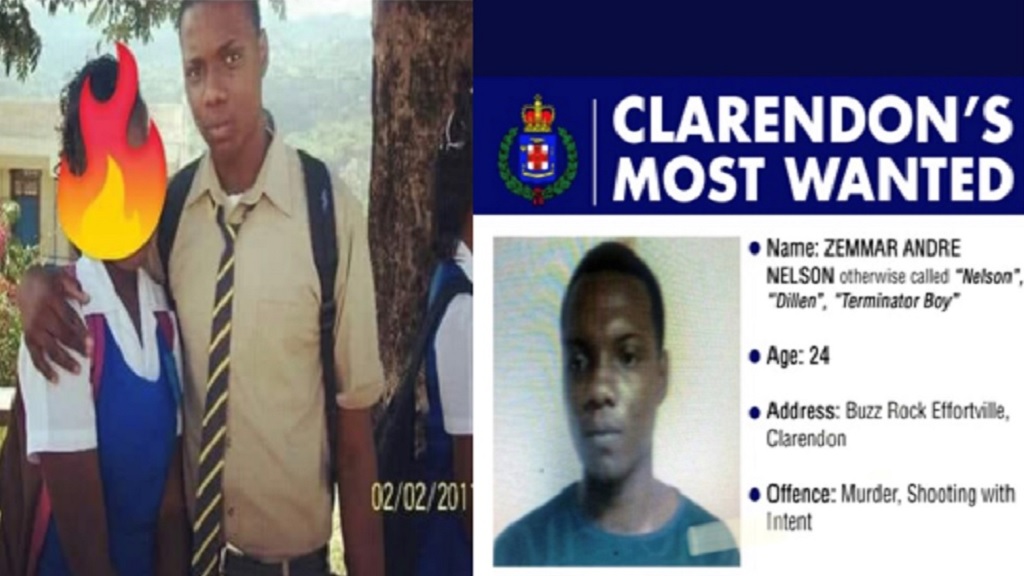 Combination of photos showing Zemmar Nelson as a student in high school and as a wanted man.

A woman who claims to be a childhood friend of Zemmar Nelson, one of six men gunned down Sunday by members of the security forces, is bemoaning the fate of a man she said once appeared to have a bright future.

The 24-year-old Nelson, aka ‘Terminator Boy’, was one of Clarendon’s most wanted, and had been on the police radar for murder and shooting with intent.

However, years before he gained notoriety in Clarendon for gunslinging, Nelson was allegedly a standout student in mathematics at one of the parish’s top learning institutions, Clarendon College.

“I know a lot of people won’t say RIP because behind the bad they don’t know the good,” the woman said in a post to social media. “I will pay respects to you… to the Zemmar I knew… to the boy who taught me maths in high school, who taught me accounts.”

In the heartfelt post, she went on to suggest that inadequate guidance as a child led to Nelson choosing a life of crime.

“No one knows the life you went through as a kid and I am happy you confided in me to tell me your story. While I am sad you chose the wrong road to go down, I wish you had the chance to go to college; I wish you had better guidance because you had such a brain on you that even our teachers know about,” she said.

The post has been liked by dozens of people but it has also sparked backlash against the woman.

At least two persons accused the woman of protecting a criminal.

“She was part of the problem. She knew he was a wanted man and did not do anything to help the problem. Maybe if you report him he would be in jail and not dead,” one person charged.

Another person added, “Women like these are part of the problem - you all shielding these thugs for what?”

Nelson and five other men were shot and killed by members of the security forces in Effortville, May Pen, Clarendon on Sunday morning.

The men were cut down during a joint police/military operation in the volatile community that involved a shootout which lasted for about an hour, law enforcement sources indicated.

Only two of the deceased have so far been identified – Nelson and 25-year-old Leon Rose, otherwise called ‘Hitler’, who was also on the Clarendon’s most wanted list.