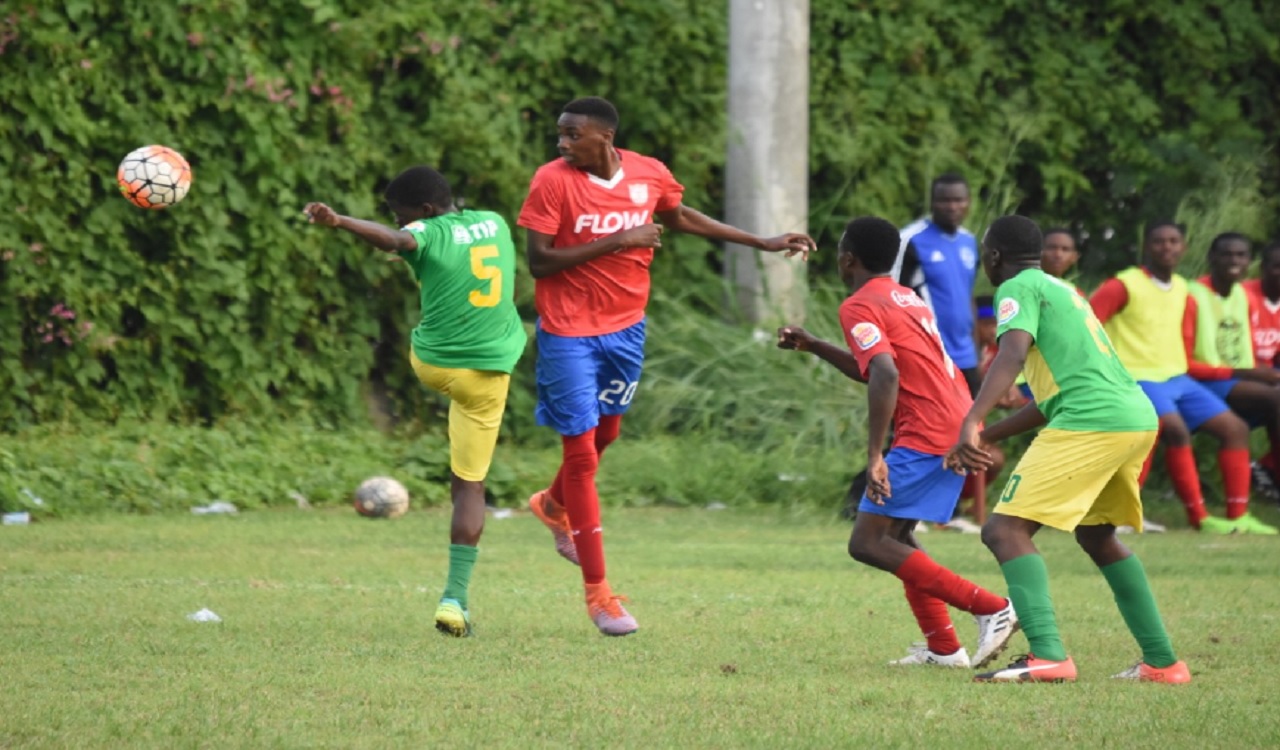 substitute Damion Herrera (left) of St Jago High takes a shot during the Group F top-of-the-table ISSA/FLOW Manning Cup match against Holy Trinity at the Bell Chung Oval on Tuesday. The match ended in a 1-1 draw.

Holy Trinity's advancement to the second round of the 2017 ISSA/FLOW Manning Cup was delayed on Tuesday, after they were held to a 1-1 draw by St Jago High in their Group F top-of-the-table return leg game at the Bell Chung Oval.

In the first game between the teams on September 11 Holy Trinity won 3-2 at Prison Oval in Spanish Town.

Needing a win to advance to the second round on Tuesday, substitute Nicholas Thomas found the back of the net in the 67th minute but with two minutes away from their spot in the second round, Andre Thomas equalised for St Jago.

Despite the result, Holy Trinity remained atop the standings in Group F with three matches to go. They moved to 19 points, a seven-point lead over second-place Clan Carthy High, who defeated Edith Dalton 3-0.

St  Jago dropped to third spot on 11 points and are still in the race for a second round spot. They have another four matches remaining, one more than Holy Trinity and Clan Carthy.

The match was more of a tactical one with, St Jago despite starting eight points behind, matching Holy Trinity for most of it.

The game had very few clear chances, with action mainly in the middle.

Holy Trinity went ahead from a quick break on the right, before a cross by another substitute Dillon McEnnis found Thomas just outside the 18-yard box,  centre of goal. He powered a shot to the right of goalkeeper Diandre Burrell, just inside the left upright.

With Holy Trinity looking at victory, a handled ball inside the area, gave St Jago the opportunity to level the scores. Thomas's first attempt was partially blocked by goalkeeper Antonio Millington and rolled into the goal, but was called back after St Jago players encroached.

Thomas slotted to the left of Millington the second time.

The result ended the perfect win record of Holy Trinity.

Meanwhile, Group D leaders St George's College stretched their perfect win record to seven straight victories with a 3-0 triumph at Tarrant High to virtually cement their spot in the second round. They now need at least a point from to cement their second round spot.

With three matches remaining in the group, St George's College have moved to maximum 21 points, a five-point lead over second-place St Catherine High, who won 2-0 at Denham Town High. Kingston Technical High School edged Vauxhall 1-0 to remain in third place on 12 points and still in the race for a spot in the second round.

Only two schools have already secured their spots in the second round. They are Kingston College (KC) and Excelsior High from Zone E.

KC qualified on September 29 after hammering Ardenne High 8-2, while Excelsior High achieved qualification on Monday with a 1-0 victory over Greater Portmore High.