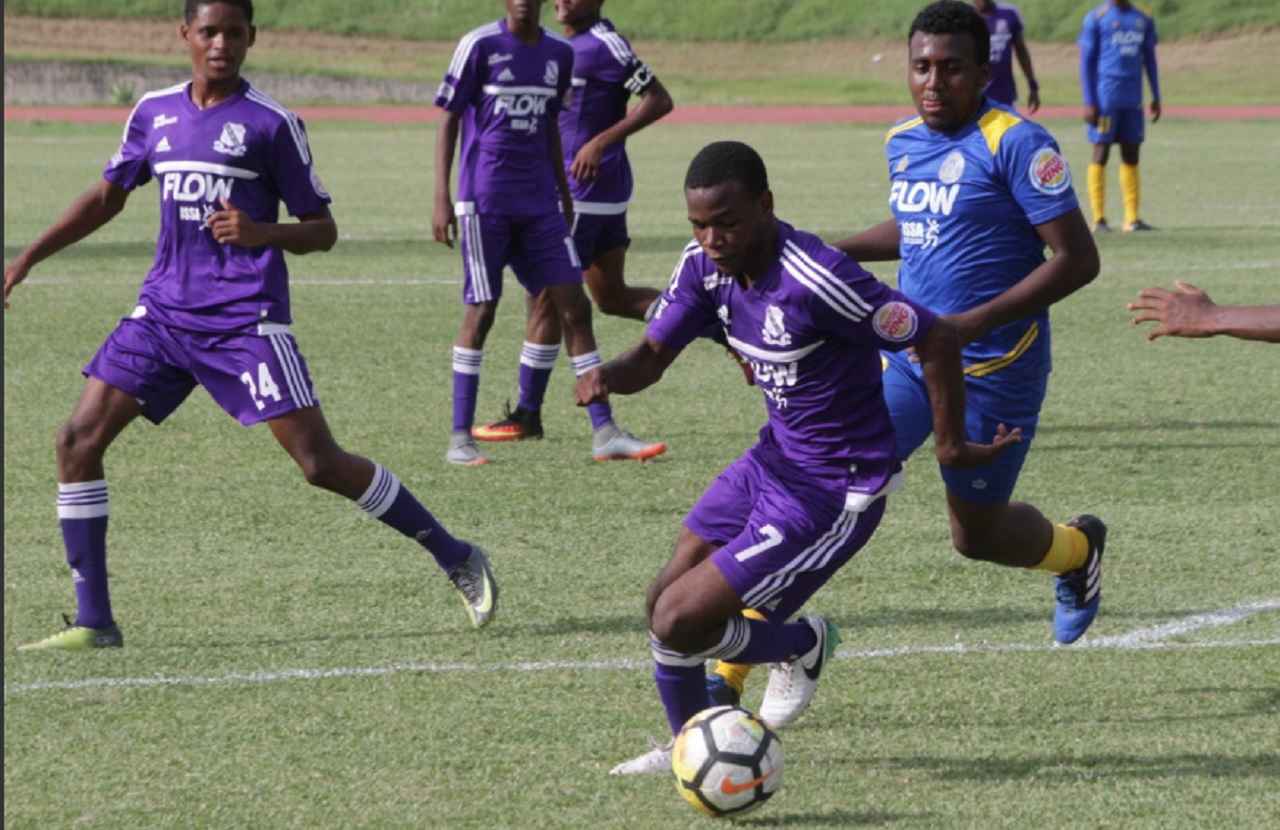 Action from the ISSA/FLOW Manning Cup Group E match between Kingston College and Ardenne at the Stadium East field on Friday.

Kingston College (KC) became the first team to qualify for the second round of the 2017 ISSA/FLOW Manning Cup competition  when they after hammered Ardenne 8-2 in their return leg fixture at the Stadium East field.

The win means that KC completed a 20-3 victory over the two legs as they won 12-1 at Ardenne on September 12.

On Friday, KC again won without exerting much energy, through goals by Trey Bennett in the 14th minute, Omar Thompson in the 21st, Teyvon Reid in the 29th, Shamar Bloomfield in the 45th,  Horace Ramsey in the 55th, substitute Cory Smith in the 66th and 85th and Anthoniel Mullings in the 70th.

Ardenne's goals were scored by Curtis Henry in the 43rd and a penalty by Charles Tate one minute into added time.

They are now on maximum 21 points from seven games, and can only be passed by Group E's second-place team Excelsior (16 points), who recorded the day's biggest victory by beating Norman Manley 10-0.

KC controlled the action for most of the match, which was played mainly around Ardenne's 18-yard box.

The smooth Stadium East surface helped KC's  passing game, as they rendered to a limited amount of counter attacks, one of which they scored from.

KC scored at will aided by poor defending by Ardenne, for whom goalkeeper Ossain Martinez was the best player on the pitch, as he limited the scoring with some excellent saves.

The scoring was also minimised by a few faulty finishing by KC, as they also failed to convert some easy chances.

Meanwhile, Charlie Smith Comprehensive ended the perfect win record of Calabar High with a 2-0 victory at the the Anthony Spaulding Sports Complex in a Group G top-of-the-table clash.

It was sweet revenge for Charlie Smith, who had lost 3-1 on September 12.

With the victory, Charlie Smith moved atop Group courtesy of goal difference over Calabar. Both schools are on 18 points, three ahead of third place Eltham High, who defeated Cedar Grove 5-1.

Over in Group A, Haile Selassie High handed Wolmer's Boys their first defeat with an away 2-1 victory.

Despite the defeat, the Wolmerians remained atop the standings with 16 points, one ahead of second place Tivoli High, who edged Pembroke Hall 2-1.

Haile Selassie High remained in third place on 13 points and still in the race for a spot in the second round.

MANNING CUP: KC look a safe bet to qualify for second round today