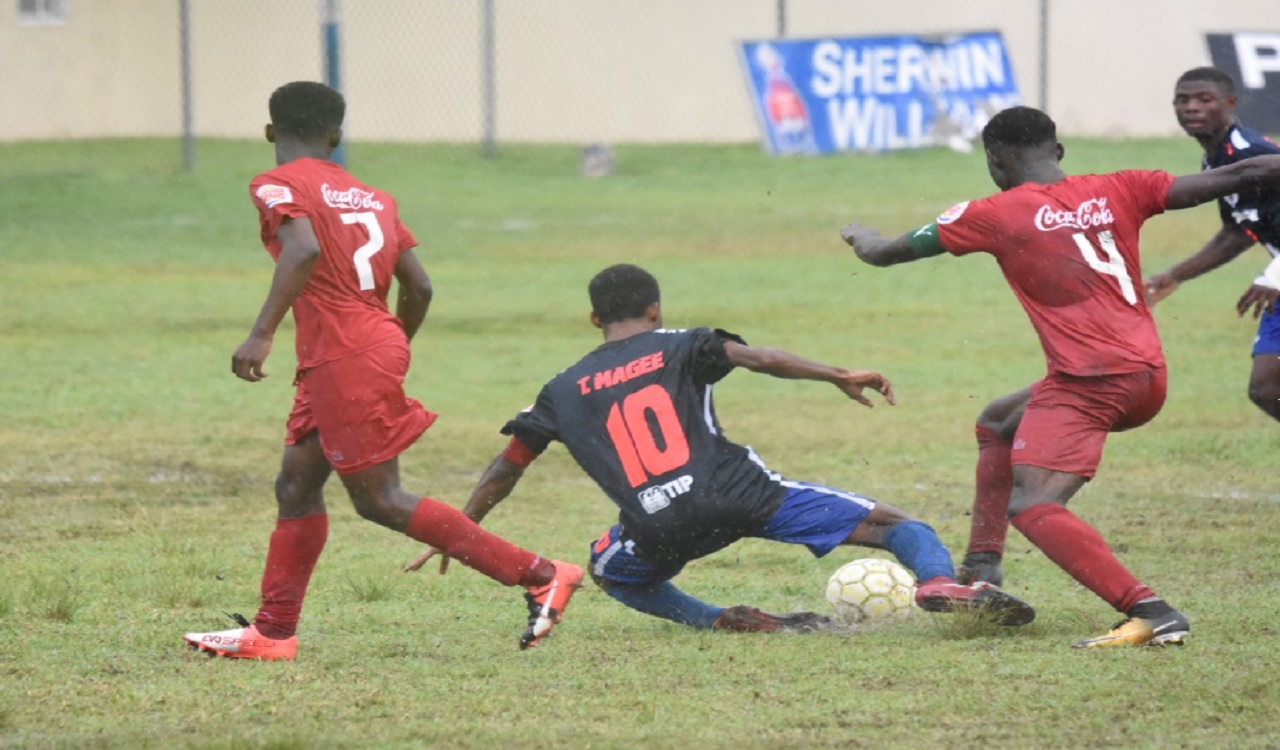 Action from the ISSA/FLOW Group B Manning Cup game between hosts Jamaica College (JC) and Bridgeport High on Monday. The game ended in a 2-2 draw.

The hunt for second round spots in the 2017 ISSA/FLOW Manning Cup football competition continues on Friday with the focus on Group B, where four of the six schools are still in the hunt for the two automatic places.

Six second round spots are up for grab.

Among the four schools in contention for the two automatic spots from Group B is defending champions Jamaica College (JC), who are in second-place - just two points behind leaders St Andrew Technical High School (STATHS).

Bridgeport High hold down third place courtesy of goal difference over fourth-place Mona High. Both are on 13 points in a group where five points separate the top four teams with two matches remaining.

JC will host bottom-pace Donald Quarrie,  a team they hammered 9-0 on September 23; while STATHS will entertain Mona High, who they edged 2-1, also on September 23.

A victory for STATHS over Mona High will qualify them for the second round; while JC need to beat Donald Quarrie and hope that Bridgeport High drop points against Papine High in their match at Dumbleholden.

The two qualifiers from Group A could also be decided on Friday. Three teams are fighting for the two spots - leaders Wolmer's Boys on 19 points, second-place Tivoli High on 18 points and third-place Haile Selassie High on 14.

Wolmer's Boys will travel to Chedwin Park to face bottom-place Innswood High; while Tivoli High and Haile Selassie High will face off at the Edward Seaga Sports Complex.

Wolmer's High and Tivoli High will secure the two automatic sports with victories.

Wolmer's Boys came away with a 2-1 victory over Innswood High when they met at Heroes Circle on September 23, while also on that day Tivoli and Haile Selassie High battled to a 0-0 draw.

The two automatic qualifiers from Group G could also be decided on the day. Three teams are also fighting for those spots with two matches to go. They are leaders Calabar High on 21 points, second-place Charlie Smith on 19 and third-place Eltham High on 16.

Calabar High only need a point against Eltham High to qualify, while Charlie Smith need a victory to book their spot.

Over in Group E, Kingston College (KC), one of three teams with a perfect win record, and Excelsior have already secured the two automatic spots

The two teams will face off for group honours.

KC enter the match with maximum 24 points, a five-point lead over Excelsior. KC, who beat Excelsior 3-1 in their first meeting on September 23,  only need a point to win the group with one game to come.

FRIDAY'S MATCHES (ALL SCHEDULED TO BEGIN AT 3:30 PM)

DACOSTA CUP MATCHES FOR FRIDAY (ALL START AT 3:30 PM)