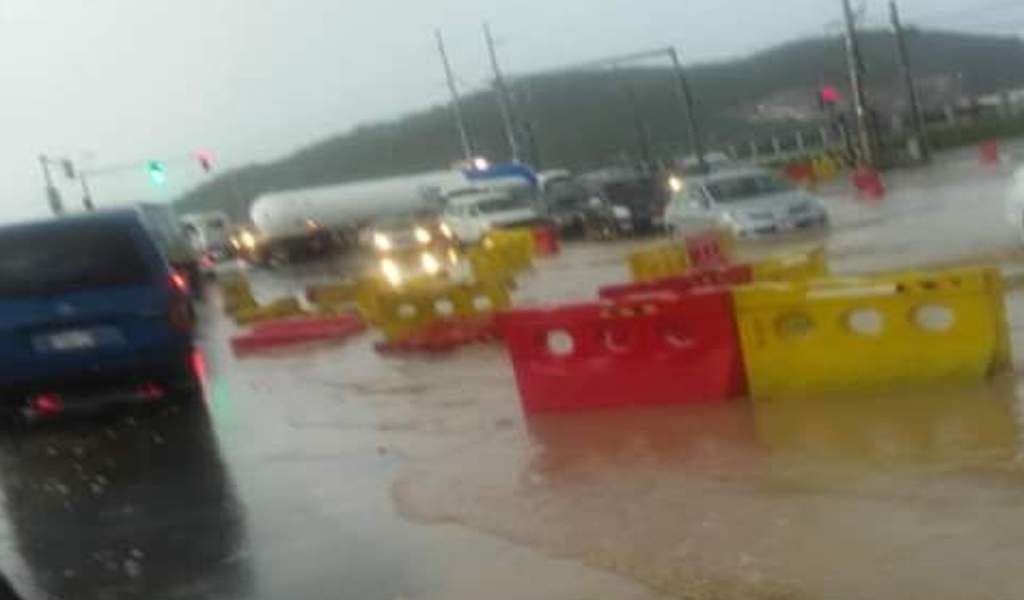 A section of the flooded Mandela Highway on Monday.

The overflowing Duhaney River in St Andrew has flooded sections of the Mandela Highway, reducing the busy thoroughfare to single lane traffic in both directions. The police are recommending that only heavy vehicles attempt to use the lane heading into Kingston.

Unsuspecting motorists were caught off guard Monday afternoon following a quick downpour which caused the river to overflow its banks, in the process transforming sections of the highway, where major improvement work is taking place, into a lake.

As a result, the police are urging motorists who normally travel along the Mandela Highway to use alternative routes such as the Dyke Road, the Portmore toll road and Marcus Garvey Drive. Otherwise, motorists are being urged to proceed with caution and exercise patience.

Two motorists who were travelling towards Portmore from Spanish Town Road and Duhaney Park told Loop News that they were surprised by the fast-rising waters as soon as their vehicles reached the area where construction work is taking place.

“It felt like the car was swimming. I thought we would have to abandon the vehicle,” said Yvonne Simpson, who is visiting from overseas.

"I was really frightened," she added.

The driver of a Nissan Tiida motor car, who has lived in the nearby Duhaney Park community for more than 30 years, told Loop News that he "barely made it through the water”.

He said, “The Chinese dem don’t know anything about Duhaney River.

"They can’t control that river,” he added in reference to the roadwork in the area being undertaken by China Harbour Engineering Company.

Loop News has not ascertained whether the roadwork in the area caused the river to burst its banks. However, some motorists have said they have never seen such extensive flooding in that vicinity.

The police are reporting that heavy equipment is now being used to clear the roadway.