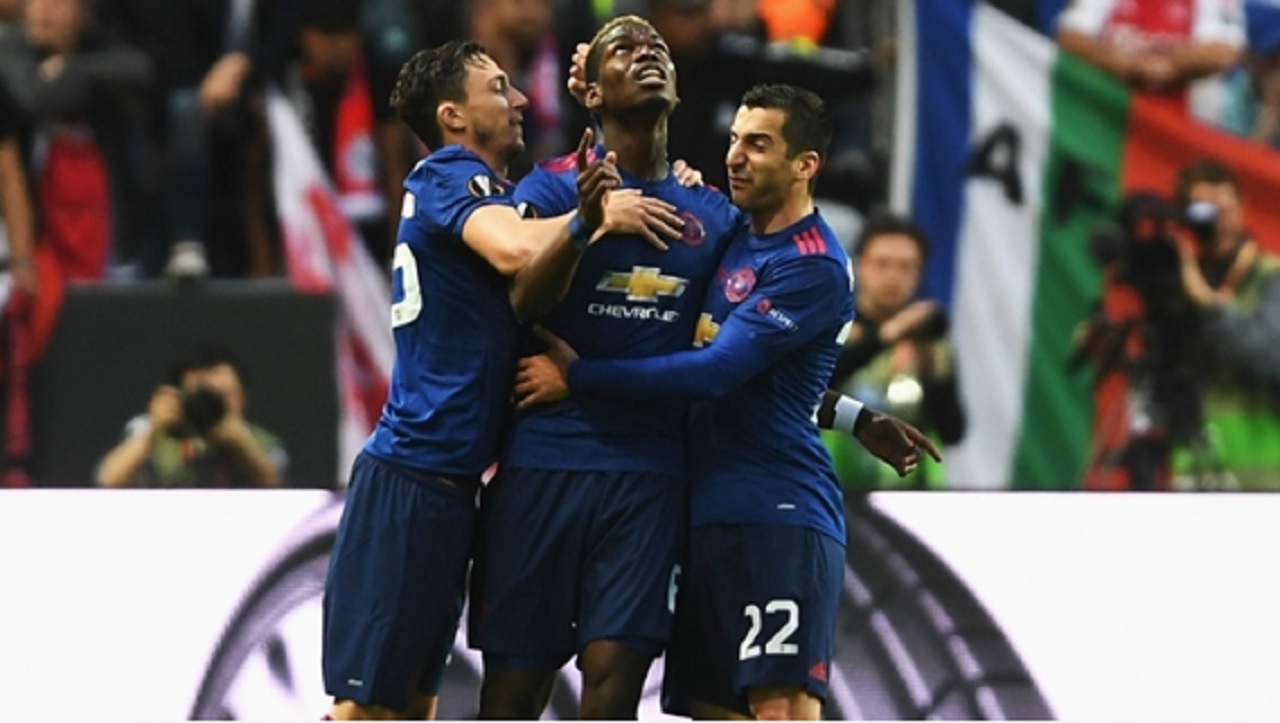 Manchester United won the Europa League for the first time in their history thanks to a 2-0 victory over Ajax in Wednesday's final in Stockholm.

Goals from Paul Pogba and Henrikh Mkhitaryan secured the trophy and a route back into the Champions League group stage for next season, while bringing some joy to fans in what has been a deeply difficult week for the English city.

The match was overshadowed by Monday's terror attack at the Manchester Arena, which killed 22 people, and a minute's silence was observed before kick-off in front of a boisterous but respectful crowd at Friends Arena.

Manager Jose Mourinho – who last won this trophy with Porto in 2003 –  spoke before the game of how United players were struggling to put the tragedy at home out of their minds, but they were the better side in the opening exchanges and were good value for the lead given to them through Pogba's deflected shot.

Ajax, in their first European final since losing to Juventus in the Champions League in 1996, lacked the attacking precision that saw them score five goals across two legs against both Schalke and Lyon and they were 2-0 down shortly after the interval as Mkhitaryan netted his sixth goal in the competition this season.

United were largely on the defensive in the final half-hour but their lead was rarely under threat, as they became the fifth team to win the Champions League, Europa League and UEFA Super Cup and returned to Europe's top table in style.

Wednesday's encounter was preceded by a minute's silence that turned into rousing applause in recognition of the victims of Monday's terror attack in Manchester, which claimed the lives of 22 people.

It was United who settled quickest, Marcus Rashford causing some early problems for the young Ajax back line and Marouane Fellaini almost reaching a fizzing cross from Juan Mata.

Chelsea loanee Bertrand Traore stung the palms of Sergio Romero, starting as expected in place of David de Gea, but Ajax's early anxiety came to a head as they gifted United the opener after 18 minutes.

United won the ball back from a routine Ajax throw-in and it allowed Fellaini to tee up Pogba on the edge of the area, who had time to take a touch before firing a left-footed shot that took a big deflection off Davinson Sanchez and looped beyond Andre Onana.

Antonio Valencia saw a powerful strike beaten away by Onana but United gradually began to sit deep as Ajax grew into the contest, although they struggled to create any meaningful openings before the break.

And with two minutes played of the second half, they were hit by a United sucker punch. Daley Blind's inswinging corner was headed down by Chris Smalling, and Mkhitaryan – perhaps fortunate to have been left on after a dreadful first-half display – hooked the ball into the roof of the net.

Peter Bosz replaced the anoymous Kasper Dolberg as he sought to give Ajax some much-needed attacking vigour but United wasted a great opening to settle the contest, Fellaini heading straight at Onana after being picked out by Pogba.

Ajax continued to enjoy close to 69 per cent of possession but they offered almost no threat to Romero's goal, as a season in which they surrendered their Eredivisie title to Feyenoord ended in more disappointment.

For EFL Cup winners United – who gave a late run-out to captain Wayne Rooney in what could be his final match for the club –  it was a largely routine but profoundly welcome success that cast a more favourable light on Mourinho's first term in charge and provided a fitting tribute to those grieving at home.