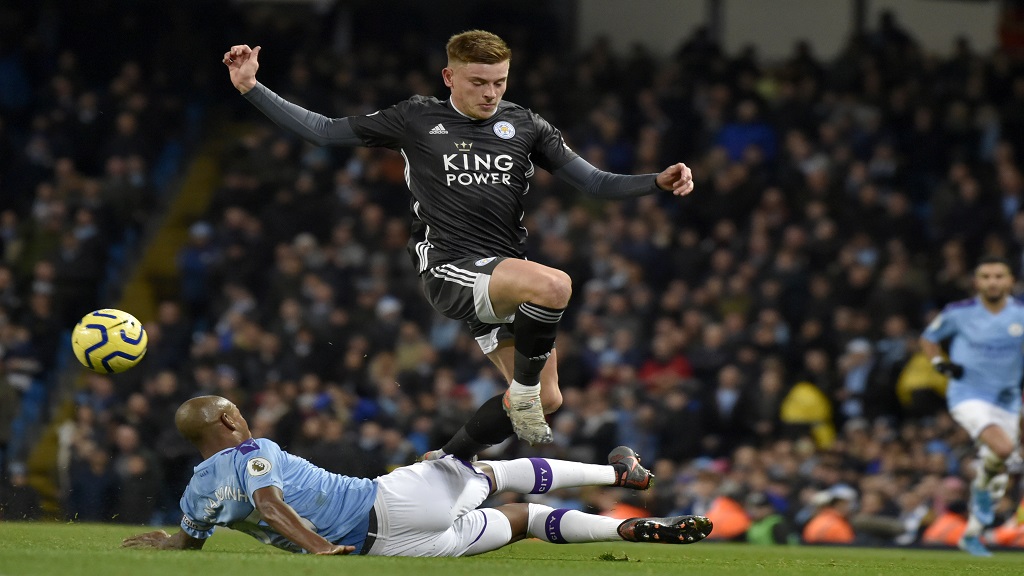 Manchester City came from behind to win 3-1 at home to Leicester City in a vital victory for their slim Premier League title hopes.

Leicester took the lead at the Etihad Stadium on Saturday through Jamie Vardy's 17th Premier League goal of the season.

But champions City showed grit and determination despite Leicester's threat on the counter-attack and Riyad Mahrez equalised against his old club with a deflected drive.

Raheem Sterling won a penalty that Ilkay Gundogan converted and Gabriel Jesus struck after the break to move City within a point of their second-placed visitors, who remain 10 behind leaders Liverpool.

Kevin De Bruyne was outstanding against Arsenal last time out and his low 20-yard drive rattled the outside of the post with Kasper Schmeichel scrambling, but it was Leicester who took the lead with their first shot in the 22nd minute.

Harvey Barnes sent Vardy free down the left channel and he burst away from Fernandinho with ease before expertly lifting a deft finish over the onrushing Ederson.

Mahrez had been giving Ben Chilwell a tough time and, after he beat the full-back again, the former Foxes star's shot flew past Schmeichel, clipping the unlucky Caglar Soyuncu on its way in.

City were ahead by the interval, Ricardo Pereira clumsily bringing down Sterling with Gundogan squeezing his low penalty past Schmeichel despite the goalkeeper getting a hand to the kick, though Ederson had to deny James Maddison on the stroke of half-time.

Mahrez missed two clear chances to extend City's lead early in the second half before De Bruyne tried to set up Jesus when he had Schmeichel's goal at his mercy.

Leicester continued to post a threat on the break, Barnes failing to convert a Vardy centre, but Schmeichel had to make a brilliant save to keep out another Mahrez effort.

City clinched it in the 69th minute, De Bruyne – who later went off with apparent cramp to be replaced by the returning Sergio Aguero – evading Soyuncu to cross for Jesus to tap in, and they may yet exert pressure on Liverpool during the second half of the season.

What does it mean? Champions' defence not over yet

Liverpool will have to suffer a serious slip-up to miss out on their first title of the Premier League era, but Pep Guardiola's side are not out of contention just yet.

Leicester had emerged as the Reds' nearest challengers this term but City, who have won four in a row in all competitions since losing the Manchester derby, are building momentum again though they may be concerned about Gundogan's late injury.

Consistency has been an issue for Mahrez since he joined City from Leicester but he showed his former club what they are missing with a performance of style combined with end product.

Mahrez arguably should have scored more than his one fortuitous goal but Leicester could not cope with the Algeria winger.

Jonny Evans had a fine game at the heart of Leicester's defence but full-backs Pereira and Chilwell – who has consistently been linked with a move to the Etihad Stadium – had days to forget.

England international Chilwell was given the runaround by Mahrez while Pereira got in a poor position against Sterling to concede a decisive penalty.

Leicester have another huge game on December 26 when they host leaders Liverpool. The following day sees Guardiola's men in action away to Wolves.

EPL: Almiron off the mark, Everton and Arsenal play out bore draw