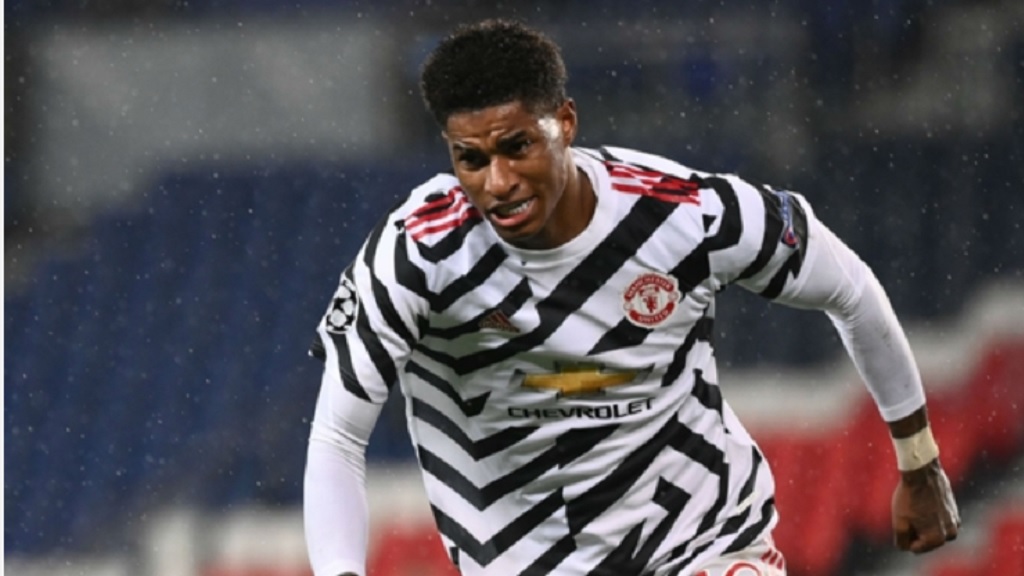 Marcus Rashford sprinted toward the corner flag inside an empty Parc des Princes and slid on his knees in celebration, just like two seasons ago.

Another trip to Paris Saint-Germain (PSG) in the Champions League. Another late winner for the Manchester United striker.

In a heavyweight contest on the opening night of the group stage, United reproduced their stunning exploits from the 2018-19 competition by beating PSG away thanks to Rashford's 87th-minute strike in a 2-1 win on Tuesday.

It was an eerily similar scenario to 18 months ago when United arrived in the French capital heavily depleted and 2-0 down from the first leg of the teams' last-16 match. It was Rashford who clinched an unlikely 3-1 win — and progress to the quarterfinals — with a stoppage-time penalty.

PSG, last season's beaten finalist, already has work to do if the Qatar-owned team is to realise its long-held ambition of being European champion for the first time.

Lionel Messi's Barcelona and Cristiano Ronaldo's Juventus are up and running already, though.

Messi scored a penalty to set Barca on their way to a 5-1 win over Hungarian outsider Ferencváros as the Spanish team began the rebuild of its reputation in Europe's elite competition, two months after an embarrassing 8-2 loss to Bayern Munich in the quarterfinals last season.

Ronaldo was missing for Juventus after testing positive for the coronavirus last week, but the Italian champion had a worthy replacement in Alvaro Morata as the striker scored twice in a 2-0 win at Dynamo Kyiv.

There were wins for Lazio, Leipzig, and Club Brugge, while Chelsea and Sevilla drew 0-0 and two group-stage newcomers — Rennes and Krasnodar — drew 1-1.

There were no fans at the Parc des Princes, one of three stadiums — along with Barcelona's Camp Nou and Chelsea's Stamford Bridge — to be without spectators for the return of the Champions League because of the coronavirus.

A sluggish PSG certainly could have done with some backing from their supporters, with United proving more than a match for the home team despite having a makeshift centre-back pairing of Axel Tuanzebe and Victor Lindelof while Paul Pogba started on the bench.

United went ahead through midfielder Bruno Fernandes’ twice-taken penalty midway through the first half but conceded when Anthony Martial rose to clear Neymar’s corner from the left, only to glance a header past his own goalkeeper, David de Gea, in the 55th.

Rashford had already been denied by PSG goalkeeper Keylor Navas when he collected a pass from Pogba and smashed a low, angled shot inside the far post from the edge of the penalty area.

In the other game in Group H, Leipzig — a surprise semifinalist last season — beat Istanbul Basaksehir 2-0 in front of just under 1,000 fans thanks to two first-half goals by Spanish defender Angeliño.

Messi now has 116 goals in the Champions League and extended his run of scoring at least one goal in the competition in 16 consecutive seasons.

It was also a special night for two players nearly half his age, with 17-year-olds Ansu Fati and Pedri also scoring for Barcelona against Ferencváros — a club making its first appearance in the group stage in 25 years.

Philippe Coutinho and Ousmane Dembélé were the other scorers for Barcelona, which lost defender Gerard Piqué to a straight red card with about 20 minutes left. Ihor Kharatin scored Ferencváros’ lone goal from the resulting penalty.

Messi and Ronaldo — two players who have been at the top of the world game for more than a decade — are in the same Champions League group for the first time and are set to meet next week when Juventus host Barca.

Juventus coped well without Ronaldo in Kyiv, with Morata — a recent arrival from Atlético Madrid on loan — scoring twice in the second half.

US national team goalkeeper Ethan Horvath is one of a record 10 Americans eligible for the group stage with various clubs. He didn't get off to the best of starts.

Horvath, who play for Brugge, was credited with an own-goal against Zenit after a shot by Dejan Lovren hit the post and bounced in off the back of the diving goalkeeper.

Brugge grabbed a stoppage-time winner from Charles De Ketelaere, though, and join Lazio on three points in Group F.

The Italian team, which is playing in the Champions League group stage for the first time in 13 years, beat Borussia Dortmund 3-1 through goals by Ciro Immobile and Jean-Daniel Akpa-Akpro as well as an own-goal by Dortmund goalkeeper Marwin Hitz.

In Group E, all four teams are on one point. Chelsea finally got their six major summer signings on the field together but couldn’t find a way past stubborn Sevilla.

Rennes took the lead against Krasnodar through striker Serhou Guirassy's penalty in the 56th but conceded three minutes later when left-back Cristian Ramirez’s long-distance strike beat goalkeeper Alfred Gomis at the near post.