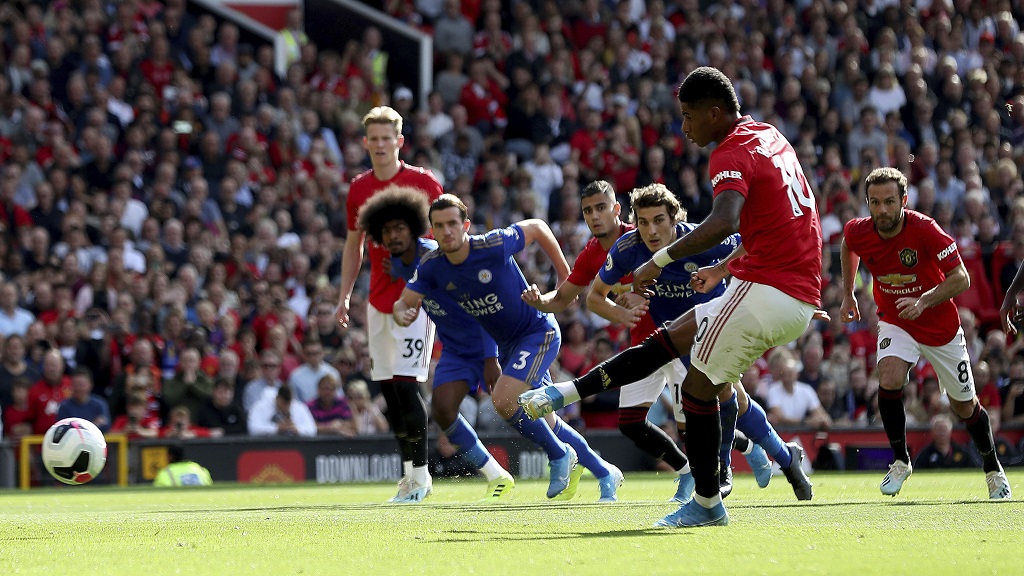 Marcus Rashford's penalty was enough to give Manchester United a 1-0 Premier League victory over Leicester City on Saturday.

The England striker, who missed from 12 yards in the 2-1 loss to Crystal Palace last month, made no mistake this time at Old Trafford as United ended a three-game winless league run.

Leicester had only beaten the Red Devils once in 20 attempts prior to this encounter, but an unbeaten start to 2019-20 saw them arrive in confident mood and they forced David de Gea into one or two important saves.

Brendan Rodgers' side could not turn possession into regular meaningful chances, though, as Harry Maguire produced an accomplished display against his old club to help United to three points.

United's bright start yielded a breakthrough eight minutes in, Rashford dispatching a confident penalty after he had been barged over by Caglar Soyuncu.

An earlier save by De Gea from James Maddison offered a glimpse of Leicester's threat, and Ben Chilwell brought another good stop out of the United goalkeeper with a half-volley.

Leicester grew into the game but found it difficult to create openings, and United twice came close just after half-time through Juan Mata and Daniel James.

James wasted another decent opening after good work from substitute Fred, before Rashford's dipping free-kick clipped the woodwork, but it counted for little as United saw out just a second win in their last six home games.

What does it mean? United survive stern test to go fourth

Given Leicester's recent form and United's injury problems, this was always likely to be a tough examination for Ole Gunnar Solskjaer's side.

However, despite missing Paul Pogba, Luke Shaw, Jesse Lingard and Anthony Martial, this was an accomplished enough team performance that got United back to winning ways at the start of a hectic period of the season.

They move above Leicester on goal difference into fourth in the table, seven points behind leaders Liverpool.

There was plenty of pressure on Scott McTominay to make up for the missing Pogba, and he certainly gave Maddison a tough time in central midfield while also starting a few promising attacks himself.

Soyuncu has had a strong start to the season, but he conceded a clumsy penalty here and was too often careless with his distribution.

United begin their Europa League campaign at home to Astana on Thursday before heading to West Ham in the league three days later. Leicester have a week off before hosting Tottenham.